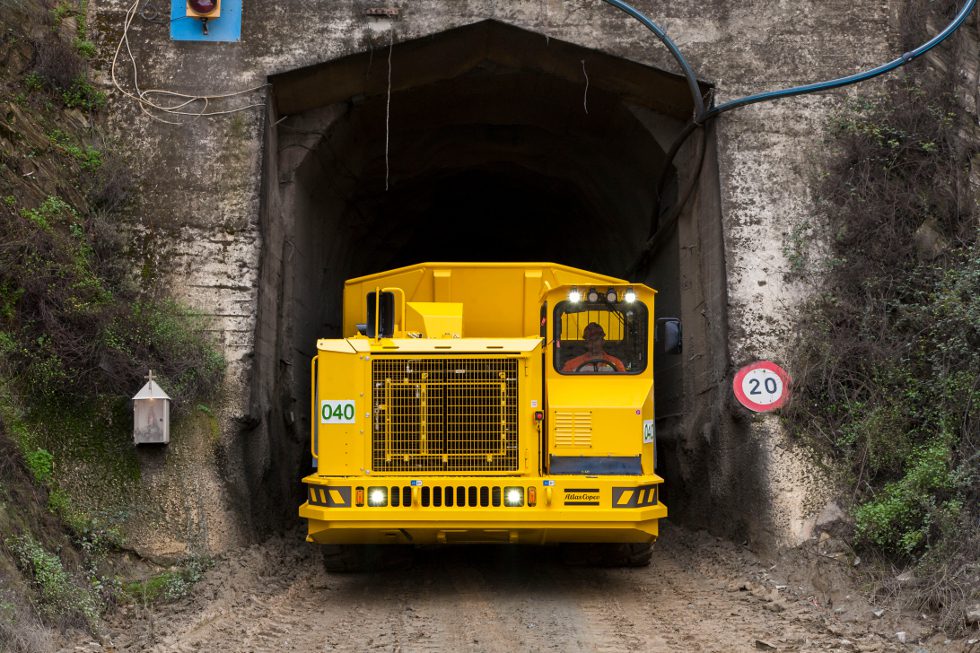 Underground Mining
Bigger is better: These 60 tonne Minetruck MT6020 trucks have increased both capacity and productivity in the haulage operations at Aljustrel mine.

Trucking to the future

Portugal’s Aljustrel copper/zinc mine is back in business and on the road to becoming a world class producer. A strategy to successively increase the capacity and efficiency of the haulage fleet is proving to be a key factor in the mine’s new-found success.

After doubling its production from 1.2 Mt in 2012 to 2.4 Mt in 2015, the Aljustrel copper/zinc mine appears to be well on the road to a brighter future.

Once closed due to the global economic downturn, the mine has clearly been given a new lease of life by the current owners, Almina Aljustrel, and a new management strategy.

One of the reasons for the recent production increase was a strong focus on the efficiency of the haulage operation coupled with a decision to move up from 40 tonne trucks to 60 tonners, starting in 2015 with four Atlas Copco Minetruck MT6020 vehicles.

These trucks, which haul ore from the stopes to underground crusher stations, have not only helped to increase capacity but also to reduce the traffic congestion on the ramps.

The experience has now led to the purchase of three more Minetruck MT6020 trucks, completing the fleet that will underpin Aljustrel’s future development.

Joaquim Barreiros, Production Manager at EPDM, the owner’s sister company in charge of equipment and maintenance, explains the importance of the haulage strategy to production planning.

“Our objective is to reduce the overall size of the fleet by increasing the capacity of the individual trucks, while at the same time enhancing our production by getting more round trips per shift,” he says.

“The Minetruck MT6020 is well suited for this purpose. They are larger and faster and that will enable us to successively phase out our 40 tonners.”

There are two main orebodies at the site, Moinho and Feitais, linked by a 4 km long conveyor tunnel. Both sections are in production using the bench-and-fill method with Atlas Copco Boomer and Simba drill rigs.

At Feitais, production is currently concentrated at the 530 m level and at Moinho on the 420 m and 440 m levels.

In the Feitais section, the trucks haul their loads on a 5 700 m long spiral ramp to the primary crusher at the 190 m level where it is fed onto a conveyor. The ramp is 6 m x 5 m and has a gradient of 12%.

At Moinho, ore is removed from the stopes by a fleet of LHDs, including Atlas Copco Scooptram ST14 loaders, and loaded into trucks for delivery to the primary crusher – a round trip of more than 4 km. From there it is skip-hoisted to the 100 m level where it joins the Feitais ore on the conveyor to the surface and onwards to the concentrator.

The introduction of the MT6020 was a logical progression because despite its 50 percent higher load capacity, it fits into the standard 5 m x 5 m production galleries and achieves better round trip times.

For example, on the 12% grades between the stope and crusher, the truck uses fourth gear under full load, reducing the round trip time to 40 minutes and with a fuel consumption of just 37 lit/h.

Nuno Felix, EPDM’s Director of Maintenance, says he is very happy with the Atlas Copco approach to training, which ensures a continuous supply of specialist drivers for his increasing fleet of Minetruck MT6020 vehicles.

In addition, transitioning from the 40 tonners to the new 60 tonners has made the drivers individually more productive.

For example, Marcelino Bombico and Jorge Cruz work nine hour shifts per day and during a standard shift they complete up to 10 round trips.

Speaking shortly after testing a new MT6020, Bombico told M&C: “When compared to the other machines I have driven, and this includes every truck in this mine, the Minetruck MT6020 is faster, more comfortable and very stable.”

Cruz agrees and also emphasizes the serviceability. “We start the shift by going through the service checklist – oil levels, radiator liquid, lubrication pump, and the general condition of the vehicle,” he says. “This is essential because if any damage has occurred during the previous shift it needs to be identified and recorded as soon as possible. All of this is simpler on the MT6020 because the maintenance points are so well placed.”

Slotting the MT6020 into daily operation on the other hand is not that simple as factors such as vehicle congestion, loading rates, round trip distances and waiting times all have to be considered.

Felix explains: “When you introduce a machine like the MT6020, which is not only faster but also has a 50 percent increase in capacity, you can’t really be precise about its effect. You know it is going to be good, but if you are not careful about job allocation, you will find that the speed variation among different models causes delays.

“We want to see the effect of the MT6020 used together over a period of time so that we can establish the rate at which the older machines can be taken off production. That’s why we are fast tracking the latest
additions into production, and why the driver training programme is so vital.”

As part of Aljustrel’s future plans, its equipment maintenance facility on the surface is being expanded with the addition of a major new service and repair facility. Basic servicing and running repairs will continue to be undertaken at the two underground workshops, one at the 190 m level in Feitais and one at the 335 m level in Moinho.

However, while EPDM has more than 50 maintenance technicians of its own, it has a total service agreement with Atlas Copco for its Scooptram loaders and Minetruck trucks. The trucks and loaders are serviced every 250 operating hours with an overhaul after 10 000 hours. Atlas Copco’s service technicians also service the Boomer and Simba rigs.

These arrangements and the introduction of the Minetruck MT6020 are essential components in the effort to make Aljustrel’s “comeback” both profitable and sustainable.