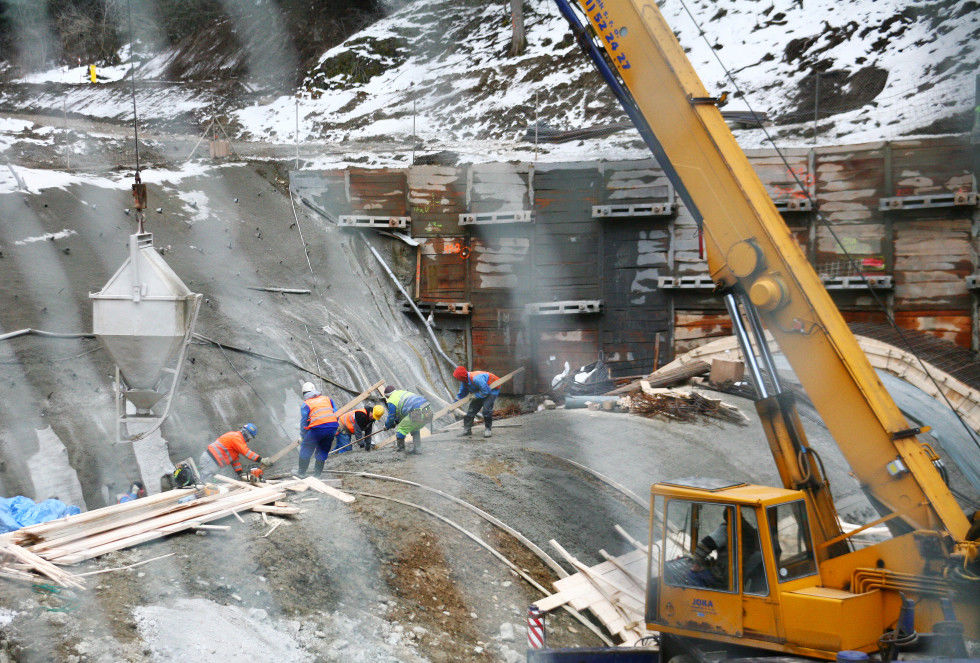 Underground Mining
Constructing the roof of the ’’turtle” entrance to the Považský Chlmec portal.

Located north of the city of Žilina on the D3 highway between Strážov and Brodno, the Považský Chlmec tunnel is one of the most interesting projects cur-rently underway in Slovakia.

The Považský Chlmec tunnel includes two bridges, one of which will pass over the Hricˇovská Priehrada dam and stretch for about 1.4 km, making it one of the longest bridges in the country. This bridge will connect directly with the 2.2 km long Považský Chlmec tunnel and from here motorists will drive onto another bridge, this time taking them over the Kysuca River.

“This means that drivers will travel through approximately 4.25 km of bridge-tunnel-bridge structures without touch-ing normal roads,” says Anton Petko of HOCHTIEF CZ, Production Site Manager at the Považský Chlmec tunnel.
The project aims to divert trafﬁc from Žilina in order to increase the speed and ﬂow of trafﬁc from north to south. The Slovak government estimates that 8 800 cars per day will be travelling along this stretch by 2041. Moreover, the new highway will reduce noise and emissions and contribute to the development of the region.
Financed by the Slovakian state, the entire project will cost approximately €284 million and has been undertaken by a consortium made up of EUROVIA SK, HOCHTIEF CZ and Stavby Mostov Slovakia. HOCHTIEF CZ is responsible for the tunnel construction.
The Považský Chlmec tunnel will fea-ture two tubes with a dual carriageway in each tube. The total length will be 2.2 km (north tube: 2 252 m, south tube: 2 189 m). There will be seven cross passages including emergency passages and two lay-bys. Excavation of the tunnel started at the beginning of 2015 and the construction is scheduled for completion by summer 2016.

Drilling from the center
Excavation has started from the mid-section going in opposite directions towards the western and eastern portals. “Unlike most tunnels, this one is being developed from inside out, rather than the other way round,” says Petko. The construction will eventually be carried out simultaneously from six loca-tions with four faces in the center.
Excavation of the western face started in February this year and preparation work at the eastern portal is currently underway. HOCHTIEF CZ expects about 250 tun-nelers to be working two 12-hour shifts, 24 hours a day, seven days a week.
Similar to other tunnel projects in north-ern Slovakia, Považský Chlmec also has the challenge of being developed in complex and difﬁcult geology. Again, the geology is mainly composed of Flysch, featuring alternating layers of claystone, sandstone and conglomerates.
“The most competent rock here is still quite poor,” says Petko, explaining that the quality varies widely throughout the tunnel alignment. Added to this is the extent of the cross section up to 97 m2 and a maximum overburden of 124 m which requires a huge earth removal operation.
The tunnel is being excavated using the New Austrian Tunnelling Method (NATM), combining drill and blast with hydraulic hammers mounted on excavators. “We expect 80 percent of the development to be done using drill and blast and 20 percent using the hydraulic hammers and excava-tors,” says Petko.
Drilling and blasting is being done with two Atlas Copco Boomer E2 drill rigs, including a new model featuring the latest RCS 5 rig control system. “This is the ﬁrst Atlas Copco Boomer with the lat-est RCS version in Slovakia,” says Pavel Jindrácˇek, Product Manager Underground Rock Excavation for Atlas Copco Central Europe.
The operators received training on this system at the beginning of this year and eventually there will be three Boomer E2 rigs on the site. Two of these will be used for drilling blastholes and one for anchoring.
Drilling, blasting and anchoring is carrie d out in two 12-hour shifts per day. “At the moment, we’re working on one face only but eventually we’ll have several faces open, each going through these three steps. And of course, the length of each step will depend on the geology,” says Petko.
Považský Chlmec also employs two Potenza concrete sprayers from Atlas Copco MEYCO which are used for spraying con-crete as primary lining support after blast-ing and mucking out. The reinforcement work also includes wire mesh, steel arches and radial rockbolts.
The equipment on site is supported by ISOP, Atlas Copco’s distributor in Slovakia, with additional support from Atlas Copco Czech Republic if required. The service contract includes spare parts and consum-ables on site and a response time of up to two hours for a service technician.
“I have worked with Atlas Copco equip-ment for many years, I know the machines are good, but one of the main reasons we decided to go with them is the fact that they’re established in this market and are well placed to offer us the best technical support and service,” says Petko.
“The schedule is a major challenge,” says Petko. “We have to excavate more faces and with 97 m2 of cross section, that’s a chal-lenge in itself as it amounts to lots of muck-ing. But we’re on track!”