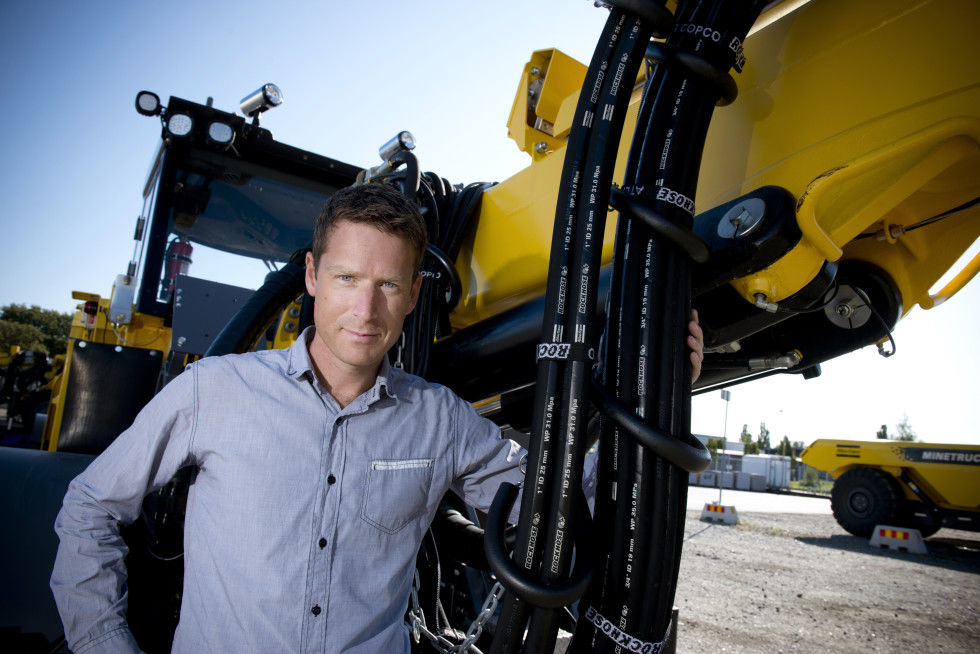 Underground Mining
Mattias Pettersson is a leading member of the Atlas Copco team in Sweden working with the automation of underground mining and tunneling equipment.

Tomorrow’s underground mines will be more remote with orebodies that are difﬁcult to reach and consequently more dangerous to excavate. Against this background, Atlas Copco’s Mattias Pettersson says mining companies have only one option.

Q: How would you summarize the biggest challenge for underground mining?
A: The most important issue is how to excavate minerals and metals in difﬁcult and dangerous environments, and do it efﬁciently and safely. The fact is, many of today’s mines are becoming depleted and the next generation of mines will require a completely different approach in order to be successful.
Q: In what way will these new workings be more difﬁcult to deal with?
A: Firstly, many of them will be located in very remote areas, which means they will be less accessible. Secondly, they are likely to be much deeper than today’s mines with orebodies that are much harder, requiring more complex infrastructure. Thirdly, the challenge of working in deep, conﬁned and unstable areas will inevitably involve more health and safety issues. Environmental and safety regulations are increasing constantly and in all probability, humans will not be permitted to work in such hazardous envi-ronments at all in the future.
Q: So what options do mining companies have going forward?
A: To my mind, there is really only one. They will have to embrace automation tech-nology to the full and there are strong signs that this is already beginning to happen. The interest in and demand for automation is stronger now than ever before, a trend that was clearly evident at the Euro Mine exhibi-tion in Sweden this year.
Q: What are the main advantages of automation underground?
A: Apart from the obvious impact on safety, automation has a central role to play in terms of optimizing the mining operation. For example, automation allows machines to work between shifts, during blasting, and during the night. Optimization naturally leads to increased productivity because you can get more out of the equipment.
Q: To what extent is automation technol-ogy being applied in today’s mines?
A: It’s increasing all the time. One reason for this is that many mines have now greatly improved their communications infrastruc-ture. Ten years ago, hardly anyone believed that a wireless Local Area Network could actually work underground. Now it is more of a given as most of the applications in the ﬁeld of automation require access to a network of one kind or another.

However, we should remember that despite the growing interest in automation, a lot of people are still sceptical. It’s normal to be a little apprehensive about something new and what it might lead to. That’s the way it’s been throughout history, every time a major technology transition has come along. But nobody wants to turn the clock back to the days of hand-held rock drills.
Q: To what extent is automation being applied in the tunneling sector?
A: At ﬁrst glance you might think that automation is more for mining applica-tions because these involve continuous production. That’s true to a certain extent, especially when it comes to remote control. But there is still a great need in tunneling for auto-assist functions that help the opera-tor to be more efﬁcient, such as systems that provide more consistent drilling accu-racy. Monitoring and data logging are also important areas for automation that involve major beneﬁts for tunnelers.
Q: What are the key focus areas of automatio n development today?
A: At Atlas Copco we are concentrating on three areas – the functions of the equip-ment, the operator’s work situation, and the collection and integration of data. When it comes to designing new functions, the only limitations are our own imaginations and the cost of development. We have a great advantage in that all of our new machines are equipped with computerized control systems which enable a large number of automatic functions to be added.
We are also making it possible for the operator’s workplace to be moved further and further away from the worksite. For instance, an operator today can stand 50 meters away from a drill rig to avoid being in an area where there is a risk of rockfall. But he or she can just as easily be located much further away than that. In Chile, for example, one mine placed its Scooptram operators as far away as 80 kilometers from the mine site, and it worked perfectly (see M&C No 2, 2013).
Other examples of Scooptram automa-tion can be found in Canada where it is mainly used as a safety measure to give operators a safer work environment. In Sweden, the LKAB mine operates a ﬂeet of Simba long-hole rigs from one central control room, and there are similar systems installed in Finland and the U.S.
Q: How long will it be before all mines are fully automated?
A: That’s impossible to predict. It is a step-by-step process. But what we can say is that given the current level of demand and development it is likely to be sooner rather than later. By embracing automation to the full, mines can realize huge gains in terms of productivity and availability. It is interesting to note that at the beginning of the1900s, one operator with a handheld rock drill produced 3 to 5 drillmeters per hour. Today, that capacity has increased to around 450 drillmeters per hour by using a drill rig. Now, thanks to automation, we can double that ﬁgure by simply enabling one operator to handle two machines… and that’s only the beginning.
Q: What will be the next innovation in automation for underground miners?
A: We are soon introducing a new system for multi-machine control of underground load-ers which enables one operator to handle several machines simultaneously. However, as the loaders are semi-autonomous, meaning that the buckets are still ﬁlled manually, there is still a limit to the number of loaders that one operator can control.