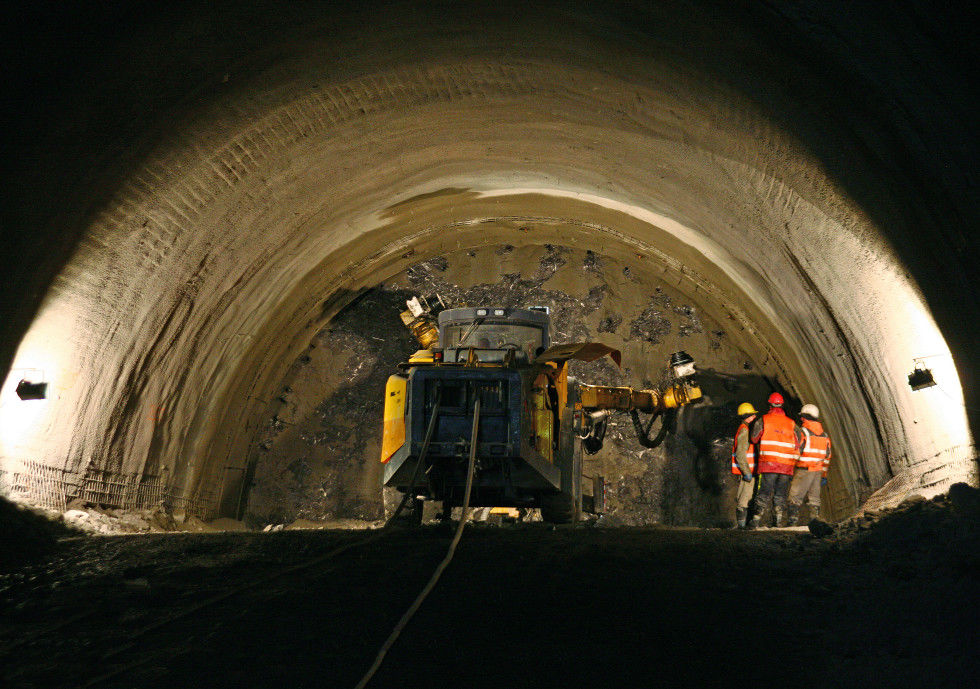 CEBRAT’ – The region’s most demanding task

The new Hubová – Ivachnová section of the D1 highway in Slovakia, which includes the Cebrat’ tunnel, is one of the region’s most demanding projects in terms of engineering, design and cost.

The 15.3 km section passes through dif-ficult terrain with undulating topography and complex geology. The terrain includes part of a national nature reserve, the Tatra National Park, and the Lisková Landslide, one of the most famous active landslides in Slovakia.

At various points, the highway crosses the Váh River and a railway line or runs parallel with the railway line along the riverbank. In total, the section includes 21 bridges and one tunnel, Cebrat’, which runs under the Cebrat’ hill.

“The whole section is very challeng-ing as there is not one kilometer of it that runs continuously over flat topography,” says Pavel Jindráeek, Product Manager Underground Rock Excavation for Atlas Copco Central Europe. By building this section, the government expects to considerably relieve the traffic in the city of Ružomberok, located at the foot of the Cebrat’ hill, as well as reduce traveling time through the region.
Currently, the time required to reach the existing section of the D1 along the original road and through local villages and Ružomberok is 18 minutes. The new highway will cut this to just seven minutes and simultaneously increase safety, improve traffic conditions and contribute to a better environment.

With an estimated cost of €465.7 million, financed by the Slovak government and the European Union, the section is being built by a consortium comprised of Czech company OHL ŽS and Slovakian contractor Váhostav-SK. The contract was awarded in December 2013 and the project is expected to be completed by June 2017.
OHL ŽS is responsible for the excavation of the Cebrat’ tunnel and has subcontracted Slovenské Tunely to help it carry out the work. “We’ve divided it up with OHL excavating the southern tube and Slovenské Tunely excavating the northern tube,” says Tomáš Just of OHL, Site Manager at Cebrat. Cebrat’ will be a twin-tube project featur-ing a 2 026 m southern tube and a 2 011 m northern tube. Each tube will have dual car-riageways in each direction. The tubes will be interconnected by seven cross passages, which are being excavated at intervals of up to 280 m.

Two of these will be located at emergency laybys in each tube to be used by emergency vehicles. The other five passages will be available for pedestrians. The tunnel will have a clearance height of 4.8 m and will be equipped with a modern communication and monitoring system.

The Cebrat’ hill is 1 054 m above sea level and the geology is complex, compris-ing limestone, dolomite, clays, sandstone and marlstone, among others. Apart from short sections at the portals, the tunnel is being driven through variable quality rock.

“Some sections are not too bad but, they’re not great either,” exclaims Just. The strength of the rock also varies, with an average of 25 MPa, including areas with poor rock quality, and there are also occa-sional occurrences of ground water influx to deal with. Excavation work started in September 2014 at the eastern portal of the southern tube. Excavation at the eastern portal of the northern tube started three months later, in December. Just explains that the original plan was to start excavation from the eastern portals and then eventually from the western portals so that the tunnel would be driven from both ends simultaneously.“The geology in the western portals is a real challenge so work has been tempo-rarily stopped while we look at different alternatives, including driving the tunnel all the way from the eastern portal or even extending it,” says Just. Work is expected to resume in the fourth quarter of 2015, but they are pressing ahead with the rest of the tunnel. Work at Cˇebrat’ is carried out seven days a week, 24 hours a day with two, 12-hour shifts per day. More than 2 km of the Cebrat’ tunnel have been excavated using the New Austrian Tunnelling Method (NATM). Advance rates depend on the quality of the rock. “The quality varies so much that we could easily have a meter of poor quality rock followed by 2.5 m of good quality rock,” says Just. As a result, the rock is sometimes broken using drill and blast and sometimes using an Atlas Copco MB1700 hydraulic breaker on an excavator.

For drill and blast, two Atlas Copco Boomer E2 drill rigs are used. Ján Klein, of Slovenské Tunely’s Maintenance and Equipment Manager at Cebrat’, explains that the rigs are also used for drilling the holes for rock bolts.

In one 12-hour shift the rigs are normally at the tunnel face for two hours and then drilling for bolting for one hour. The excavation face is divided into top heading and bench with the top heading 5.4 m high. In terms of support Cebrat’ uses a mix of primary and secondary lining with the first layer of concrete 100–250 mm thick and a secondary lining of reinforced concrete in the portals and in sections with poor geology.
In addition, welded mesh of one or two layers is used along with lattice girders and grouted self-drilling anchors 3–6 m long as well as Atlas Copco Swellex bolts.

For the concrete spraying, Cebrat’ uses two Meyco concrete sprayers – a new MEYCO Potenza, currently being used in the north tube and a second-hand MEYCO Spritzmobil, currently being used in the south tube.
The tunnel ventilation is ultimately designed as a longitudinal system with six pairs of jet fans. During excavation, ventila-tion is provided by one fan in each tube. For the project, Slovenské Tunely acquired 500 m of new Atlas Copco 1.8 m diameter flexible ducting to use with the fans they already own.

Slovenské Tunely has a service contract with ISOP, the Atlas Copco distributor in Slovakia, which includes a response time of 6 hours for any major service issue as well as spare parts and also includes trainin g for the operators, on both the Boomer E2 and Meyco concrete spraying equipment.