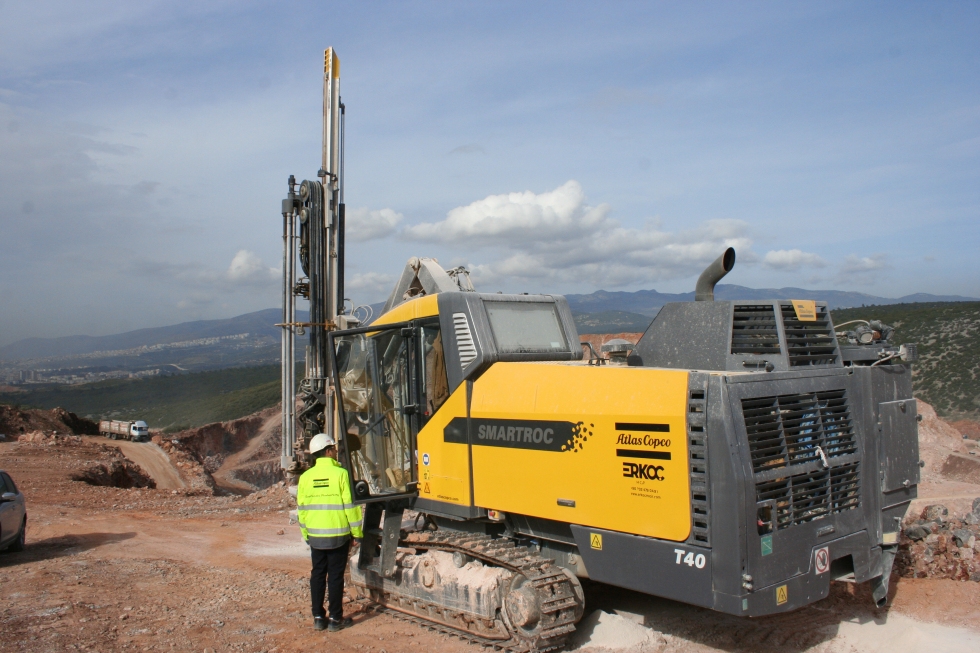 The introduction of Atlas Copco’s SmartROC T40 drill rig is helping Turkish contractors to slash their fuel bills and improve their productivity – and the word is spreading fast.

With fuel prices among the highest in the world, many Turkish contractors find it difficult,  if not impossible, to keep their running costs under control. Today, however, an innovation from Atlas Copco in the form of the SmartROC T40 surface drill rig is making a significant contribution, enabling drilling contractors to drastically reduce their fuel bills, in some cases by as much as 50 percent.

The quarrying company, Erkoç Kırmata şA.ş, is a typical example. This well established family firm operates a limestone quarry in Bornova-Izmir city where it has been producing aggregate and limestone products for more than 40 years.

The quarry produces around eight million tonnes per year. However, like many similar businesses in Turkey, the biggest cause for concern is the price of diesel fuel which is the second highest in the world, after Norway.

Consequently, when the company learned that Atlas Copco had developed a new energy efficient drill rig, Erkoç Kırmataş was happy to be the first to put it to the test.

Owner Burak Erkoç explains: “They told us this rig could cut our fuel costs in half and of course we were sceptical. We didn’t think it was possible, but we were prepared to give it a try.”

Erkoç Kırmataş already had a fleet of Atlas Copco drill rigs in operation and the ground conditions at its quarries, which are characterized by fissures and cavities, are a constant challenge for both rigs and drill steel. Any opportunity to reduce running costs in this harsh environment was welcome.

Two rigs combined into one

The SmartROC T40 arrived on the site during the summer of 2013. One year later, it had become a permanent member of the equipment fleet, producing as much as two other drill rigs combined. And even more important, it drastically reduces the company’s fuel bill with every shift.

“When we first considered buying the SmartROC T40, people in the industry were talking about machines that could save one liter per hour,” recalls Erkoç. “However, during a test run at our quarry, our fuel consumption dropped from 37 liters per hour to 13 liters per hour, with the lowest being 12.81 liters per hour. If we didn’t believe it before, we do now! SmartROC T40 is an innovation that lives up to its claims.”

The test results were equally positive even when high performance was prioritized over fuel efficiency. “Even when we operated the rig at full capacity to get the highest possible productivity, the fuel consumption was still only 17 liters per hour,” Erkoç exclaims. “That’s excellent for us. At that rate, we estimate that the rig would pay for itself in 15 months, just through the savings we are making in fuel costs.” So far, the rig has drilled about 25 000 m and has about 600 hours on the tophammer rock drill. An added bonus is that the rig’s wear and drill steel consumption have also been reduced.

Says Erkoç continues: “We have now deactivated all the other drill rigs and are using just the SmartROC T40 six days a week in two, seven hour shifts. Considering how productive it is in a 14-hour day, I think it could probably finish all the work in the quarry if we used it round the clock.”

The working environment on the site has also improved since the SmartROC T40 arrived, particularly since the reduction in fuel consumption also lowers the rig’s CO2 emissions. Furthermore, its adjustable dust collector and quiet-running drilling system has made a big difference to the level of noise and dust.

Erkoç says: “Sometimes, depending on the direction of the wind, the only way I can tell that the machine is actually operating is by the rotating warning lamp on the top!”

Operator Çetin Bayram also praises the benefits to the working environment. “The low noise, comfortable cabin, easy controls and easy trouble-shooting are big plus points,” he says. “I feel safe and comfortable in this rig, and that helps me to be more productive.”

Emre A. Kantarcı, Atlas Copco Sales Engineer in Turkey, emphasizes that the SmartROC series has been designed specifically to minimize energy loss. This is thanks to features such as the adjustability of the air volume and dust collection vacuum fan speed, which enable the operator to optimize energy consumption during the process.

Added to this, the SmartROC has 50% fewer hydraulic hoses and 70% fewer fittings, compared to the previous models, and the newly-designed hydraulic system uses 65% less hydraulic oil. Consequently, the best performance can be achieved while only using the precise amount of energy required for each task, and no more.

Gurkan B. Buyurgan, Business Line Manager in Turkey, concludes: “All of these innovations and advantages add up to a pleasant surprise for the drilling industry. We are proud of this technology and that we have been able to introduce it to Turkish contractors since the end of 2012 when the SmartROC series was launched.”