The black heart of the Blue Ridge Mountains

In the Blue Ridge Mountains that span the states of Virginia, West Virginia and Kentucky, seams of coal flow through the ground at varying depths. Virginia Drilling Company knows just how to reach them.

Virginia Drilling’s business philosophy has developed over time but has remained simple: “We focus on what we do best and surround ourselves with experts,” says Verlo Stiltner, founding partner and company president.
In 1998, Stiltner and his partners David Hale and Mike Sheets started Virginia Drilling to diversify their existing blasting business, Austin Sales, owned by Hale and Stiltner. The company began as a contract driller on construction applications with ECM 490 and ECM 690 crawler rigs. Today, its drilling fleet has grown to include
28 DM45s, nine DMLs and seven crawler drills of varying size, all from Atlas Copco and a further 18 drill rigs are on order.

Virginia Drilling is now the largest, if not the only, contract driller in the US focused primarily on the coal industry and has firm plans for future growth through strong leadership, committed employees
and strategic partnerships.

Moving to coal
Through their existing blasting business, the founders knew everyone in the coal ‘fraternity’ and the new company was soon asked by a coal producer to use its expertise in the coal field. The premise was to blast economically, work efficiently and to maximize outside resources. The goal was to drive costs below the industry average and increase utilization of the
drilling equipment. Clinton Evans,Virginia’s Chief Operating Officer, pointed out that they had lots to learn when it came to drilling and decided to work closely with drill dealer Brandeis Equipment to develop a maintenance program.

Atlas Copco drill rigs were chosen for their reputation and also because Virginia Drilling needed a strong dealer that
could take care of every aspect of the drill rig including parts and support. According to Brandeis’ Branch Manager, Barry Justice, 40 per cent of the firm’s parts inventory is for Atlas Copco
drills. “If the drills don’t run, the whole mining process stops,” he says. 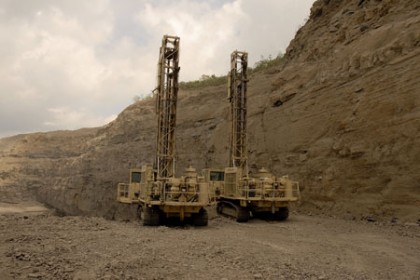