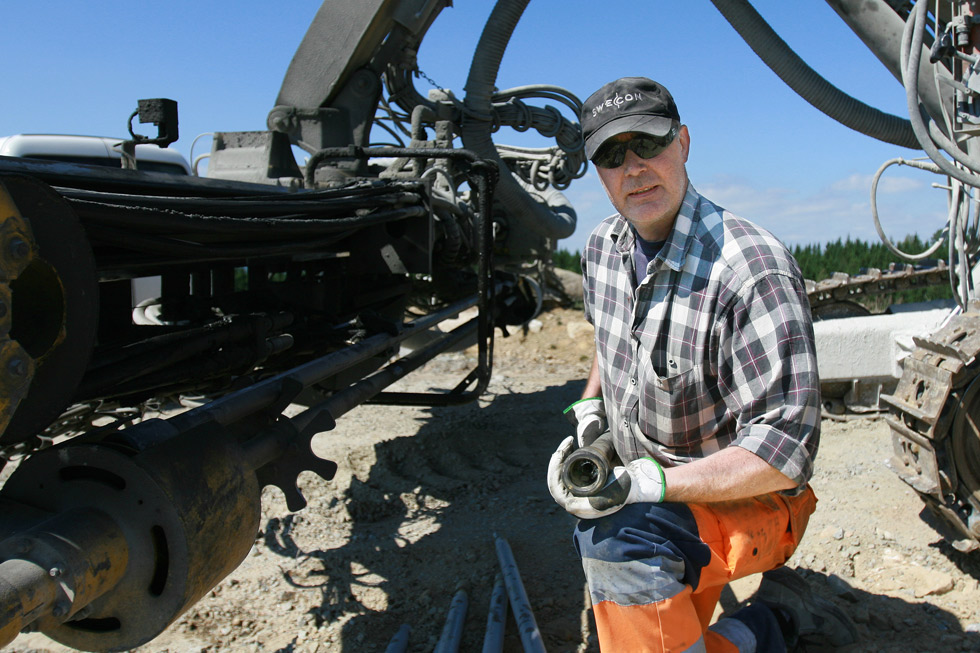 Quarry (aggregate)
“T-WiZ represents a huge saving on time, material and effort,” says Frederick Winroth, one of the first drillers in the world to test the new T-thread system

At the Marbäck stone quarry in Sweden, the newly arrived T-WiZ drilling system is helping Voglers AB to boost productivity.

A steep and narrow track runs along the ridge of the Marbäck stone quarry in southern Sweden, leading to the highest point overlooking a crushing facility, an aggregate plant and forests and lakes in the far distance.

Perched on fractured rock just before the edge of an 80 meter drop, a SmartROC D7C is performing tophammer bench drilling equipped with the latest rock drilling tools with T-thread technology from Atlas Copco Secoroc that is helping to drill blast holes as deep as 28.5 m.

Huge savings
Launched at the end of 2011, T-WiZ has set a new benchmark for performance in surface and underground mining operations. The system consists of drill rods and shank adapters that offer greater stability and up to 30 per cent longer service life, which means that fewer rod changes are required.

“The longer life span of the T-WiZ rods converts into huge savings on time, materials and effort,” says Frederick Winroth of Swedish drill and blast contractor Voglers AB, who was among the first drillers to try out the new T-WiZ system.

The Marbäck quarry site, some 4 km south of the town of Ulricehamn, provided an ideal environment for demonstrating the patented T-WiZ drill system. Since 1994, when the site opened, Marbäck has been producing hard, grey gneiss aggregate to be used for concrete ballast in road construction applications.

“I first got the new T-WiZ rods while working at sites in the Gothenburg region,
before the shank adapters were even available,” says Winroth. “When I had the full system, it all worked perfectly and the benefits were impressive.”

Having kept a close track on the performance of T-WiZ and comparing with previous equipment, Winroth shows the documented data using different drill bits where he notes an average penetration rate of 1.5 m/min.

He explained: “Normally it takes at least 30 minutes to back away from the blast hole, set up the rod collector and change drill rods. So minimizing the number of rod replacements makes a big difference to bottom-line production. Previously, I would also count on having to struggle to uncouple the drill rods. Now you just press the release button and the T-WiZ rods break away easily.”

No margin for error
When M&C visited the site, a first section of 76 mm diameter blast holes had just been completed using the T-WiZ system. “It was a challenge,” said Winroth and pointed out the sloping terrain and difficult rock formations. To position the drill rig he used an anchor and winch.

“At these depths there is no margin for error. You have to achieve as close as possible to 100 per cent straightness so that the explosives match the hole. Getting it right makes all the difference between giant boulders or gravel when blasting,” he said.

When each hole is completed it is sealed with a cone plug to prevent rain, snow and dirt from entering. To minimize downtime, a back-up set of T-WiZ drill rods are stored at the site, as well as extension rods that can be used for an additional 3 – 4 m of drilling.

During drilling, the majority of wear and tear is placed on the drill rod, and although the operation is monitored through the rig’s Measure While Drilling system (MWD), Winroth was relying on his experience to manually inspect the equipment and the seven drill rods in the rod handling magazine.

“Blue smoke or percussion with a hollow sound are typical signs of drill rod faults as a result of loose joints, overheating or both. With T-WiZ, I haven’t noticed any of that,” he said. “This batch of T-WiZ equipment has completed about 7– 8 000 drillmeters and is still performing well.”

Cutting downtime and boosting productivity is what T-WiZ was designed for, and with automatic rod changing and less manual work involved, Winroth was confident that the next three rows of blast holes would be completed within three weeks.

“Thanks to the long lifespan of T-WiZ, 300 drillmeters per day is not a problem,” he added. “Downtime has also been minimized which means that the company achieves more holes in less time and that’s also positive for me.”