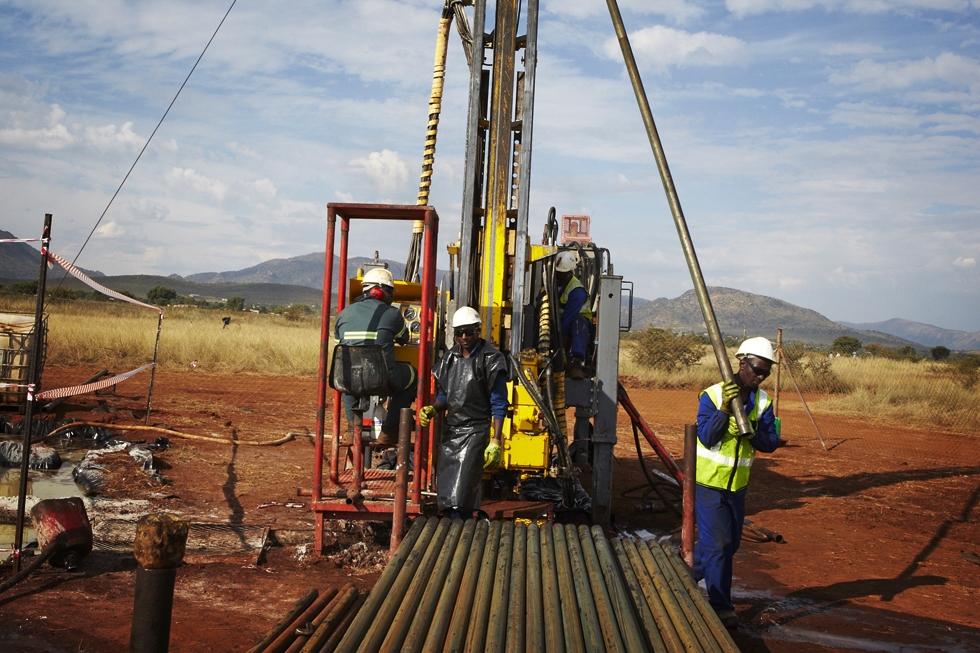 Mining
Team spirit: Each member is taught to do things correctly and safely to protect each other and the environment.

Like many African drilling companies, there was a time when Zaaiman Exploration Drilling prioritized profitability. Today, the company has a somewhat different approach to business: a total commitment to safety as the key to success.
“It’s a complete turnaround for us,” says General Manager Flip Roux. “We were one of those companies that thought safety was a bit of a burden. Then about five years ago, after an accident involving some of our peopl­e, we came to the conclusion that safety was actually the key component to profitability and further development.”
It was a realization that completely changed the company culture. Zaaiman started by developing its own internal training courses for drillers. With support from Atlas Copco with regard to drill rig design and operating procedures, this effort has now evolved into a full-fledged qualification program that is unique in South Africa and formally recognized by the South African Qualifications Authority (SAQA). In addition, Zaaiman plans to make the program available to other drillin­g companies around the country.
A family-owned company, Zaaiman is based in Witbank, 130 km north east of Johannesburg. It is able to perform core drilling operations anywhere in Africa but is currently focused on the South African provinces of Mpumalanga, Gauteng, KZN and Limpopo. It has 43 fully equipped core drilling rigs in operation including the world’s largest fleet of new Atlas Copco Christensen CS series.
In this mineral-rich area, the company serves clients such as Anglo Platinum and Platreef, Ikwezi Mining and BHP Billiton, as well as a string of coal mining companies including Total Coal, Anglo Coal and Xstrata Coal.

Far-reaching implications
M&C asked Flip Roux to explain the philosoph­y behind the company’s safety strategy and the implications for Africa’s drilling community.
“Safety is becoming more and more importan­t. It concerns our people, the environment and the places where we work. It became obvious to us that in order to raise standards we needed to offer our people a qualification system which goes hand in hand with safety. If you’ve got a properly skilled and qualified person then naturally that person is less likely to make mistakes.
“At our own training center we have now develope­d two qualifications and we are busy developing even more. We are currently the only drilling company in the country that is able to present formal drilling qualifications for its people, and for our drillers it makes a huge difference. They are very excited about it because it means that drilling is no longer just a job, it is something that is becoming a proper career. We have set the drillers on a clear career path which will help them to grow and develop in the drilling community.
“They can do certain parts of the course right away and then add to it, right up to the point where they have a formal qualification and they can ‘fly’. After that, they can grow into the next qualification and the next.”

A new perspective
This safety-first approach has changed the perspective of drilling among Zaaiman’s drillers, says Roux. “Previously, if someone offered one of our drillers another 10 Rand on their salary it was purely a financia­l decision. Now they stay with us – not for the money – but because of the opportunity they have here to grow into the industry, to develop as professionals and be acknowledged.
“Every person that gets a certificate on the way to a formal qualification is a very happy person. They know they are doing the right thing. This is not like being told to do something. It is something that has been designed for their benefit, something they can learn from and which actually gives them something in their hand that they can use. They can go to another company, present their qualification and say ‘this is what I have done and this is what I still need to do in order to be the best driller I can be’.
“But it’s not only qualifications that matte­r. It’s also important to us that we can prove that our people are properly trained not to cause harm to themselves, their colleagues or the environment.”

Safety is teamwork
Zaaiman rig operator Happy Makwana is a team leader on the company’s Atlas Copco Christensen CS3001 rig and embodies the new attitude among the company’s drillers.
“Safety for me and my team is everythin­g. When you start work at 6-oclock in the morning you have to be sure that every member of the team knows what to do. We have to be able to rely on each other to do things right. Anyone who can’t work safely as part of a team will not get a job here.
“We feel proud to be employees here because we know that we will develop and grow and grow and never fall.”
“It is also important to show that we can work in a responsible way and help the company to improve every year. We want to be the top one in this business.”
He adds that the Atlas Copco Christensen rigs also play an important role. “The Atlas Copc­o machines are one hundred percent safe,” he says. You don’t have to deal with heavy things with your hands or your feet. On some machines they have something called a footclamp where you have to use your foot to hold it open. With the Atlas Copco machine you just use the levers.
“It’s the same when you have to add a rod or tube, you don’t have to use your hands like other machines, you use the winch. Dependin­g on the rig. You can add nine, six or three meters, whatever you want using the winch. Also, the winch and other parts have protective guards so you can move around freely without worrying about catching your clothes or injurying yourself.”

Profitable strategy
The strategy is also paying off for Zaaiman. Says Flip Roux: “Our staff turnover is in single figures and our lost time through injuries is low. Our drilling teams are totally committed to safety and can be relied on and we are improving our drilling figures on a daily basis. It has also put us in a position where we can now train operators at other companies in southern Africa and I think that will soon become a major part of our business.”
He concludes: “Safety is definitely profitable. Sometimes it might feel like a bit of a drag, but if you do it properly and make sure that all your people do the right thing at the right time and do not get hurt in the process, it will benefit the whole business.”