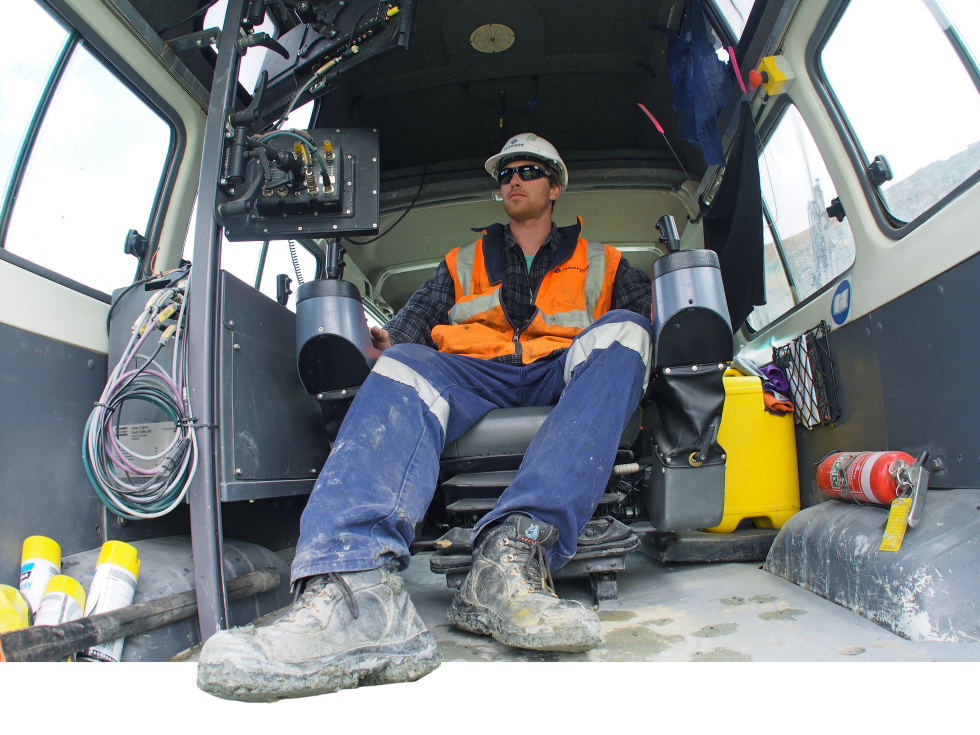 Increases safety with BenchREMOTE in Savage River Mine

The Savage River mine has taken its focus on safety another step forward with the installation of a mobile, remote control station for drill rigs.

After four straight years with no lost time injuries, the Savage River iron ore mine on the west coast of Tasmania is justly proud of its safety record. This open pit operation, owned by Grange Resources, has consistently put safety first in bench drilling and blasting.

Now this operation has been made even safer with the introduction of a mobile, remote control station allowing an operator of an Atlas Copco SmartROC D65 drill rig to control the entire drilling process from a distance.

This Atlas Copco innovation, called BenchREMOTE, replicates the controls in the cabin of the rig. It can be mounted in any mine vehicle or dedicated mobile cabin and can be operated at distances of up to 100 m.

Grange Resources decided to put the station to the test at Savage River and installed it inside a vehicle similar to a camper. From this “virtual cabin”, the operator was able to perform all drilling operations successfully at the full 100 m distance range from the drill site.

This capability is of particular importance at the Savage River pit as it is located in a region frequently subjected to heavy rainfall that from time to time can threaten the stability of the benches.

As a result, the mine’s BenchREMOTE station is an added safety measure on the site and is mainly used when the SmartROC D65 needs to drill near the high wall of the pit, removing the operator from the area and the potential danger of falling rock.

“We are using the BenchREMOTE station up to 50 percent of the time in both the south and north pits,” says John Crockett, Grange Resources’ Mine Superintendent, adding that the rig’s HNS (Hole Navigation System) eliminates the need to mark up the holes manually.

“We also have a remote charge unit so people can be further away from the high wall,” he continues. “BenchREMOTE is the ultimate in hazard reduction and completely removes the risk. It’s the way of the future.”

From his virtual cabin, the SmartROC D65 operator monitors and controls the rig via a closed circuit WiFi network which is independent of the mine’s communications infrastructure.

In addition, the SmartROC D65 rig’s functions of auto-collar, auto-position, auto-drill and rod changing ensure accurate and productive drilling while following the drill pattern which is loaded via USB.

“It’s awesome!” says Ben Whish-Wilson, the rig’s operator. “It’s got a good camera so you can see everything that’s going on and it’s real-time and responsive. Basically, I have the same level of control (as in the rig). I especially like the auto-pos button which straightens the feed and the autodrill’s good, too.

” With today’s lower iron ore prices, maintaining access to high grade ore, mine development and focusing on costs are top priorities at Savage River. Against this background, the addition of a BenchREMOTE station is more than just a way to increase safety. It allows the mine to access ore which otherwise would have required the gradient of the high wall to be reduced and a lot more waste rock to be blasted.

The remote station is currently being used together with one drill rig, but can be set up to allow one operator to control several rigs in parallel, potentially boosting productivity.

John Stanton, Tasmanian Branch Manager for Atlas Copco, says his team in Burnie  provides the mine with the necessary backup in terms of rig maintenance, parts, service exchange and training support. He also adds that the mine’s SmartROC D65 will soon be equipped with Rig Remote Access, enabling data to be transmitted and received via  Grange Resources’ own local area network (LAN).

Whenever bench stability in open pit mines is in doubt, the smart move is to get drill rig operators out of the danger zone. Atlas Copco’s SmartROC remote control station BenchREMOTE allows them to do just that to increases safety. This mobile replica of the rig’s cabin enables operators to carry out all drilling tasks at distances of up to 100 m from the hole.

The control console is identical to the one in the rig and the display screen provides the same overview of the hole position. In addition, as this “virtual cabin” can be mounted on a trailer it can be easily towed and set up in the best position.

BenchREMOTE operates via a closed circuit Wifi network that is independent of the mine’s LAN network and in the future it will also be possible to control up to three rigs from one single station.