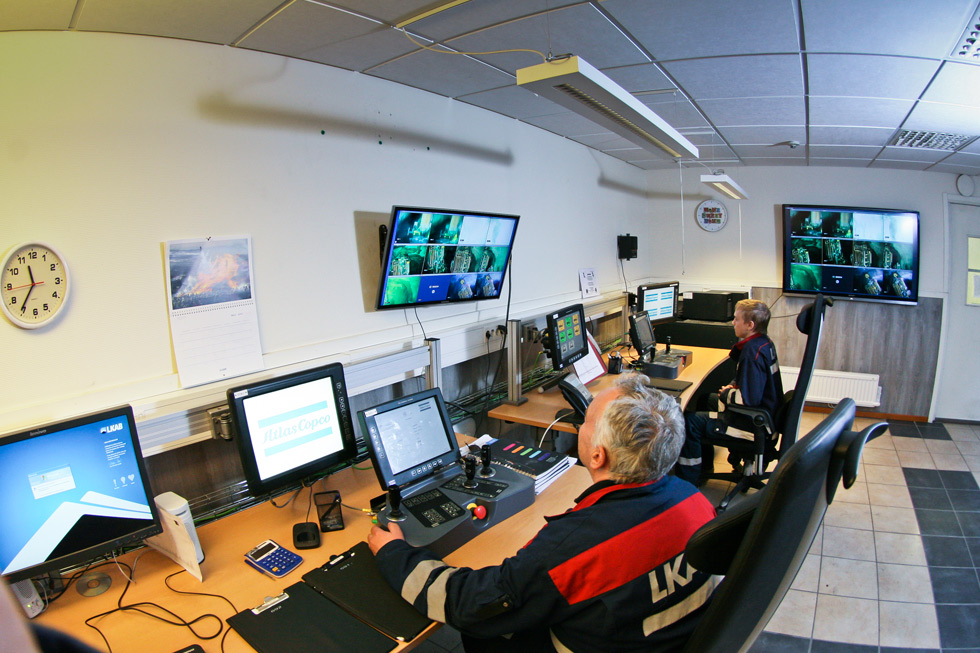 Underground Mining
The Malmberget control room where each operator is in charge of two Simba drill rigs.

LKAB’s Malmberget iron ore mine in the far north of Sweden is now making its mark on the future of underground long hole drilling using automated Simba rigs from Atlas Copco.

The early morning coffee has just brewed. The air conditioning is perfect. Ergonomic office chairs and comfy footwear await the operators who are about to start another shift. This is life in the world of automation at Malmberget.

Located about 5 km from the town of Gällivare in Sweden’s far north, Malmberget, or The Ore Mountain, is one of two iron ore operations run by state-owned LKAB, and is now a model of modern mining, not least for its automated, long hole drilling.

The control room at the 1 000 m level, with its computer monitors on the walls and desks, joystick controls, keyboards and data servers, reflects the progress that has been made here. It was recently set up to track and manage the performance of a new fleet of automated drill rigs that are in continuous operation, all year round.

For this task, three operators working seven day shifts are in charge of two drill rigs each. They drill 115 mm diameter blastholes in drifts 5.5 m wide x 5 m high. The team is led by Bengt Anttila, Production Supervisor, South Section. Anttila has more than 40 years of experience at Malmberget and has witnessed many of the mine’s development milestones, among them the transition to large scale, sublevel caving in the 1980s, and the introduction of automated production drilling in the mid-1990s.

He explains: “We have been working very closely with our sister mine, the Kiruna mine, which has been a forerunner in automated drilling. When the first projects started, Kiruna already had automated skips and rail transport. Malmberget followed their example in 1997 when we took delivery of the first BK drill rigs.”

BK was the name given locally to the first automated Simba W462 rigs which were developed together with Atlas Copco, marking the beginning of a long lasting cooperation. (The “W” is for Wassara, the highly efficient, water powered DTH hammer).

New phase in progress
LKAB adopts a zero tolerance approach to injuries and the planners at Malmberget, which has 1 300 employees, do their utmost to reduce the number of miners working in hazardous areas. This, in turn, has been a driving force in the development of automated drilling, coupled with the need for extreme precision in long hole drilling.

Now the mine is in the middle of another transitional phase consisting of a generation shift towards younger operators with a flair for technology, and a major equipment upgrade by replacing the “BK” fleet with six new Simba WL6 C rigs.

Apart from being more powerful, the Simba rigs offer a wide range of new features including what the miners call “full fan” automation. Not only that, the rigs are equipped for teleremote operation using a new data system and interface, taking operators out of hazardous mining areas.

This capability has enabled Malmberget to follow in the footsteps of its sister, the Kiruna mine, where full fan drilling with Simba rigs and teleremote operation has already proven its worth.

Continues Anttila: “We knew that this would probably be the most challenging year so far in the history of Malmberget as we were not allowed to lose any drillmeters during the transition. As a result, we had to replace the old rigs step by step while trying to maintain production rates day and night.”

During M&C’s visit to the control room at the 1 000 m level, one of the six new Simba rigs was drilling into the Alliansen orebody at the 1 022 m level. The mine had achieved full fleet capacity and it was expected that the new fleet would result in a production increase of 20%.

It’s all in the fans

Malmberget has about 20 orebodies extending across an area of 2.5 km x 5 km, of which 12 are mined, most of them consisting of magnetite ore.

Upward drilling with full fan automation is provided by the Simba rig’s computerized Rig Control System (RCS), operating in the ABC Total mode, enabling drilling to be carried out throughout the night when no personnel is present in the mine.

The typical length of the drifts is 85 m which allows for around 25 fans. Each fan consists of 8–10 holes and is drilled 3–3.5 m apart, with a double fan drilled close to the footwall to enable maximum ore recovery. The holes are typically 45–47 m long and are drilled with a maximum deviation of 1.5% with 115 mm diameter bits and 2.3 m long drill rods.

“We can drill 55 meter holes but we rarely go beyond 50 meters,” says Anttila. “For blasting, it is crucial to get the holes absolutely straight, which the Wassara hammer helps us with, but the angle of drilling also determines the material flow. We drill at 80–85 degrees and 85–90 degrees for the final double fans.”

The holes are charged with emulsion explosives and blasting takes place every night between midnight and 2 am. Three fans are typically blasted per round with each fan yielding approximately 6 600 tonnes of ore.

Preventive maintenance is key
Malmberget has a full service agreement with Atlas Copco for all of its production drill rigs and the service team was due to move from premises in Gällivare into one of the main workshops in the mine.

Although full fan automation enables drilling to continue through the night – adding significant value in terms of production meters – downtime is more costly than conventional mechanized drilling where an operator can immediately attend to an issue. However, in the case of breakdown during the day, service personnel can be on site within 30 minutes, but only if needed.

Anttila says: “Preventive maintenance is the most important factor for a high level of automation in mining. Comprehensive schedules, routines and checklists are a must. Without them, automation will not work. The problems we have with the rigs are often small things like dirt jamming up the stinger feeders, easily fixed by a driller on site with a few tools in his belt and by flushing, but it’s not easy if no one is there.”

Another important task is to stockpile parts ordered in advance, and to inspect the equipment before service. “We have a set schedule whereby inspections of the equipment are carried out on Mondays and spare parts are sourced during the week, with service being performed on Fridays,” says Anttila.

Since Malmberget took delivery of the sixth Simba WL6 C rig the operators in the control room have been refining their skills to meet a strict production target of 350 drillmeters per rig, per 24 hours. This is equal to 2 100 m per week.

Operator Andreas Larsson, who has two years of experience in production drilling at the mine, adds: “The new system gives you the feeling of being in complete control. We set the drilling parameters before we leave at night and then check all the logs in the morning to see if there have been any errors, and if necessary we follow up with troubleshooting.”

Teleremote allows the rigs to be operated with the aid of continuous video supervision and a laser guidance system. The operators have access to the same information that is shown on the rig’s monitors. At Malmberget, the system is used for rigs located 1 to 6 km from the control room. Communication is via both LAN and WLAN and the rigs’ interface, known as Rig Remote Access (RRA), enables the seamless transfer of drill plans, log files and messages to the rig’s control system.

Increased safety
By increasing the level of automation, Malmberget has increased safety by minimizing the exposure of its personnel to danger in the production areas. However, there are still situations when operators need to be in the drift, for example to reposition the rigs for the next fan or to deal with stoppages. For this reason, the rigs have motion sensors that immediately shut down the drilling if someone gets within a radius of two meters.

“This is the tricky aspect of automated drilling,” says Anttila. “As long as the drilling goes smoothly there’s not much to worry about. But when something happens to the rigs, a broken hose or if the drill string gets jammed, it is vital that the operator has the experience to make a 30 second risk analysis before entering the drift.”

Also on the operator team is Fredrik Bäck. He says: “Being in the control center you absolutely get a sense of working in the mine of the future. It’s the best job you can have underground.”

The IT challenge
Among the biggest challenges for mines seeking to bring automation to their operations is to set up IT systems that can be applied to a variety of equipment and different software. At Malmberget, this task is approached with the same dedication as the day-to-day drilling, blasting and hauling. For the time being, Malmberget’s priority is to expand WLAN communication in all areas of the mine and further develop the monitoring capability for production drilling.

Magnus Abrahamsson, Project Manager, Automation, says: “Our aim is to develop the systems so that operators in the control room can monitor not just the performance of the individual rigs but also get a full overview of production rates. We also want to enable instant connection with workshops so that operators can show production data to service personnel in order to solve problems as efficiently as possible.”