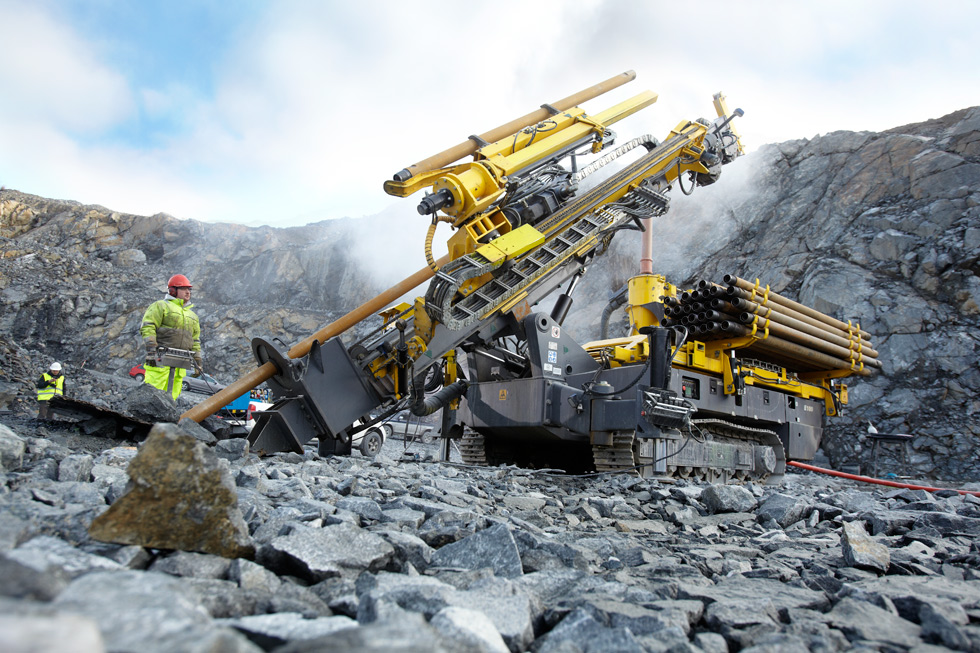 The largest pure gold mine in northern Europe, Björkdalsgruvan, expects continued strong demand and is gearing up for future production using the new, compact Explorac 100 drill rig from Atlas Copco.

Whether in good or bad times, few global commodities capture the imagination like gold. And despite the drop in prices this year, mines are expecting demand to remain stable.

Among the mines whose operations are thriving is the Bjorkdal mine, or Björkdalsgruvan as it is known locally, tucked away in the deep forests of northern Sweden some 40 km northwest of the town of Skellefteå.

Since prospectors first struck gold here in 1983, the mine has witnessed a near continuous expansion, and modern mining equipment increasingly plays a key role in maintaining high productivity levels.

Quality is equally important and follow­ing the mine’s acquisition in 2012 by Canada’s Elgin Mining Inc., a grade control project was initiated to plan for future blast holes that would help determine the path for up to five years of continued production.

During an initial six month period, geologists and drillers came together to track the ore which is found in veins that extend like a spider’s web through a rock mass with high quartz content.

Styrud Arctic, based in the town of Kiruna, is a leading RC drilling contractor in the region and saw a golden opportunity to provide rock samples in the form of chips usin­g the latest exploration technology – the Explorac 100.

The Explorac 100 is a new generation exploration rig and replaces the Explorac R50, a workhorse that has been familiar to miners for more than 30 years. It is an extremely compact rig – just 7 800 mm long, 3 000 mm wide and 2 300 mm in height – and features a labor saving rod handling system.

“Safety is the first thing our customers ask us about today,” says Joakim Kemi, Project Manager at Styrud Arctic, who supervised the testing of the Explorac 100 with the aim to update the company’s fleet.

“The rig has an automated rod handling system which has enabled major improvements. It greatly reduces manual work and thereby the risk of accidents as our operators don’t have to use a crane to lift and mount the drill rods which weigh 78 kilos.”

The Explorac 100 is a far cry from how gold was graded in the pioneering days of the Klondike. It drills 140 mm diameter holes to a precise depth of 32 m. It is operated by a team of three with one man for each task; drilling, rod handling and ore sampling. A cyclone unit mounted on the rig delivers one ore sample per meter. These are carefully collected in bags, separated into boxes according to a numbering system and delivered to the company’s onsite geologist before being sent on for further analysis.

According to Andreas Hansson who operates the Explorac 100, the team achieves a production rate of three to four holes per day resulting in 90–128 sample fines, which well exceeds the required two holes per day.

“This can vary from week to week,” he says. “We’ve recently had a lot of excess rain and groundwater to deal with which is a challenge, both in terms of drilling and sampling, as getting water in the cyclone will contaminate the samples.”

In order to prevent the risk of mixing new and old samples in the cyclone, extra precaution is taken to eliminate water by using the rig’s powerful blow-down system before each new drill rod is connected.

Hansson continues: “The Explorac 100 has excellent hydraulics and is also energy efficient. We typically run the engine at 1 500 rpm and diesel consumption is about five liters per hour, which is very low. It’s also a quiet machine which makes it nice to work with, especially here at Björkdalsgruvan which is the best work place I’ve had,” he says.

The low noise emission is the result of a fully enclosed power pack design that holds a Tier 3A diesel engine (82 kW at 2 200 rpm). For each 32 m hole, 11 drill rods are required and the automated rod handling system does the job well, operated from a second control panel.

Smooth operation
Hansson adds: “The machine took some getting used to but now we’ve got a reall­y good work flow. The mast is made for angled drilling at 45 degrees and we usually take it to an upright position when changing the bit.”

Another main design feature is the mechanized breakout system with its hydraulically operated key suitable for 4.4″, 4″, and 3.5″ drill pipes. Apart from eliminating the use of handheld keys when replacing the drill bit, a new safety cage reduces any risks of injury.

Lena Printzell, Open Pit Geologist at the mine, coaches the drill team on a daily basis and monitors their progress. Using 3D computer software for orebody analysis, she collects data based on the amount of gold, minerals and quartz found in each sample.

“We use RC drilling after mucking and blasting but we’re not actually doing exploration. Grade control is about obtaining more information about the ore that we want to extract, so it is very important that the drill team is careful and precise in their work.”

That, she adds, involves being certain that each sample corresponds with a given hole depth. “Without accurate samples, the entire hole is wasted.”

Having previously drilled 150 m holes in the South Wall section of the mine, the Explorac 100 will return for long hole drilling sooner than planned. Project Manager Kemi concludes: “We’ve spent 600 hours testing this rig and I think it’s a good and reliable machine. It provides a safer and more controlled environment for our operators, and it’s also easy to load onto a truck thanks to the compact size.”