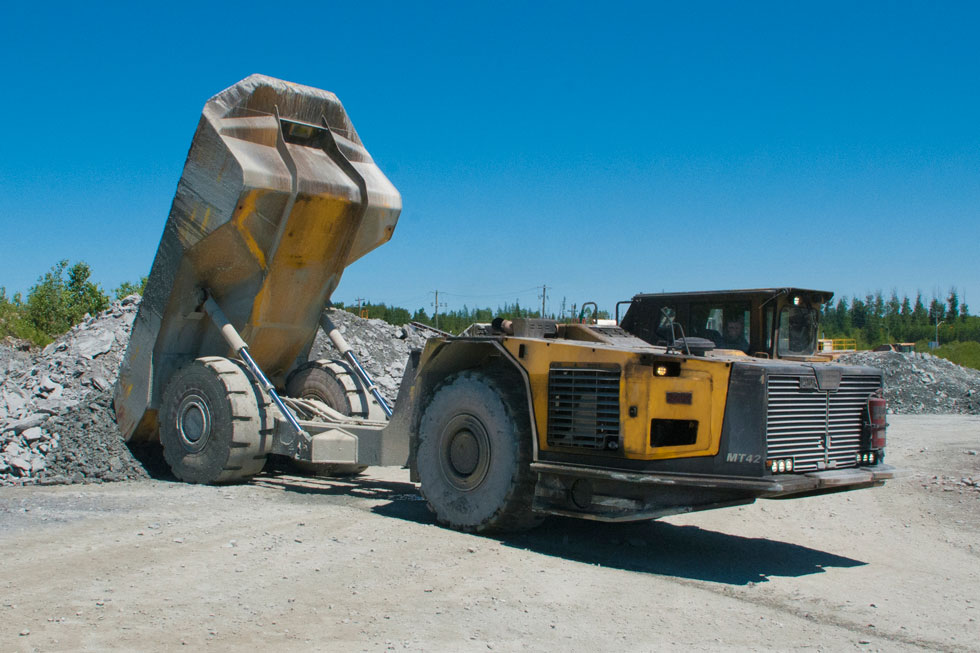 With the continuing surge in the worldwide mining industry, an increasing number of miners are finding Atlas Copco’s 42 tonne truck Minetruck MT42 to be the right choice for their haulage needs. M&C visits the Bell Creek mine in Canada to find out why.

Launched in 2009, the Minetruck MT42 has been successfully introduced by many mines around the world.

Positioned between the MT5020 and MT436B, this 42 tonner is easy to maneuver and fast on the ramp at a full load.

The truck has been particularly successful in Canada where it is well suited to many existing operations as well as the increasing number of smaller sites now being re-opened to meet world demands.

Reg Labelle, National Sales and Business Development Manager for Atlas Copco Canada, says: “Canada has a great deal of older mines whose infrastructure favors the 40-tonne mine trucks. These are now spreading throughout the provinces because they are suited to both ramped mines and shaft mines.”

Bell Creek, near Timmins, Ontario, is owned by Lake Shore Gold and was the first to get the new truck and eagerly awaited its arrival. Brian Hagan, LSG’s Executive Vice President says: “We had talked a couple years earlier that it would be nice if we could combine the size of the MT436 with the larger capacity and speed of a 50 tonner.  It was as if Atlas Copco heard us talking.”

Hagan said the company had no reservations about being first in line due to its trust in Atlas Copco’s products and service. “We have a long-standing relationship with Atlas Copco. We were aware of the MT42 from the beginning and followed it throughout development.”

LSG produces roughly 550 tonnes of gold ore per day from Bell Creek’s 480 m (1 600 ft) deep, narrow vein operation. The company is also heavily focused on advanced exploration to prove out the 1.2 million ounce resource as quickly as possible. This explains why the company wanted a faster mine truck.

Although Bell Creek could accommodate larger trucks, these vehicles would have been more difficult to maneuver than the agile Minetruck MT42 with its front axle suspension which is a unique feature for a truck of this size. The MT436 is the ideal size, Hagan says – and the company still has one in operation – but the Minetruck MT42 is rated for a payload that is 10 tonnes larger. In addition, with its 520 horse power, fuel-efficient, low-emission Cummins engines the Minetruck MT42 confidently motors up the ramp at more than twice the speed of a MT436, 8 km (5 mph) compared to 3 km/h (2 mph) for the MT436.

Other advantages of the Minetruck MT42 include greater visibility, shorter turning radius, enclosed cab, a jump seat for a passenger or trainer and an air-suspended driver’s seat that greatly improves operator comfort.

Jason Pilcz, one of the Minetruck MT42 drivers at Bell Creek, says: “The MT42 shifts don’t seem as long as they used to. There’s no bouncing around.”

The front axle suspension of the Minetruck MT42 gives a very smooth and comfortable ride. The dry, temperature-controlled environment in the cabin and its low noise level also adds to operator productivity and comfort.

At Bell Creek, three Minetruck MT42 trucks are averaging 39– 42 tonnes per trip. Working two, 10 hour shifts in a 24-hour period they have been hauling up to 1 984 tonnes of ore and waste per day.

Bell Creek Maintenance Supervisor Paul Meunier said that although the trucks are run for at least 18 hours per day, they have required no significant downtime.

Maintenance is easy and straightforward, minimizing planned downtime. Meunier noted that his logs show their availability to be higher than 90 percent.