Making Its Mark in Australia

Coal is once more on the agenda as an important source of energy, and the coal mines of eastern Australia are well
placed to meet the demand. The methods of extracting it – and the equipment needed to achieve the goals – are now
more advanced than ever.

Coal is king in eastern Australia. It feeds the coal-fired power stations of the region and it is transported daily to global markets via Newcastle on the coast, the world’s largest coal exporting port.

Much of this production comes from Coal & Allied Industries Ltd, owned by Rio Tinto Coal Australia, and its Hunter Valley Operations in New South Wales.

Located 24 km northwest of the town of Singleton, the Hunter Valley Operations (HVO) consist of multi-seam, multipit open pit mines. These include part of the Howick mine, now known as the West Pit, which started operating in 1968; the Hunter Valley No. 1 mine, where production began in 1979, and the Lemington mine, which started in 1971. In addition, the C&A portfolio includes the new Bengalla strip mine, 4 km west of Muswellbrook and the integrated Mount Thorley

Warkworth open cut mines, 15 km southwest of Singleton. The company will produce between 10.5 and 13.5 million tonnes per year and its drill rig – an Atlas Copco Pit Viper 275 – is a key factor in helping to maintain that production. 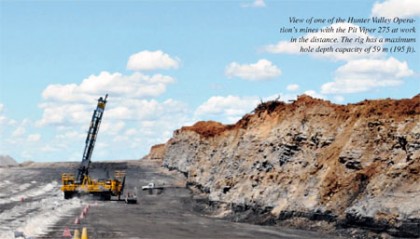