Kazakhstan gears up for growth

Kazakhstan, that vast country south of Russia and between the Caspian Sea and China, is on the move. Its infrastructure is being improved and expanded and its mining industries are being re-born with new methods and modern equipment. It will take time, but the objective is clear: to become a prime example of Central Asia’s growing prosperity.

Few countries have such expansive reserves of coal, oil, uranium, methane and natural gas as Kazakhstan. And in this land, characterized by vast open plains, Atlas Copco drill rigs have become the rigs of choice among coal producers. Beneath the surface of the Kazakh Steppe

in the north of the country, there are massive coal reserves. Here, Atlas Copco has been working with a number of mining companies to upgrade their drilling technology to meet productivity targets and lower their costs. Two such operations are Bogatyr Komirand Borly Coal that both operate a mix of Atlas Copco DML and DM45 blasthole drill rigs. Bogatyr, located in the Ekibastuz coal basin, has total reserves of 4.5 billion tonnes and produces nearly 40 percent of the country’s coal (46 Mt mined in 2008).

The mine has a fleet of five drill rigs on site, three DML and two DM45. Each DML drills around 14 000 m per month while the DM45 achieves about 20 000 m per month, both types operating on 25 m benches. The DML rigs use 228 mm tricone bits while the DM45 uses 171 mm tricone bits and all of the rigs are capable of producing more drilmetres if required.

With a 7 m burden and 5 m spacing, each blast consists of 400 holes to produce more than 100 000 tonnes of coal and 60 000 cubic metres of waste per day. Borly, located in the Karaganda region, produces about 7 Mt per year from the Molodezhniy and Kulchek mines. It uses both DML and DM45 rigs on 45 m benches, drilling around 17 000 m per month per rig, although the rigs have the capacity to operate at 20 000 to 25 000 m per month. The DML drills a 228 mm hole, while the DM45 drills 200 mm hole using Secoroc Epsilon bits lasting 15 000 to 18 000 m. Borly also has the distinction of having received the world’s first electric DML drill rig. Meanwhile, the recent delivery of the country’s first Atlas Copco RD20 drill rig for oil and gas, has paved the way for exploration of the huge Karaganda methane field.

Kazakhstan also has gold, copper, iron ore and manganese open pits. Here too, Atlas Copco drill rigs are well represented. DM45 and DML blasthole rigs are used by Kazakhmys Copper Company and Aktobe Copper Company in the country’s western copper region. The multi-pass DM30 for hole diameters of 127 mm to 171 mm, is the rig of choice for Polymetal’s Varvarinskoye Mine, whereas the single-pass Pit Viper 275, for hole diameters up to 270 mm, is used by Kazzinc’s VasGold mine.

diesel-powered hydraulic drills, as well as high-pressure Down-The-Hole hammer drilling. Today, the time-tested technology of DTH hammer drilling has proven itself at Varvarinskoye Gold as well at the Aktobe Copper Company’s “50 Years October” copper mine. This change-over to DTH drilling was not always initially successful, but with time and co-operation, the full benefit was 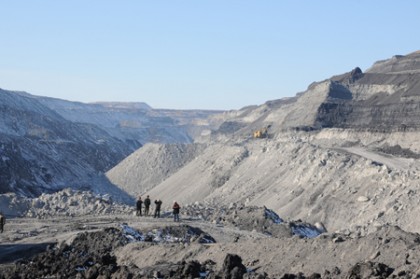