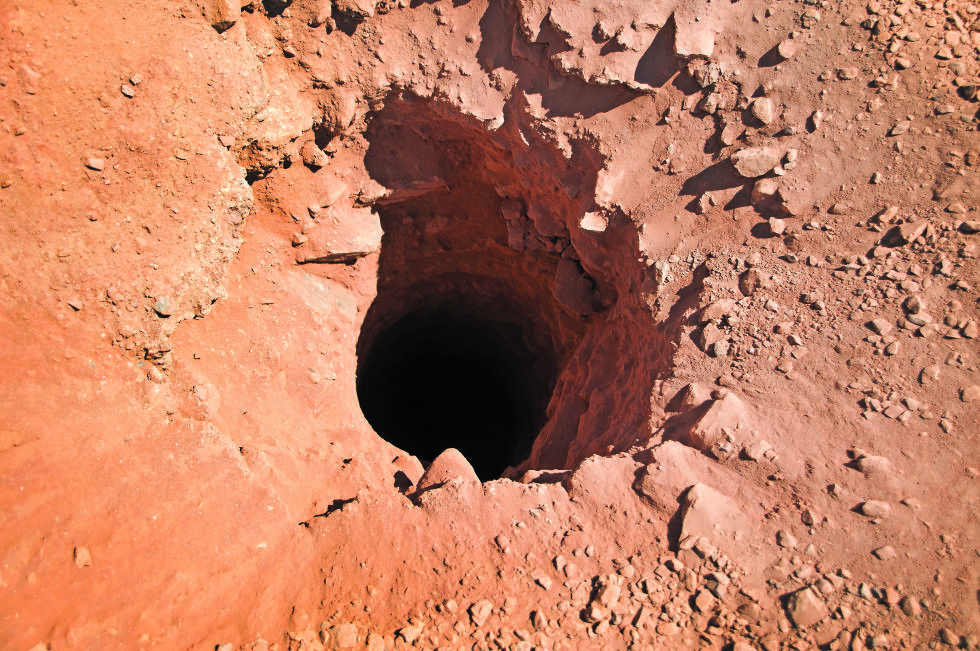 Surface Mining
The Noche Buena gold mine of Mexico has discovered how to increase the size of its large diameter blastholes without increasing the cost of hammers and bits.

The Noche Buena gold mine of Mexico has discovered how to increase the size of its large diameter blastholes without increasing the cost of hammers and bits.

For example, mines have been switching from 152–171 mm (6–6 ¾ in) holes to 215–250 mm (8 ½–9 in) holes to increase productivity. But penetration is slower making big hammers less cost effective over time. Not any more. Atlas Copco anticipated this trend toward larger holes and has created the new Secoroc COP 86 down-the-hole (DTH) hammer.

Used in conjunction with a solidshank bit, engineered to make full use of the hammer’s power, the COP 86 has proved to be 25–35 percent faster than other hammers in the 215–250 mm range, sometimes as much as 50 percent faster.

Michael White, Research and Development Manager at Atlas Copco Secoroc, says the bit’s solid shank makes it not only stronger but eliminates a foot valve failure found in most
down-the- hole bits.

Pete Vassar, DTH Product Specialist at Atlas Copco Secoroc, adds that one of the benefits of the COP 86 hammer and bit combination is that such high penetration can be achieved with a variety of Atlas Copco high pressure blasthole drill rigs – DML, DM45, DM30 and Pit Viper. It can even be used on a truck-mounted top head rig such as the Atlas Copco T4W BH.

“This means that customers get to use the rigs they already have on their benches,” he says.
Since July 2014 the COP 86 has been achieving good results at the Noche Buena (“Christmas Eve”) gold mine in Mexico, owned by Fresnillo PLC. Used together with Atlas Copco DML drill rigs, the new hammer has consistently helped to increase penetration rates by about 50 percent compared to other tooling previously favored at the mine.

With the aim to cut drillmeter costs, three hammer and bit combinations have been used with DML rigs whose air packages are rated to 41 m3/min at 24 bar. Running at these air settings would shorten the life of a most DTH setups and give lower penetration rates.

In addition, while a pattern still takes 16.5 hours to complete using the COP 86 hammers, the mine now uses just two rigs instead of four with a total run time of 8.25 hours on each.
Guillermo Bernal, Mine Operations Leader, says: “The dual benefit of increased productivity and long service life are exactly the results I have been looking for.”

The COP 86 bits are doing as well as the hammers, further strengthening Noche Buena’s confidence in the COP 86’s ability to deliver good drilling economy over the long term.
Vassar had the opportunity to witness one of Noche Buena’s practical studies in progress at the pit’s bottom.

Two DML rigs were single-pass drilling 215 mm blastholes to 8 m with 1 m of sub-drill. One rig was equipped with a hammer of another make while the other was using the COP 86 DTH hammer and bit.

“It was a direct head-to-head comparison,” said Vassar. “Our COP 86 was drilling 12 to 13 holes to the competitor’s eight in the exactly the same conditions on the same pattern.”

Vassar tracked the time it took each rig to drill the 9-m holes. The competitor’s hammer typically finished a hole in five minutes. The COP 86 drillers finished in as few as three minutes and never required more than four. By the time the COP 86 had completed its eighth hole, the non-Atlas Copco hammer was still drilling its fifth. Vassar averaged his results at the end of his visit. His calculations showed that the COP 86 hammer was 50 percent faster.

This conclusion also matched up with figures compiled by Mariel Marquez, the engineer in charge of tracking Noche Buena’s drilling operations. While the comparison study was underway, Noche Buena was not running its drill rigs 24/7. After each 300-hole pattern, the rigs were set aside. Production was limited to meeting the mine’s current monthly goal of 244 000 tonnes of ore.

“When holes are expensive to drill,” Bernal said, “it doesn’t make sense to drill more than you need to. We must be completely confident a more aggressive pace is feasible before ramping up to full capacity production.” The COP 86 bit and hammer combo has already provided clear signs that increased production will be feasible. For instance, previously all four of Noche Buena’s DML drill rigs had to run a non- Atlas Copco hammer for 16 hours to
drill a 300-hole pattern with a 5.35 m by 6.75 m burden and spacing. They drilled through competent rhyolite, slightly fractured rock.

Bernal added that when Noche Buena’s rigs have finished their production pattern they tram over to help a development contractor drill its pattern – as that contractor isn’t using the COP 86.