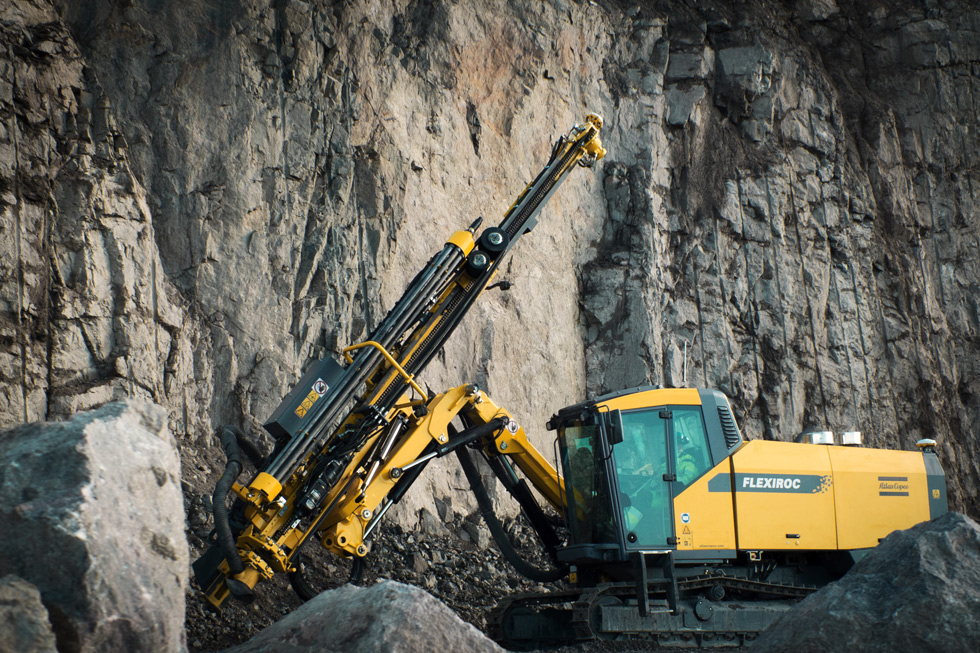 The iron ore mining giant LKAB has been putting the new FlexiROC T45 surface drill rig to the test at its open pit operation in Svappavaara, in northern Sweden. The results were as dramatic as the landscape.

Atlas Copco’s new FlexiROC T45 drill rig, introduced at this year at the Bauma fair in Germany, is considerably less “thirsty” and overall more efficient than its predecessor, the ROC F9. That’s the conclusion at the open cast Svappavaara mine in the far north of Sweden, which is owned and operated by LKAB, one of the world’s largest mining companies.

Atlas Copco Service Technician Patrik Lindqvist says: “The biggest advantage with the FlexiROC T45 is undoubtedly the fuel consumption. With its Tier 4 engine and exhaust purification system, it used 20.5 liters of diesel per hour, compared to 35 liters for the ROC F9. That’s a big reduction in operational cost as well as CO2 emissions.”

Air on demand
Lindqvist explains that the FlexiROC T45 operates on demand. “The operator tells it how much air is required for the compresso­r and that’s exactly the amount of air he gets. Previously, a full air load was always delivered which meant that a lot of diesel was being used as the rig had to be run at a higher rpm. It was the same with hydraulics. However, with the new rig, you simply get the amount of pressure you ask for. There’s no waste and you save fuel.”

More room for service
The FlexiROC T45 has a service-friendly engine compartment and the hydraulic syste­m is completely new, requiring 50% fewer hoses and 70% fewer couplings.

Big changes have also taken place in the cabin thanks to improved ergonomics. For example, there are fewer buttons and just two joysticks instead of five.

Peter Olingemar, who operated the rig during the test, says: “The FlexiROC T45 is much easier to operate. Most of all, I like the environment in the cabin and the new chair. The difference is that I feel a lot more relaxed at the end of the workday.

“In addition, the engine usually runs at about 1 200 rpm and can go down to 600 rpm when you’re tramming. So both comfort and noise levels are much improved.”

Good maneuverability
Leif Kemi, Production Manager at the Svappavaara mine, comments: “When Atlas Copco asked us if we were interested in testing a new model of drill rig we said yes right away. We knew this rig would have a lot of new solutions including joysticks, engine and so on, which would lead to improvements.

“I didn’t drive the rig myself but I was present the whole time. When we later discussed it with the operators most of them were very impressed by its maneuverability, low noise cabin environment and of course the low fuel consumption. That’s how I experienced the rig too, especially when it comes to the energy consumption. We can certainly imagine the FlexiROC as a suitable replacement for our current rigs.”