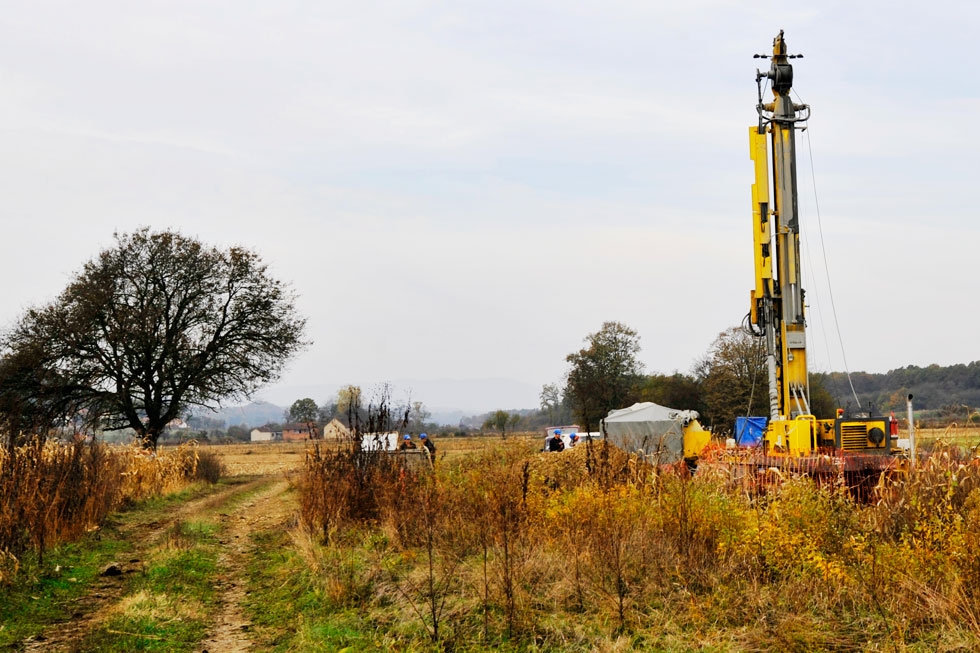 Exploration Drilling Deep in the Heart of Serbia

In a five square kilometer area of the Jadar River Valley in western Serbia, about 150 km from the capital Belgrade, exploration drillers are working round the clock, all year round, searching for deposits of jadarite, a lithium-borate mineral.

S&V Drilling Mine Services, the leading deep hole drilling company in the country, has been conducting exploration drilling in Serbia since early 2010 on behalf of an international mining group.

These Mustang rigs are drilling for deposits of Jadarite and are specifically designed for extreme conditions.

Stanimir ‘Steve’ Lazarevic, the firm’s founder and president, says: “Since we have been using the Mustang rigs we have not had a single problem.  There has been no unplanned maintenance to do, with the exception of having to change a few hoses.”

A 30-year veteran of the mining business with experience in Indonesia, Australia, Romania, and Bulgaria, Lazarevic is well-known in the industry in Serbia. He has drilled for zinc, lead, uranium, and other minerals and metals, both below and above ground. And throughout his professional career he has used many different types of drill rigs.

After returning to Serbia in 2005 to start his own contracting business he decided to use Atlas Copco equipment, starting out with the Diamec 282 diamond core drilling rig. It’s a decision he has never regretted.

The Jadar River site is located near the village of Draginac, close to the city of Loznica (pop: 50 000) in a picturesque valley in the Cer Mountains.

Each core sample is three meters long and after each one is extracted, the section of the hole from which it has been taken is photographed with a special camera inside the hole in order to match the geology to the core.  The core is then sent to a laboratory for analysis.

The drilling site is located in a historical area where, during WWI, the Serbian forces famously defeated the Austro-Hungarian Army by first retreating, then attacking – a battle that Lazarevic likes to refer to.

“It’s a great feeling to go to into battle here against the rock and win,” he says with a glint in his eye. “I love the power of this rig when it is going at full speed with the engine at 2 000 revs, and then quickly adds “but Mother Nature is more powerful than anything.”

All eggs in one basket

Contrary to some exploration drillers, S&V does not have different machines from different suppliers in its fleet.

Lazarevic  explains: “A lot of mining companies use different suppliers so as not to put all their eggs in one basket, but I disagree. I have concentrated all my service and parts to Atlas Copco so I can sit down with the engineers and tell them what I want when I order new rigs.”

Besides the first Diamec 282, which has almost served out its useful life, the company operates four Mustang rigs; the two Mustang 13-F1 rigs in the Jadar Valley plus a Mustang 13 with boosted pull-back to 18 tonnes and a Mustang 9-F1 working in another field in Crnivrh, in the eastern part of the country, exploring for gold and copper.

S&V employs some 50 drillers and in the Jadar River Valley, there are two, three-man crews operating the two rigs.

When the rigs arrived, a number of modifications were carried out, primarily involving pumps.  Due to the ground conditions, a larger flushing pump was installed and a third hydraulic pump was installed to give more power to the rotation unit and the
other flushing pumps. This resulted in an increased penetration rate of about three meters per hour.

“There’s no-one in Europe or in Serbia for that matter that drills as fast as this with such perfect core samples, and Steve’s experience with drill rigs is unparalleled,” says Vojislav Tosic, Atlas Copco’s technology and sales specialist in Belgrade.

The team achieves 72 m of core samples every 24 hours, working in two shifts and  drilling through water, gypsum, gravel, sand, clay and other materials.

Atlas Copco’s diamond impregnated bits (SC 6-8/3 7FD) are used which, due to their wide flushing channels, are well suited to the geology of the area. The bits are long lasting and begin to wear at 300–600 m.

The Mustang uses HO standard drills, 98 mm in diameter with the triple core barre­l system HO3. It takes about 20 days to extract 1 000 m of core barrels and core recovery is 95–100 percent. About 335 rods are used for each 1 000 meter hole.

When the holes are done, they are filled with concrete as a safety precaution to stabiliz­e the ground in the event of an underground mine being established in the area at a future date.

All possible environmental precautions are taken on the site. For example, pits are dug in the ground and lined with tarpaulins to collect the water that is used in the drilling process. This water is then pumped into a tank truck for proper disposal. “I remember the days when machinery of all kinds would spit out oil everywhere. That’s not happening here,” Lazarevic  says.

Sitting at the controls of the Mustang 13-F1, operator Marco Zdravkovic says: “Everythin­g in this rig is at my fingertips. The hydraulic foot clamps are also a nice touch as before they were mechanical and people could get injured.

“But here I have simple guages that tell me about pilot pressures, torque, lifting, top pressures, and rpms. And the whole thing swivels so I can put it where I need it. It’s simple. That’s what I like about it.”