The Kuznetsk Basin (Kuzbass) is well known for its huge coal resources, half of which, some 693 million tonnes, are coking coals, the main commercial fuel for smelting iron. Today, more than 100 underground coal mines and open pits are in production with 17 coal cleaning plants producing
different grades. Annual production of power station and coking coals is some 1.5 billion tonnes.

Kuznetsk Basin (Kuzbass) is well known for its huge coal resources, half of which, some 693 million tonnes, are coking coals, the main commercial fuel for smelting iron.

Drill-and-blast contractor Azot-Chernigovets Ltd. offers blasted material preparation for the open pit Chernigovsky mine
with an annual production of some 6 Mt. “In our fleet there are only foreign rotary blast-hole drill rigs,” says Vladimir Bornev, Site Supervisor. “We drill blocks with five rigs, three of which are Atlas Copco DML rotary blast hole rigs.”

The plan for 2007 was to achieve 1.1 million drillmetres and by the 11th month, the company was well on track to meeting this goal. Comparing the DML rigs, the most popular in Kuzbass, with their domestically manufactured counterparts, Bornev says that the Atlas Copco rigs are very productive and manoeuverable with the powerful diesel engine and compressor productivity among the main benefits. “Local rigs achieve a maximum of 10–11,000 drillmetres per month, while the plan for our DML is 20–22,000 drillmetres per month,” he says. “In fact, one of our drill rigs has broken all records at the mine – in August it drilled 30,500 metres.

The DML rigs are built much better, quality-wise, and the design is more sound and reliable.” Victor Yarkov, operator of the recordbreaking DML, says: “The cabin is well insulated, with good visibility and operating lights. Also, the control levers are comfortably located.” Yarkov has worked here for almost 20 years and says good teamwork also contributes to the successful drilling. 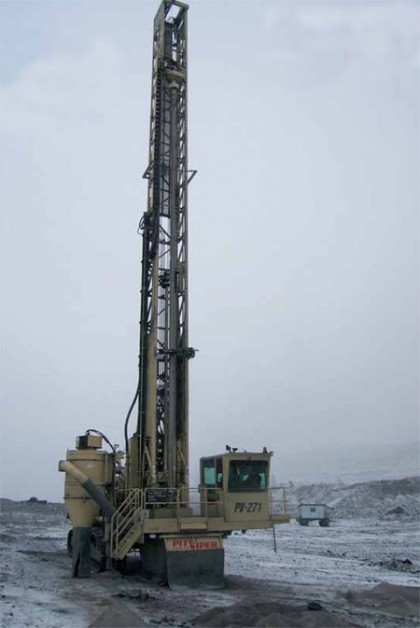