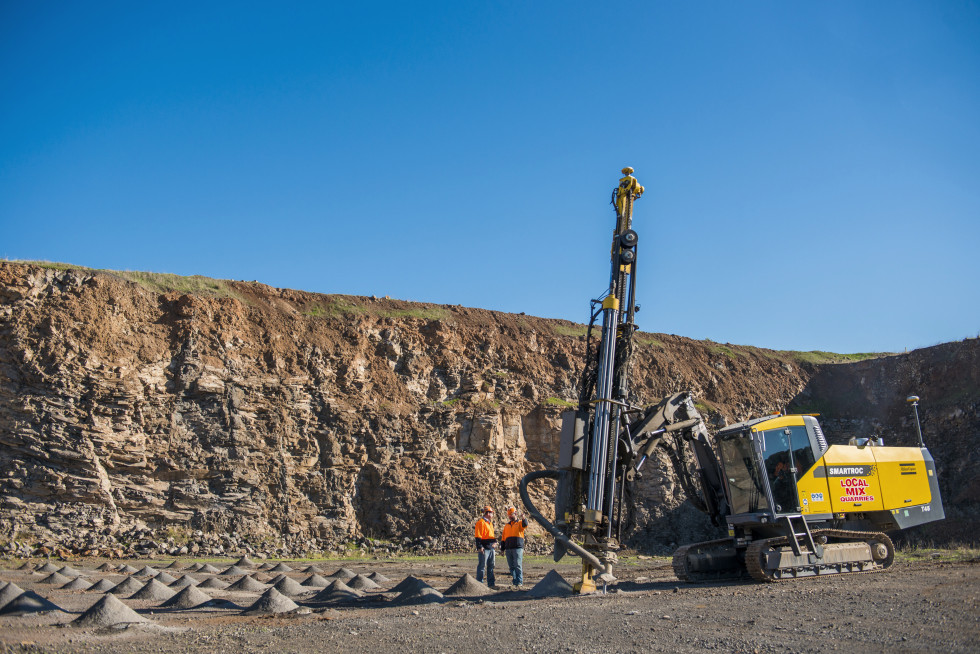 For concrete and quarry company Local Mix, increasing productivity was simply a matter
of finding the right drill rig. By all accounts, they’ve found it.

The Anakie hard rock quarry outside the city of Geelong, on the south coast of Australia, supplies 500 000 tonnes of crushed rock and road base material to the construction industry every year. Here, concrete and quarry company Local Mix, which took over the business in 1993, has been doing all of the drilling and blasting work by itself, rather than use contractors.

But when the company realized that the second-hand drill rig it had been using did not have the capacity to meet its aim to increase productivity, General Manager Steven Richardson set off to search for the best rig he could find on the market.

“We visited the Bauma show in Germany in 2013 and it was there that we first saw the Atlas Copco SmartROC T45,” he recalls. “My first impression was that it was more advanced than the others on display, so we went away, did our research and found that it outclassed its competitors in terms of technology, fuel savings, automation, precision and agility.”

On returning to Australia, Richardson and his Quarry Manager, Mat Teesdale, visited Mt Magnet in Western Australia, together with Atlas Copco representatives, to see the SmartROC T45-10 (fixed boom version) in action. They were impressed and decided that the flexible boom version would provide the versatility required for the ground conditions at their quarry. After just eight months on the site, the SmartROC T45 had increased drilling efficiencies and reduced operating costs.

Substantial fuel saving
The SmartROC T45 is consuming an average of 13.77 liters of fuel per hour, confirms Teesdale. “That’s impressive enough, but even more so when you compare it to our old rig which was running at about 15.37 liters per hour, with increases to air of 4 bar and 115 liters per second, plus an extra 9 kW for the rock drill,” he explains. “The fuel consumption we’re getting is partly due to the rock we’re drilling. It is not excessively hard, but it’s variable, which can cause wear and tear on consumables when drill force is not matched to ground requirements.”

“Another reason why we bought this rig is that it gives the operator exceptional control over the flushing air, so the machine produces only what is required. As a result, we’ve been able to greatly extend the life of the drill rods – in fact, the original rods are still on the machine and after 8 500 meters they showed little sign of wear.”

Automatic processes
The SmartROC T45 can be equipped with the hole navigation system (HNS), which makes accurate setup and collaring extremely easy. Many aspects of the operative process, such as aligning the feed and the actual drilling, are automatic, which not only gives continuous, satisfactory results but also exceptional precision. The system is loaded with the drill pattern which allows tramming to the optimal position from which to drill multiple holes at the required depth and angle. And the whole process is driven and documented by the rig’s ROC Manager program which provides detailed information for accurate decision making. Bore tracking of blasts has seen accuracy between 85-100% This rig has a 3G modem installed rather than the usual base station system to access the GPS coordinates. This provides the flexibility to move to different sites while retaining all the features of  HNS.

Moreover, it has eliminated the inefficiencies and inaccuracies associated with manual measuring and markout of holes. Hole collaring is automatic and precise, as is the alignment of the holes at angles and depths that will deliver superior blast fragmentation. Markouts are being completed in 25% of the time and blast fragmentation is unprecedented. Drillmeters per engine hour have increased 23.7% due to the improved set up time, greater flushing air capacity and rock drill penetration.

A strong return
Richardson says the savings promise “a strong return” on investment. “Our productivity has risen steeply since the SmartROC T45 arrived, he says. “We’re not just reducing the cost of rock drilling, but have reduced the overall rock excavation cost. “In addition, we’re working faster than our needs, so we’re now expanding our operations by doing contract drilling for others using this rig. This extra revenue was not factored into our purchase decision so it’s a great bonus on top of the exceptional results on our site.”

Seamless transition
Richardson also points out that the transition to the new rig has been largely smooth. “Our rig was commissioned in March this year and although it is the most advanced rig on the market our operators and maintenance team have transitioned seamlessly to it after the Atlas Copco crew spent a week on site training our team. At all times they have been responsive and available and truly committed to ensuring we get the most out of our new machine.” Richardson added that despite the rig’s high-tech design it is easier for the maintenance crews, as with fewer components there is less that can go wrong. He concludes: “The SmartROC T45 has fast proven it is a rig we can rely on to deliver consistently accurate results, day after day. The only downside, if you can call it that, is that our operator is not feeling as challenged now as the machine does everything for him!”