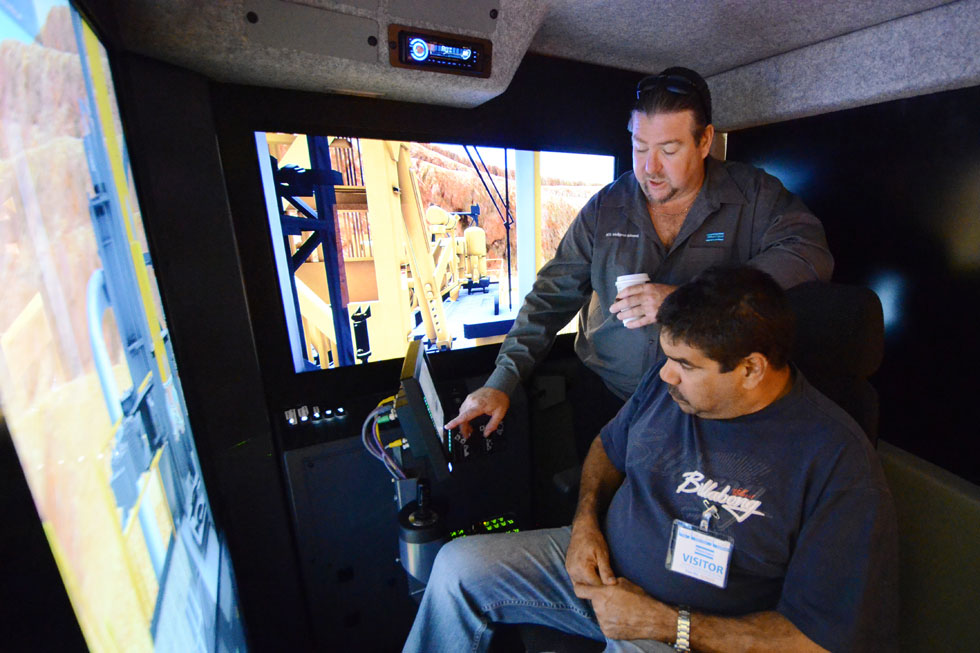 Surface Mining
Brett Randall in the “cabin” with David Jack.

More and more mining companies are turning to Atlas Copco training simulators to optimize their training programs in the face of a growing shortage of skilled labor. BHP Billiton of Western Australia is one mining company that has adopted this method successfully and is reaping the benefit. M&C was allowed in to the classroom.

While the mining industry is enjoying a period of strong growth and expansion it also faces one of its biggest future challenges – a major shortage of skilled operators.

There are many reasons for this, not least the need to hire large numbers of people for new mining projects, partly to meet the high demand for metals and minerals, but also to compensate for the loss of experienced “hands” that will soon move into retirement.

Against this background, operators need to be trained faster, better and more cost-effectively than ever before – a fact that has not escaped BHP Billiton which is among those companies now using Atlas Copco drill rig simulators together with the training program Master Driller.

BHP Billiton is going through a major equipment change at its iron ore mines, gradually moving from contractors’ equipment to its own fleet. In addition, the company plans to start up two new mines, one in 2012 and one in 2013, coupled with a far-reaching program of standardization.

There is a variety of drill rigs at the company’s six mine sites, but over the next few years the entire fleet is expected to consist of Atlas Copco Pit Viper 271 blasthole drills. In addition to the greater efficiency of these single pass rigs, the mine will achieve commonality of parts, consumables and human resources.

Even before the first Pit Viper had been shipped to the first site, Yandi Mine, training was already under way in Perth using a simulator and the Master Driller program.

In the classroom we met Dan Rolston, Drill & Blast Superintendent at the Yandi Mine, who, despite many years of drilling experience, was taking the course alongside drillers Ben Zeller, David Jack and Bill Thorpe. Rolston has even used a Pit Viper drill in the past, although not one with the Atlas Copco Rig Control System (RCS).

He said: “We all have varying levels of experience; some have no big drill experience and others have only seen the levers in big rigs. I think this is great exposure to technology and I can see how the drillers’ skills have increased.”

The trainees were a mix of ages, talents and backgrounds. One was an experienced 58-year-old who has been drilling for 28 years and purchased his first computer only three weeks earlier. One was 47 and had drilled for years with some computer experience. A third was 28 with eight years of drilling experience and many years of computer gaming.

Ben Zeller’s drilling performance typified the course for all the drillers. As he simulated the drilling of five holes, his skills level increased, completing the last two holes in half the time it took to do the first one. This section had an overall time limit of one hour. On the first attempt, he failed it by two minutes. Repeating the level, he finished it in just 32 minutes. By the second run, each operator had cut his time in half and had become proficient with the controls.

Bill Thorpe said that without the simulator training he would have figured out how to operate the rig, but that the course got him up to speed so that he will be ready to drill when the new rig arrives on site. Zeller added: “The simulator is definitely safer. You can’t damage the simulator like you can the drill itself.”

Rolston said he liked the fact that his crew will be able to drill on the first day the PV-271 arrives. “This has made them more than efficient, they will all know the same things and will be able to help each other.”

Phil Schmidt, Drill & Blast Superintendent for BHP Billiton’s Jimblebar mine, which is due to open in 2012, complimented the management team for “thinking ahead, focused on working smarter.”