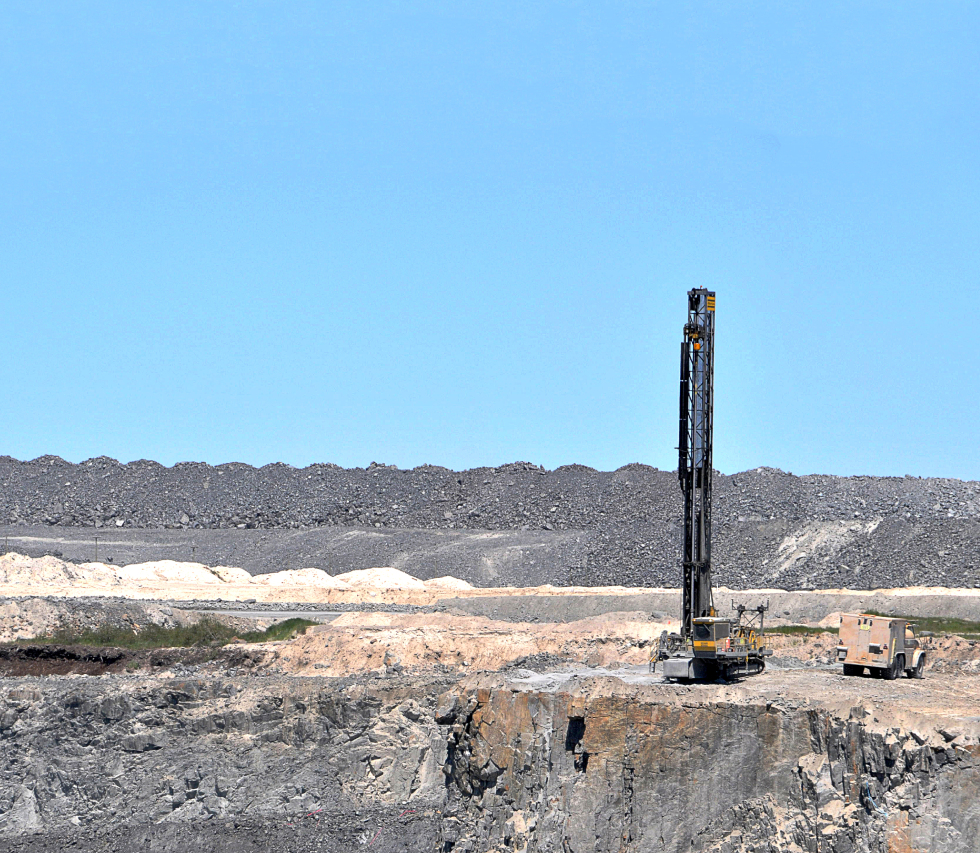 Located in the Abitibi greenstone belt of Ontario, the Detour Lake mine lies approximately 8 km west of the Ontario-Québec border and 180 km northeast of Cochrane. The property had already produced 1.8 million ounces of gold as a Placer Dome underground operation between 1983 and 1989.

Purchased by Detour Gold in 2006, Detour Lake contains a total resource of 3.4 million ounces (indicated and inferred). Over time, the company grew the resources, completed a positive feasibility study and now has proven and probable reserves of 15.5 million ounces (476.4 Mt and 1.02 g/t).

Drew Anwyll, Detour Lake mine’s Vice President, Operations, says: “Atlas Copco is our 21-year drilling partner. We chose Altas Copco rigs first of all because of their availability, but also because of Atlas Copco’s support network, which is transparent throughout Canada. We are having great success with these rigs.”

As the nine rigs were delivered over the past two years, they were put to work sideby-side to rapidly expand the current pit, which is 700 m wide by 2.5 km long and 100 m deep, to a final footprint of 1.3 km by 3.5 km at 700 m depth. The footprint will The Pit Viper 271 in the pit at Detour Lake gold mine, Ontario, Canada. Mining & Construction – 2 / 2014 21 SIDE allow Detour Lake access to a hanging wall of goldbearing quartz veins with a 200 m wide, 3 km strike length.

Two of the six Pit Viper rigs are electric models, and four are  diesel powered. All nine PV 271 and SmartROC D65 rigs were drilling 8-inch diameter holes using Atlas Copco tooling. Patterns were generally 250 to 300 holes with 6 m by 7 m burden and spacing, and each drill can complete a pattern in three to four shifts.

Craig Rintoul, Mine Manager at Detour Lake, says: “Once the footprint for the expansion is completed, the SmartROC D65 rigs will convert to presplit drilling 6.5 inch diameter holes. The PV 271 rigs will drill all drill maintenance, but Detour has also hired Atlas Copco product support specialist Derek Walsh to ensure utilization.

Rintoul says: “We’re currently getting 80 to 85 percent utilization on all drills. We have to maintain a minimum of 70 to 85 percent to meet our goals.”

Though the first of the drills to arrive at Detour Lake has only been there a little more than two and a half years, it has already logged 18 000 hours. Walsh says: “18 000 hours and no issues? It wasn’t babied, and it needed no rolling, no injectors? That’s really something.”

Walsh said preventive maintenance does not present much downtime since it can usually be scheduled for when the drills aren’t being used. The technicians pay attention to scheduling and keep parts such as hoses right in the truck, ready to go. Though the drills came up from Garland, Texas, in the U.S., Walsh says Detour Lake warehouses everything it needs right on site.

Mark McCallion, Detour Lake’s Chief Geologist, described the overburden as 3 to 5 m of peat soils over 65 to 70 m of glacial till in the expansion areas. The till is clay with free running sands. Below this are flows of basaltic deformation.

Some areas of the footprint covered by peaty overburden can be excavated by “free digging” in the warmer months, McCallion says. In late fall, as the ground freezes up, the mine will pull the shovels off those areas to wait till mid-December. Then the Pit Viper rigs will change over to rotary technique to drill in the frozen ground. Says McCallion: “We switch to rotary because it doesn’t cause liquefaction in the hole. Rotary reduces fall back.”

Otherwise, all blasthole  drilling is pneumatic percussion in volcanic formations. “The gold mineralization is generally best in greenstone,” McCallion says, “but we have visual control problems. Color isn’t a reliable indicator.

“We find our better chances are where sulfide content is higher,  for example, where the quartz becomes carbonite. But it can be where we don’t expect it. We have to exercise grade control over the whole zone. We even sample blasthole collars in what we expect to be barren zones.”

The SmartROC D65 rigs were also converted from Rock Manager electronic management to Surface Manager, matching the PV 271 Measure-While-Drilling setup. All rigs report real-time information back to Detour Lake’s Mine Operations Engineer Arthur Hannett on the same software. And Hannett programs their patterns wirelessly through a dedicated server.

Hannett says: “We’re shoveling 300 000 tonnes a day total – 60 000 tonnes of that is ore.” When M&C visited the site, the rigs were about two weeks ahead of  excavation. Hannett credits a large part of this to the Surface Manager software.

“Layout surveys are a hassle to do manually. Manpower required for survey and layout is a two to three hour job for two guys for each pattern, and we have nine drills running. They have to locate and mark information for each stake.

“Then during drilling, the driller has to either get out of the rig to read the stake and then position over it, or have a spotter. Surface Manager eliminates that. And the GPS is accurate to just a few millimeters for offsetting patterns and giving target elevations.”

Hannett said Surface Manager has increased quality control overall. “It’s not just faster—our drillers are always within spec.” Currently Detour Lake is drilling 12 m holes. Single pass drilling with the Pit Viper rigs means each PV 271 can drill about two holes an hour. The greatest variance has been less than 30 cm at the hole bottom.

“And with Surface Manager,” Hannett says, “we have accurate  documentation of explosives energy distribution for planning subsequent blasts. We can also f ine-tune drilling economy, since it transmits things to us like rock hardness, drillmeters per second and fuel consumption.”

Four of the Pit Vipers came wired for teleremote control, though Detour Lake so far has no definite plans to use it. When surface operations here in some areas of the footprint come within a few levels of historic underground drifts, it may opt to incorporate teleremote control at that time. But Anwyll says that can be decided at a later date. For right now, the mine is concentrating on establishing the mine plan footprint.