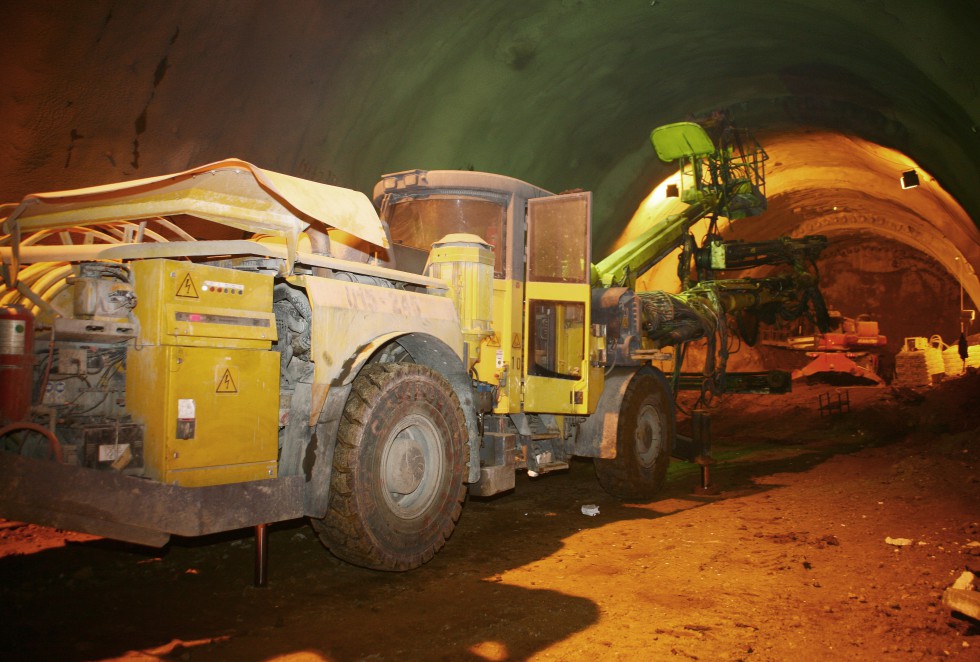 Šarani – On budget and on schedule

As one of the five tunnels currently being built on the 40.3 km section  of the Ljig-Preljina road in Serbia, the Šarani tunnel is extraordinary. This section of Corridor 11 connects Serbia’s northeastern border with Romania and its southwestern border with Montenegro on the Adriatic Sea.

In addition to the tunnels, it also involves the construction of 78 bridges. The five tun-nels are Brdjani (length 455 m), Savnica (270 m) Veliki Kik (200 m), Ljig-Golubac (25 m) and Šarani, which at approximately 900 m is the longest. “Two of the tunnels are being excavated using the cut-and-cover method while the other three, including Šarani, are classic tunnels,” says Zoran Kovacˇevc´, Energoprojekt’s Chief Engineer of Technical Operations & Construction.

Energoprojekt Niskograndna plc has been subcontracted to excavate the Šarani drive and is one of five Serbian compa-nies working in a consortium alongside AzVirt, the Azerbaijan construction com-pany, which is the main contractor for the civil works. The client is the state-owned Koridori Srbije (or Corridors of Serbia).
The project is financed by a €370 million loan from the government of Azerbaijan, of which €41 million has been allocated for the construction of the Šarani tunnel.
Šarani will be a twin-tube tunnel (883 m and 887 m). Construction began in March 2013 and is expected to be com-pleted before year-end 2015.
“We are currently on budget and on schedule and expect to remain so until the end of the project, despite the fact that advance has been difficult due to the geological conditions,” says Kovacˇevc´. Excavation of the second tube is expected to be completed by June after which they will start to prepare the tunnel for use, working on the concrete lining, road construction, electricity installations and more.
Kovacˇevc´ explains that the geology here is difficult for any form of underground work as the ground is composed of Serbian Serpentine, a changeable type of rock that becomes soft on contact with water. “In practice it turns into mud,” he says, adding that the quality of the rock is not sufficient for the drill and blast technique all the time which would have made excavation much faster.
The fluctuation within the rock forma-tion is naturally challenging. “From one area with relatively good rock where we use drill and blast, to an area with very soft rock where we have to employ other methods, it can easily change within 20, 50 or 100 meters,” says Kovacˇevc´. “We sim-ply don’t know, so we have to continuously monitor the conditions to decide on the most practical and safe method of advancing the tunnel.” For this reason, geodetic surveys and geological mapping are performed on a daily basis.

When drilling and blasting permits, Atlas Copco Boomer L2 rigs are used, while in the poorer formations, hydraulic hammers HB 2500 and HB 7000 mounted on excava-tors are used. Pipe roofing is carried out using the Atlas Copco Symetrix system, radial MAI SDA self-drilling anchors and MAI M400NT pumps are used in rock reinforcement work.
“We also use steel arches and pre-cast concrete and two layers of wire mesh,” adds Kovacˇevc´, noting that in good rock, only one layer is required or no wire mesh is used at all. “If we’re lucky, our shotcrete only needs to be about 20 cm thick but often it can be over 30 cm,” he says, adding that this is proof of the poor quality of the ground.
Šarani also employs three Atlas Copco Unigrout grouting platforms, two of which are Unigrout Flex M E22. Ventilation in the tunnels is provided by a fan fitted with 1 400 m of Atlas Copco flexible ducting.
The work is non-stop, seven days a week and with two 12-hour shifts per day. “We have about 150 workers here with most of them divided into three crews, so we can have two crews working and one resting,” explains Dušan Dovatov, Chief Engineer of Technical Operations Maintenance, at Energoprojekt.
“For example, we could be drilling and blasting for several shifts and then the qual-ity of the rock changes and we could be using the rigs for pipe roofing with the Symmetrix system. If it changes again, we could be drilling to install the Atlas Copco R32N and R32S self-drilling an chors.” Due to this unpredictability, pipe roofing has had to be used for about 70 percent of the tunnel. The method reinforces the ground ahead of a tunnel face. A steel casing is installed in an umbrella pattern around the tunnel profile, forming a pro-tective arch under which the tunnel can be advanced safely. The pattern consists of 144 mm diameter, 3 m long pipes for a wall thickness of 6.3 mm.
“Although we can’t always use the rigs for drill and blast when the rock is bad, the machines are still highly utilized and their productivity is good,” says Kovacˇevc´. “This is the first time I have encountered this type of rock and if I hadn’t seen it, I wouldn’t have believed it. It’s an interesting challenge but we are rising above it!”