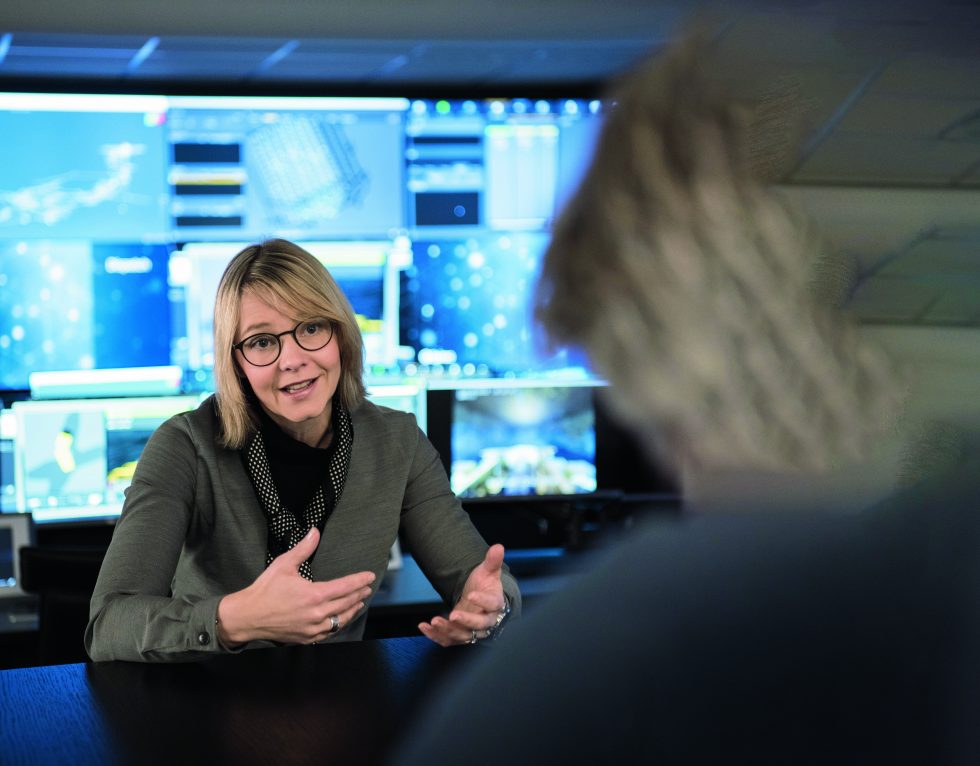 Increasing diversity and inclusion within a company is not merely making ethical statements – it is also sound business. At Epiroc’s Underground division the bar is set high: no less than a quarter of women in the workforce by the end of 2021.

Surprising it may be not, but neither the production industry nor the mining and construction industries have traditionally stood out as shining beacons of gender diversity. But that is slowly changing. Or, as in the case of Epiroc’s Underground division, hopefully blazing ahead.

As of 2019, around 15 percent of all Epiroc Underground division employees were women. In some departments, like Finance and HR, the number was higher. In other areas, much lower – for example, women blue collar employees comprised a mere 8 percent of the total. By the end of 2021, however, the goal is to have no less than 25 percent women employees in the division. For Epiroc group, the goal is to double the number of women in operational roles by 2030.

“We are working strategically to improve diversity in general and gender diversity in particular. We believe that this will have a number of positive and measurable effects on, for example, productivity, efficiency, decision-making and collaboration. Research in the area unambiguously supports these conclusions,” says Sami Niiranen, President of the Underground division, continuing: 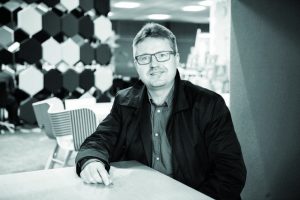 “The focus on diversity has to permeate all levels in the company and everything we do, from the management team to employer branding. Also, to appeal to a broader number of people while recruiting, we have to find ways to better visualize our operations. Diversity is increasingly on our customers’ agendas, as well. We have to make sure our solutions are designed to be gender neutral.”

Carin Bergendorff, Vice President of Operations for the Underground division, is perfectly onboard with the goal and is one of the driving forces behind improving diversity:

“The challenges differ across our sites globally, but we are working to improve diversity and inclusion everywhere. This will lead to better decisions and higher productivity. We’ve had the goal of 25 percent women for a number of years now, but there’s been no real improvement over time. We have to start thinking differently.” 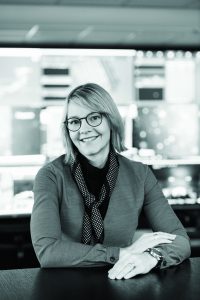 According to Carin Bergendorff, there are a number of strategies in motion. Looking over the employer branding of the company to appeal to more women is one way, as is finding female role models to inspire both present and prospective employees. There is an active Diversity Network in place, where people like Helena Hedblom (recently appointed president and CEO of Epiroc) has talked about careers, successes and challenges. The FemTech network and the Female Mentorship Program are other channels through which Epiroc can inspire and educate, as well as come into contact with prospective employees.

“Recruitment is a key component of success. Of course, recruitment by competence will always be paramount. But we have to pinpoint and perhaps redefine what the desirable competencies actually are,” says Carin Bergendorff.

The qualities considered desirable in the Epiroc of today and the near future include adaptability and agility, open mindset, sustainable thinking and familiarity with working in a digital environment. Recruitment efforts – and ads – should reflect that.

“We have to be open to, and value, other viewpoints and perspectives than the traditional ones in this business. It’s important that we challenge ourselves to think outside the box.”

Carin Bergendorff is the first to concede that she needs to be challenged herself from time to time. She appreciates being called out and being forced to reflect on her decisions and way of thinking.

“Let me give you one example: we’ve challenged ourselves to always produce at least one female final candidate for every position we recruit for. If we haven’t found one which, I admit, I too have sometimes failed to do, we have to go the extra mile and look again outside our regular recruiting grounds. Our ultimate goal is to not even have to think about these issues and have it all come naturally,” says Carin Bergendorff.

The main responsibility for implementing the strategy at the Underground division’s Product Company in Örebro, Sweden, falls on Åsa Gabrielsson. She has had a long career working in several global industrial companies and was recently appointed General Manager of the Örebro site.

“There is an increasing number of strong women in leading positions at customer centers globally, as general managers, in operations or in R&D. I think that’s really cool,” says Åsa Gabrielsson.

She has a clear understanding of how to make Epiroc a more attractive employer.

“We have to do away with a lot of preconceived notions about what working at Epiroc entails, and show that we have interesting products, business models and career opportunities. We have to catch the interest of young women early by working actively with schools. And, naturally, we have to make sure that we don’t discriminate against for example gender or cultural background,” says Åsa Gabrielsson.

There are also some strategies to employ in everyday operations, to ensure that all voices are heard and that everyone feels included.

“We have to work on changing some internal cultures and breaking up homogenous structures. It will take time and effort, but we’re prepared for that. The results will be beneficial for all, and will provide us with new perspectives. My experience is that women coming into our kind of company are extremely goal and team-oriented,” says Åsa Gabrielsson.

On the shop-floor of the Örebro production facility, Jonas Lindqvist is assembling a Scooptram ST18 loader. A critical step in the production processis securing a beam with two plugs. Until recently, he had to stand on a stepladder and, from an awkward position, use a 10-kilogram sledgehammer to literally pound the plugs into place. These days, there is a highly specialized tool for the job that allows him to simply turn a wheel to set a plug properly. 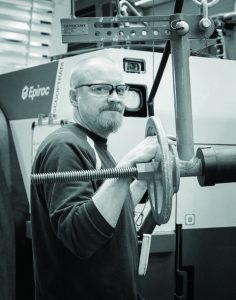 “I used to dread this task. You couldn’t strike the plug more than a few times before tiring
and having to hand the work over to a colleague. Sometimes you could only push it in a millimeter per stroke, depending on the initial alignment of the plug,” says Jonas Lindqvist. “Nowadays it’s an easy job, and we get more accurate results, as well. It takes no strength at all to spin the wheel, so anyone can do it.”

A short distance from the Scooptram loader, in an office with a view of the floor, Kajsa Geiron manages a Production Purchasing team of ten people as well as acting as Supply Chain Manager. She began her career at Epiroc in assembly at a time when few women here had blue collar jobs.

“When I started out, there were some physically demanding tasks that I definitely couldn’t do. Today that has changed completely, with better tools and more focus on ergonomics and safety. Nowadays everyone can do everything,” says Kajsa Geiron.

She started down the leadership track eight years ago, with a position as a line manager for a nearly all-male team of 40 people. “It’s not that long ago, but it was a different time, and a lot has happened since then. Not that I ever felt any disrespect for being a woman, but the jargon and jokes have definitely improved over time. I think having a good mix in a team is important. You need balance between differing perspectives. But I believe we’re pushing strongly ahead in diversity, as well as R&D and sustainability.” 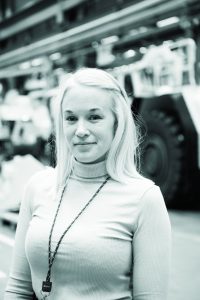 When recruiting for her purchasing team, personal qualities weigh heavily. “We talk to suppliers all day, so they have to be people persons with positive attitudes and respect for other human beings. They have to smoothly fit into the existing group dynamics. I look out for a good match, plain and simple – regardless of gender,” says Kajsa Geiron.

Not surprisingly, HR plays a major part in the company drive for improved diversity.

“There’s a huge focus on diversity at Epiroc these days. The main focus is on gender, but
there’s also age, experience, personality and culture to consider, for example. The payoff is a safe and healthy work environment for all people,” says Annelie Mård, Vice President of HR, Underground division. 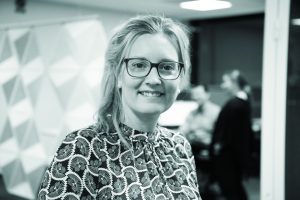 The gender diversity goal of 25 percent women was not chosen at random. According to research, around that figure is the diversity “critical mass” – the point at which the positive business effects really take off.

“We need to reach that level to reap the benefits in productivity and decision-making. Including differences will make us stronger as a group and will lead to better solutions for our customers,” says Annelie Mård.