An Atlas Copco HB 10000 ProCare hydraulic breaker is presently involved in the development of the railway line from Sandvika via Oslo City to the Gardemoen airport.

The double-track trunk line could no longer handle the increasing traffic volume to and from the new airport. The expansion to four tracks required some 71,000 m3 of rock to be removed over a distance of 900 meters. Due to the extremely high costs involved in environmental and safety aspects and because of nearby residential buildings, blasting was out of the question.

Hegna Maskin from Notodden first used an Atlas Copco HB 7000, a 7-ton class hydraulic breaker. The breaker is working from 7 a.m. til 6 p.m. and is removing some 1,300 m3 of rock each week. A tough and distantly jointed rock turns this into a very challenging job. The entire project is scheduled to take 11 months and the contractors were looking for ways to increase the rock breaking capacity.

An HB 10000 ProCare, the world’s biggest hydraulic breaker, has now been called to the scene. With some 2,000 m3 per week this hydraulic breaker accomplishes approx. 50 % more than his „little brother“.

“The HB 10000 ProCare clearly performs better than the HB 7000, which in itself is already a Hercules“, the proprietor of the contracting firm and excavator operator Jon Erik Hegna explains. “With this breaker we are sure to be able to meet the tight schedule.”

“Another valuable asset is the Atlas Copco ProCare service contract,” Hegna adds. “We now have a clear idea of the operating cost of our equipment and profit from the know-how of the Atlas Copco people who are planning and carrying out the service and maintenance.” For Tom Erik Larsen, Business Line Manager of Atlas Copco Norway, too, the contract offers a lot of advantages: “We are working proactively and the service contract gives us the opportunity to plan the hydraulic breaker service in the most favourable manner. Because in the end it is in our own interest to secure maximum productivity to our customers.”

Oslo’s urban traffic system will be the subject of a marked expansion in the years to come. It is not only for environmental reasons that the municipal authorities want commuters to take the train – the capacity of the few highways leading to and from Oslo has already been exhausted a long time ago. More than 30 km of stop-and-go during rush hours is long since regarded as common. Quadrupling the railway line will allow smaller intervals between trains and will distinctly ease the strain on road traffic. 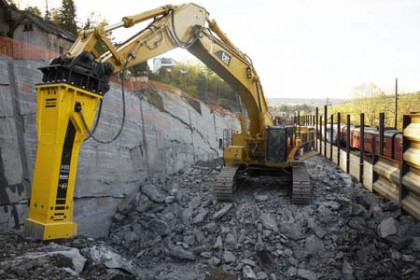