Clearing the way for a luxury hotel

Based on Atlas Copco and Brokk technology one of the most demanding reconstruction projects in Stockholm’s history will be completed in time – and flawless accuracy.

Two famous mills of the Saltsjoqvarn area, the Red Mill (1889) and the Semolina Mill (1920) are converted into luxury apartments and a prestigious hotel. This project however demands maximum care during planning and construction – for the building shells have to remain unaltered, due to their historical value.

Starting in June 2007, the Rivners AB company accepted the challenge to gut the mills completely – and carefully. One of the most delicate tasks had been the demolishing of the giant cereal’s silos of a 25 x 15 x 30 meter dimension.

Another demanding procedure: the demolishing of the roof. Section by section the roof’s parts were lifted down by a crane with a lifting capacity of 14 metric tons. Once the roof had been carried away, the floors were next to be battered down.

Hugh beams were hewn away while supporting concrete beams had to be lifted down from about 20 metres. Again, joined precision equipment turned out to be the key to project completion, with regard to the rigid safety regulations that were given: the Brokk 90, equipped with an Atlas Copco SB 150 hydraulic breaker. Thanks to its slim body and notable low weight (transportable with a common construction elevator), it appeared unproblematic for the operator to pilot the Brokk 90 securely through all the narrow limited spaces inside of the mill.

The new luxury hotel will celebrate its grand opening in September 2009. 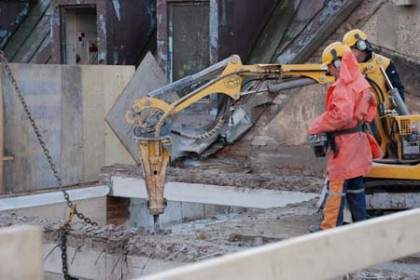