As bid winner of the second and biggest refurbishment lot of Mineirão Stadium, in Belo Horizonte, in the Brazilian state of Minas Gerais, Detronic has the challenging mission of demolishing the entire bleachers area, where seats will be installed in accordance with the standards set out by FIFA. To handle the deadline and the great amount of interventions, the company has adopted several models of Atlas Copco hydraulic breakers.

According to Ayres de Azevedo Barreto, Detronic’s executive officer, the company’s lot of civil works included the lowering of the field by 3.9 meters, an earthmoving work which demanded the removal of 70 thousand m³ of earth and the demolition of electronic scoreboards and indoor stadium rooms.

To handle the scope of works, Barreto explains that the company developed an engineering demolition plan, the first stage of which was the opening of accesses to allow entry of large equipment.

“We have used the 140 kg-hydraulic breakers SB 152, mounted on 8-ton mini-excavators,” informed the executive. “Only small equipment like those could move in the limited area we had in this first stage of the construction,” he concludes.

The engineering plan devised by the company showed results: at first, both the demolition of Mineirão Stadium and the lowering of the field should be completed in 150 days, according to the deadline defined in the construction bid notice. “The high productivity of the equipment involved allowed us to complete the works in less than 120 days“, highlighted Detronic’s executive.

According to Barreto, the selection of hydraulic breakers considered their versatility, since they can be mounted on machines of many sizes, including a 20-ton long-front excavator used to demolish sites of difficult access. 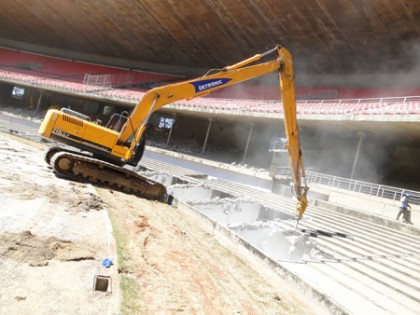