Arto Mattila became interested in drilling contracting some 20 years ago, when he bought equipment to drill rock on his own land. His hobby evolved into a job, and now his work is also his hobby.

This shows how much Arto enjoys working on site. In the flatlands of Ostrobothnia (Finland), the small family firm is known for its flexibility, absolute adherence to time schedules and the high quality of its work. The company is now using Atlas Copco’s new generation FlexiROC T30 R Construction Edition. By November 2016, the new machine had notched up 250 hours of drilling.

Mattila has three different drilling units and two excavators. In addition to the Atlas Copco tophammer rig, he has a tractor-based unit as well as an excavator-mounted ExcaDrill drill unit. The man himself shuttles from one drilling team to another as required, while the next generation handles groundwork contracting activities. Mattila’s drilling equipment is also a familiar sight on the Ostrobothnia railway tracks. Exact timing is of the essence for the windows of time allowed by the Finnish railway company VR. Drilling and blasting are strictly tied to the service intervals in train timetables. The track must be clear when the next train goes past the work site.
In the middle of November last year, one of the company’s drilling sites was at Kauhava. Most job sites are found within a 100-150 km radius of Kauhava. More than 1,000 cubic meters of rock was blasted to build a roadbed. The road construction project was the responsibility of a company called Juhan Paja, which specializes in infrastructure projects.

“This site represents a normal job for us. We work for several different clients and at several different drilling sites a year. The sizes of the jobs vary, as do drilling depths. Here, the depth of the hole was two meters at the highest point. The maximum hole depth is 14 meters.” said Arto Mattila.

The new Atlas Copco FlexiROC T30 R Construction Edition was operated by Ari-Pekka Pahkajärvi. Mattila charged the holes drilled by Pahkajärvi.
The new Atlas Copco is the second one owned by Mattila. The first one, a previous generation machine, was in use for six years. Mattila’s experience of the rig was so encouraging that sticking with the same make was a given.
“I didn’t really have any problems at all with the old model in all that time”, said Mattila.
Because one of the company’s selling points is that job sites are for doing work, not repairing machinery, the company likes to keep its equipment fairly up-to-date.
“The new drill rig has a lot of nice updates and automated systems. The hammer is also very powerful and the transmission, too, is stronger than before. The undercarriage is well balanced, i.e. it has a low center of gravity and wide crawler track support width (2,410 mm), which improves driving in terrain. The new radio remote control can now be used to program and regulate a diverse range of drill event values,” said Mattila, as he listed the features of his new purchase. The FlexiROC T30 R Construction Edition in a trenching application

According to Pahkajärvi, the automatic depth setting is a particularly welcome feature. The remote control has been used to set e.g. drill depth, inclination and angle in advance. Drilling is performed completely automatically based on the set values. Pressure and RPM data are also controlled via the remote control.
In November 2016, Mattila reported that his company’s work situation was good. The company had jobs booked for most of the winter.

According to Atlas Copco’s district manager Kari Erkko, Mattila’s FlexiROC T30 R Construction Edition is extremely efficient in its class, since the power outputs of the diesel engine and transmission system have been improved in the new model. The machine is best suited for urban drilling because of its compact size and extensive reach.
The rig has two boom options. Mattila uses the longer version, which has a reach of 5.2 meters. The drill coverage area is formed by the boom being able to turn 40 degrees to the right and 35 degrees to the left. The drill rig’s generous inclination angles assist in drill events on even the steepest slopes. The drill coverage area from one set-up is around 15 square meters.
The drill on the rig is also a new model, and the one on Mattila’s rig is the COP 1640+. The hole diameter is 45-89 mm. The control system is COP Logic. It automatically adjusts impact and drill feed pressure to ensure optimal performance, which increases the service life of drill rods and bits, according to the manufacturer. By using the control system it is also possible to drill straighter holes than ever, minimizing the risk of jamming.
“The efficient compressor and dust collection system also facilitate drilling in urban conditions. The machine has a 3+1 rod feeding system and a fixed, aluminum cylinder feed. Feeding of the drill rod is done automatically and the entire drill unit is protected with a netting structure,” said Erkko.
Mattila’s rig has a hydraulic winch, which allows secure anchoring of the machine even on steep slopes. The drill coverage area is quite wide, since the reach is 5,300 mm.
According to Erkko, service intervals have also been extended.
The diesel engine is made by Cummins and it has output power for drilling of 116 kW (155 hp). The engine is a four-cylinder Stage IV engine, in which exhaust gases are treated using DOC/SCR technology without particulate filters. Engine speed is also controlled automatically in the drill event. Atlas Copco’s screw compressor (80 l/s – 8.5 bar) guarantees efficient flushing of drill holes.
The Atlas Copco FlexiROC T30 R Construction Edition weighs around 10 tonnes. The machine has a maximum transport height of 2,900 mm and length of 9,200 mm. The track gauge is 2,800 mm and the length of the main body from the front of the track to the back is 4,200 mm. This tophammer rig, which is equipped with the latest technology, is therefore easy to transport from one site to another. 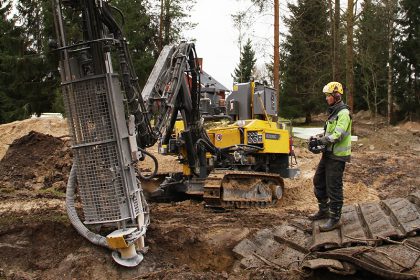