Austrian tunnellers are having to cope with difficult ground conditions in driving the second parallel tube of the Tauern road tunnel. The Atlas Copco drill rigs Rocket Boomer L2 C and E2 are proving that flexibility is a major benefit in rock reinforcement.

Construction of the second tube in Austria’s 6,545 metre-long Tauern Tunnel, on the A10 motorway from Salzburg to Villach, is now well underway. The contractor, Porr Tunnelbau GmbH, is driving the new tunnel west of the existing tube, at a spacing of some 30 metres. At the north end, the tunnel passes through sand and gravel, probably caused by a combination of weathering and landslides from the area’s steep slopes. At the southern end, the geology consists of a type of ‘schiefer’ similar to phyllite.

When M&C visited the site in early February this year, some 400 metres had been driven from the north portal. An excavator is used for the removal of the loose material and the drillers are using a two-boom Atlas Copco Rocket Boomer L2 C in reinforcement work. A combination of support methods are used to stabilize the 11 m-wide underground opening. 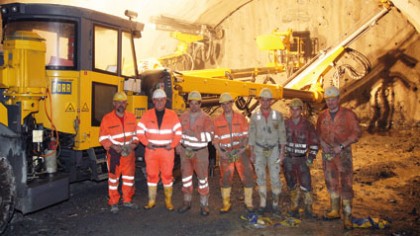