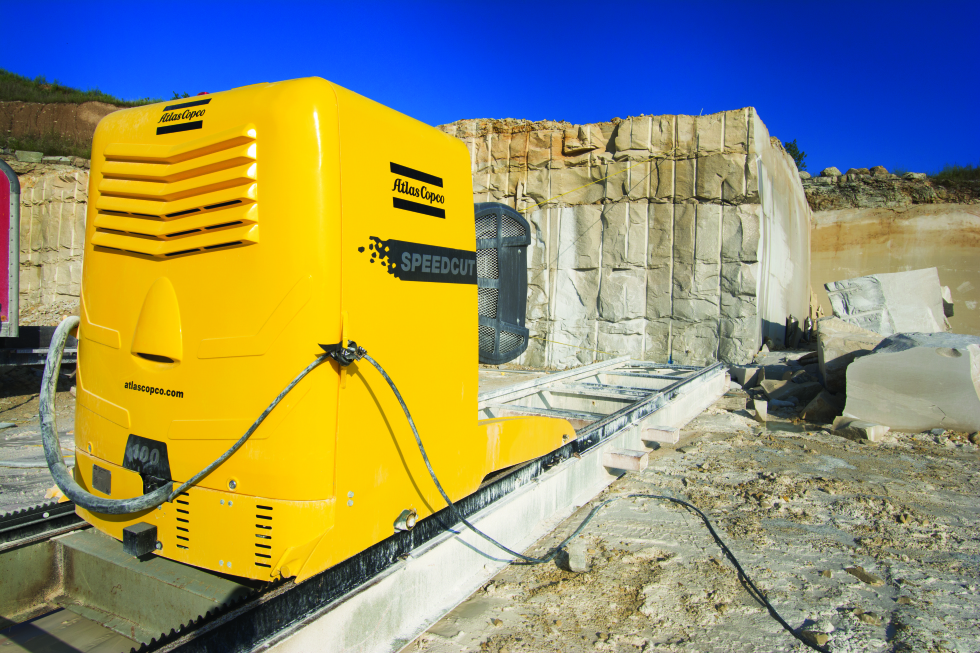 Dimension stone
A dimension stone specialist in the USA has increased its productivity by up to 40 percent when selecting the Atlas Copco Speedcut.

SpeedCut boosts productivity for dimension stone specialist in US

A dimension stone specialist in the USA has increased its productivity by up to 40 percent after switching the drill and blast method for diamond wire cutting to the Atlas Copco SpeedCut.

Valders Stone & Marble Inc. of Wisconsin, recently decided to switch its production method from drill and blast to diamond wire cutting. The result is a 40% increase in productivity and lower costs for dimension stone specialist. The quarry, located in the small community of Valders, now uses a SpeedCut diamond wire cutting machine, in combination with a SpeedROC D30 down-the-hole drill rig to drill the 89 mm holes for the diamond wire, both supplied by Atlas Copco.

John Schnell, the company’s Vice President, Operations, says: “We were shooting 800 feet (244 m) in 450-hole shots. Explosives, drilling and labor for a shot like that is tens of thousands of dollars. Labor is still about the same, but we save on explosives now which accounted for a third to two-thirds of the cost for each shot.”

In addition to savings on explosives, the quarry has reduced waste by up to 50%. Schnell explains: “We have some of the most desirable limestone in the country, but we also have a lot of seams. Sawing optimizes what we have by preventing excessive fracturing.” The smooth cut of the faces also means that there is less stone for the finishing crews to trim.

Operator Chad Marchant says: “Overall, the work is a lot easier on us than before, and of course the saw doesn’t make any dust at all since we’re running water on the line in the stone.”

To begin a cut, a 20 m long horizontal hole is drilled at the base. This hole is then intercepted from above with a vertical hole drilled roughly 6 m deep. The diamond wire is then fed through these holes, separating the back of the block from the rock formation.

At the beginning of the cut, 50 m of wire is threaded through the saw’s flywheels and connected to form a loop. Slabs 2.5 m wide are then sliced off the block, with each slab requiring a horizontal hole drilled at the base.

As the saw cuts, Merchant maintains the tension using a remote control to back the machine up on its tracks. When the saw reaches the end of the track, the operator takes a 10 m length of wire out of the loop.

Valders limestone is in demand for use in buildings and monuments worldwide due to its high weathering characteristics. The compressive strength is typically around 240 MPa
(35 000 psi), up to 10 times stronger than concrete.

The primary market for Valders’ stone is the Midwest of the USA. The quarry has also received orders for architectural projects in Japan and Paraguay.