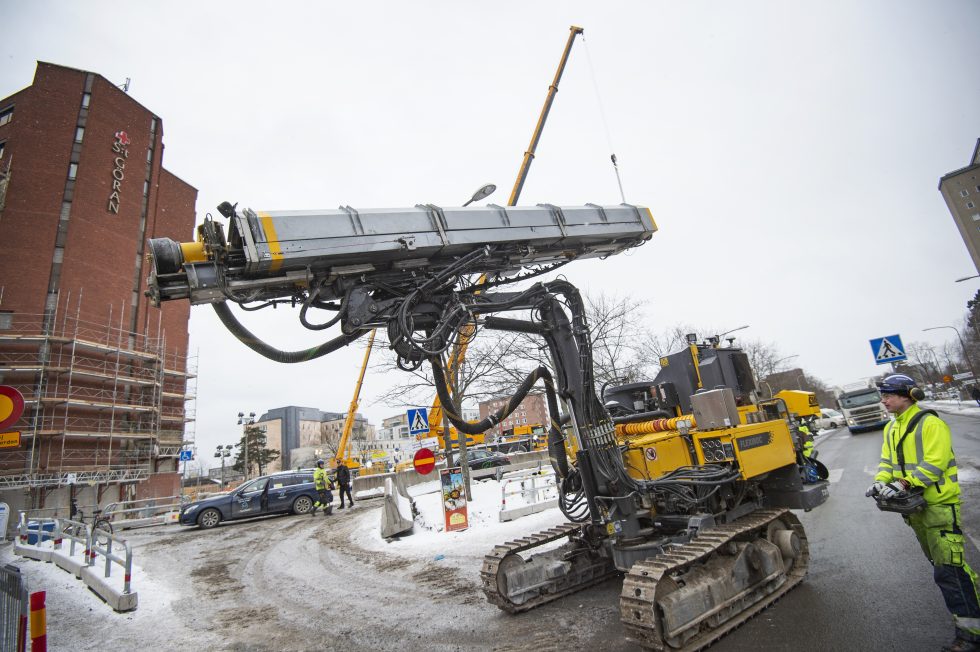 At St. Göran’s Hospital in Stockholm, a project requiring extensive blasting work is in progress. Moving rock close to a hospital filled with sensitive equipment, patients and staff, requires careful planning – and a drill rig with reduced noise level.

Between the start of Skanska’s rock drilling work early in February 2017 and the middle of March 2018, around 100 rounds were fired. Before the blasting was complete in spring 2018, around 200 blasts were carried out. This corresponds to around 10,000 m3 rock mass.
In this strictly controlled building project, there were fixed times for blasting. For each blasting, there were at least ten guards stationed for extra safety. Around 30 vibration meters were positioned around the hospital to monitor the blasting.

The blasting work was required for the construction of new culverts, foundations for two new hospital buildings, and a new ambulance entrance. The renovation work also included existing hospital buildings, such as the rebuilt administrative offices, a new radiography department, new operating theatres, and BB room and maternity unit. 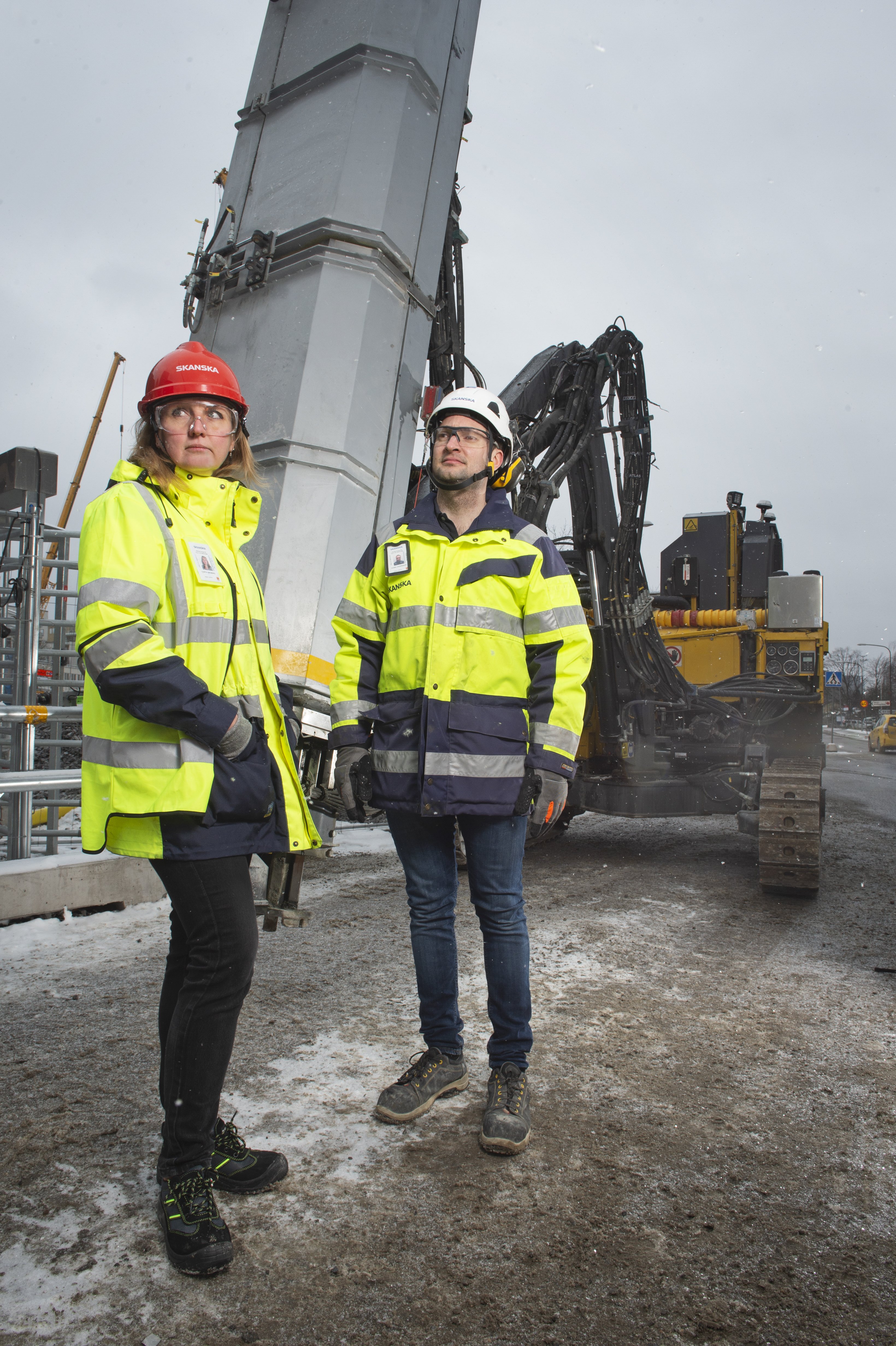 “If we hadn’t had a muffled drill rig, we couldn’t have carried out the work. That was a condition imposed by Locum and the hospital from the start. Before the project started, we bought an Epiroc FlexiROC T30 R – a medium-size drill rig specifically for this project and suitable for work in tight urban environments.” Carita Broberg – Project Manager, Rock, at Skanska Roads & Construction

During the building process, activities in the hospital continued largely as usual. The greatest challenge of the project was the sensitive environment. Great consideration was required for patients, staff and sensitive equipment. The technical equipment includes magnetic radiography machines, the hospital’s switchgear systems, computer tomography systems etc.

To achieve the high requirements, extensive planning and risk analysis were required. Because of the sensitive environment and lack of space, excavation of the rock was sometimes carried out with steel cutters or splitters (cracking). These are sometimes the only alternatives for minimizing vibrations.

“The planning was focused on how we could carry out the work safely with great care for the environment and minimum disruption,” said Robin Andersson, who is Skanska’s blasting manager for St. Göran’s Hospital. 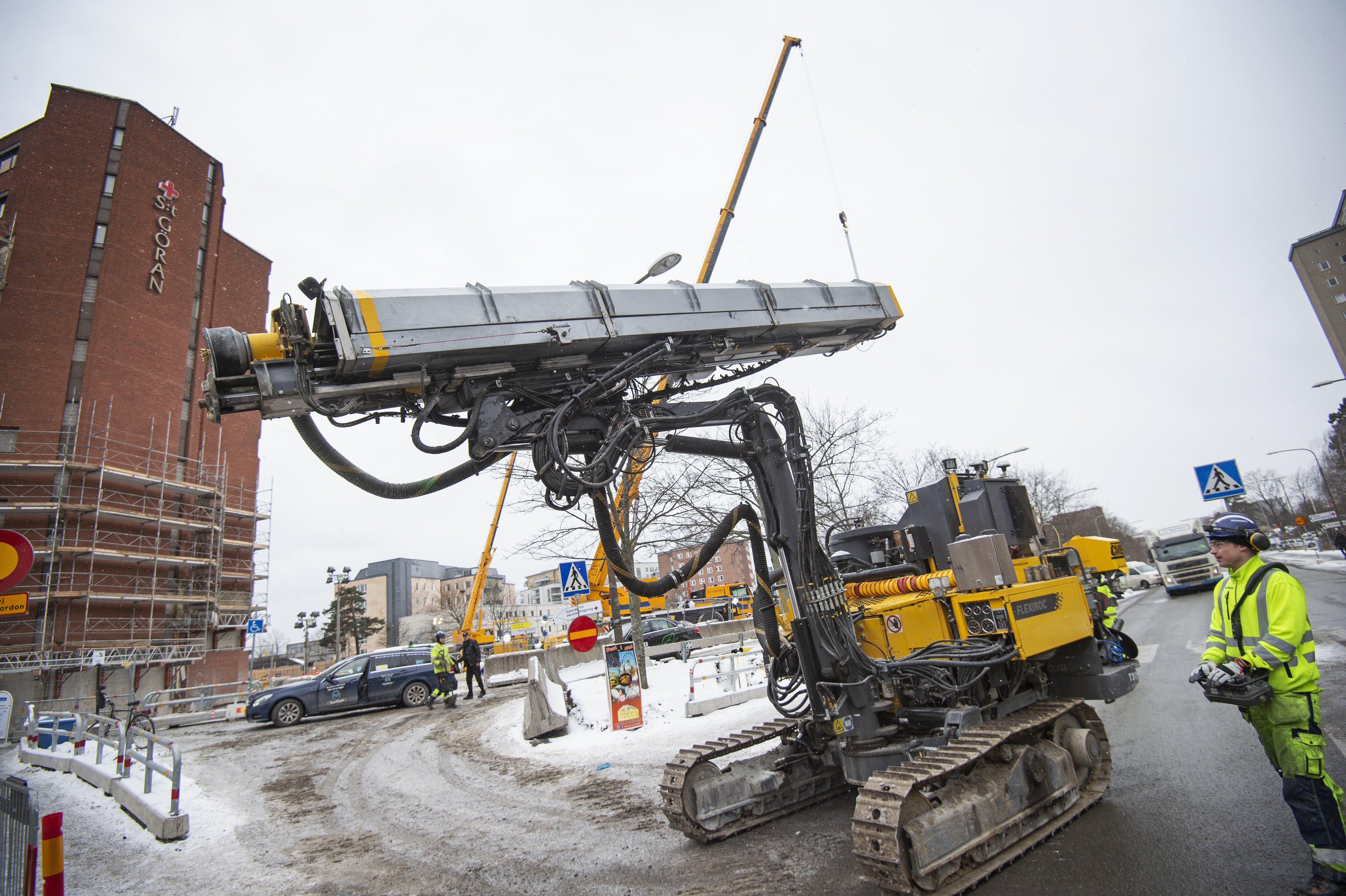 “They didn’t know we had already drilled”

As well as the detailed planning, the muffled drill rig played a very important role in fulfilling the high requirements. A positive effect of the reduced noise level of the drill rig was noticed as soon as drilling had begun. 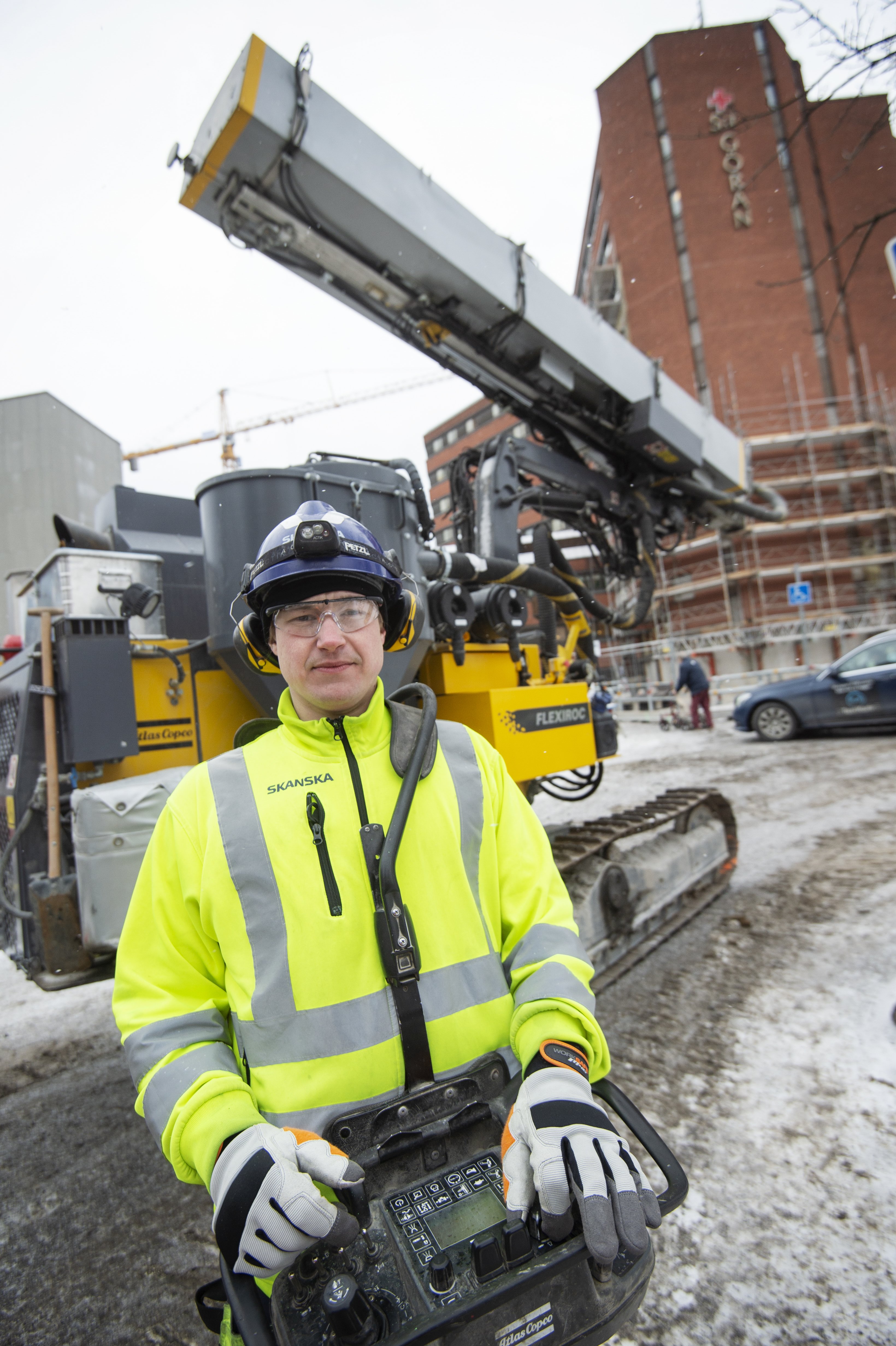 “The drill rig was so quiet that the people working in the hospital didn’t know that we’d already started drilling.”

Rig operator Gustav Andersson sees a range of other benefits from using a muffled drill rig, most of which concern the environment.

“The most positive effect is for your health, above all from the reduced noise level. I can talk to my colleagues while the machine is drilling”, said Gustav Andersson. He also thinks that the attached noise reduction kit gives a cleaner working environment with less oil waste and less effect from cuttings.

There are many advantages, but Carita Broberg also sees certain challenges for the operator. “It can be difficult to drill close to a wall or piling because the muffler takes up space. It can also be difficult to see what’s happening at the drill base, since the drill operator can’t see the collaring site properly.”

Carita Broberg points out that a muffled rill rig brings great advantages in a project such as this, which would otherwise not have been possible. If Skanska had more muffled drill rigs, more jobs for them would be found. “There’s a lot of talk about investing in a new rig in the future”, she said.

Facts about the project

St. Göran’s Hospital has been extended and modernised to meet the healthcare needs of Stockholm’s growing population. Locum AB, property administrator for Stockholm’s Regional Council, has concluded a collaboration agreement with Skanska for the construction of two new treatment buildings and the renovation of existing buildings.