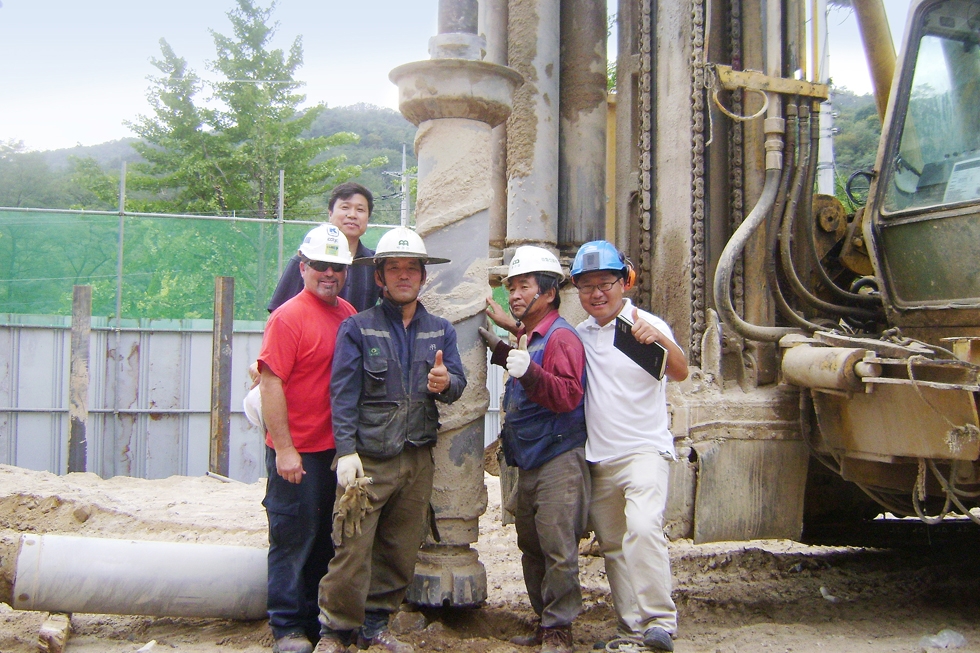 Products & Progress
The MihWa drilling team give it the thumbs up.

At the Kukmin University of Seoul, South Korea, drillers installing foundations for new
buildings have been putting the pioneering Secoroc QL 120 DTH hammer to the test.

When the Quantum Leap product line from Atlas Copco Secoroc was launched it became the drilling industry’s first hybrid of valve and valveless air cycle DTH drills. And new evidence has emerged proving its competitive edge.

At the prominent Kukmin University in Seoul, the South Korean capital, drillers performed a series of tests using the Secoroc QL 120 hammer. The tests were undertaken by local contractor MihWa, comparing its existing equipment while drilling a series of foundation holes for new educational premises.

On the first day of testing, the existing hammer of a local brand, was used with a 380 mm drill bit to install a 7 m length, 260 mm diameter pipe. The pipe was drilled in 47 minutes and readings taken with an Atlas Copco compressor showed a hammer presssure of 16 bar.

“If the hammer pressure gets below 15 bar it has to be replaced,” says operator Mr Jung. The test was supervised by MihWa employees and, from Atlas Copco, Myung Hyun Ko, sales engineering and Yong Oh Choi, Business Line Manager. After the first hole they instructed the operator to switch to the Secoroc QL 120.

An identical hole was drilled only 1.2 m away with the new hammer, showing a significant reduction in drilling time. The 7 m length drill pipe took 21 minutes to install. This was followed by a second pipe which was drilled to a depth of 1.2 m in 3 minutes, compared with the local hammer which drilled the 1.2 m in 11 minutes. The rotation speed of the drill was 8 rpm.

Hybrid technology
On the second day of drilling, the QL 120 was tested a third time with even better results. A 7 m length drill pipe was installed in 13 minutes with a total drilling time of 34 minutes to complete a 13 m deep hole, start to finish, compared to the local hammer which took 59 minutes to do the job. The Atlas Copco compressor reading was recorded at 17 bar.

The QL 120 features a combination of valve and fixed port cycle which has proven to be a significant advantage. With the hybrid technology, the piston is powered for 80% of the stroke compared to 50% for most equivalent hammers.

“We were hoping to get more test data on a fourth hole, but the operator preferred to proceed only with the QL 120,” says test manager Hyun.

Operator Mr Jung added: “I’ve been drilling for 40 years and I know what I’m doing. Going forward at this site I will only use the QL 120.” Following the positive results, MihWa plans to conduct further tests with the Secoroc QL 120 in other drilling environments in South Korea.