A fleet of Atlas Copco ROC D7 surface drill rigs is paving the way for expansion at the Panama Canal. Two new giant locks are being built which will double the Canal’s capacity and substantially boost its revenues from international shipping. Each rig is equipped with the Atlas Copco hole quality system HQS MKI2.

The Panama Canal is one of the world’s most important international trading routes. Opened in 1914, it now enables more than 14 000 ships per year to travel back and forth between the Pacific and Atlantic oceans. But now, almost 100 years since the canalwas built, the Panamanian authorities are preparing to receive bigger, heavier vessels than ever before. It is predicted that the world will see a major upswing in seagoing cargo traffic over the next few years, and to meet this challenge the Panama Canal is racing to double its capacity. Two new giant lock facilities are under construction – one at the Pacific end and one at the Caribbean end – to accommodate bigger ships, and carrying out the necessary drilling and blasting work is a fleet of six Atlas Copco drill rigs. This fleet, made up of ROC D7 drill rigs is owned and operated by Jan De Nul of Belgium, one of four companies within Grupo Unidos Por El Canal (GUPC) in cooperationwith Sacyr of Spain, Impregilo of Italy and Cusa of Panama. 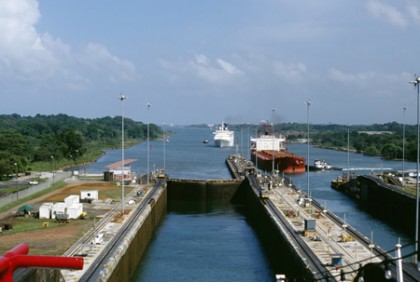