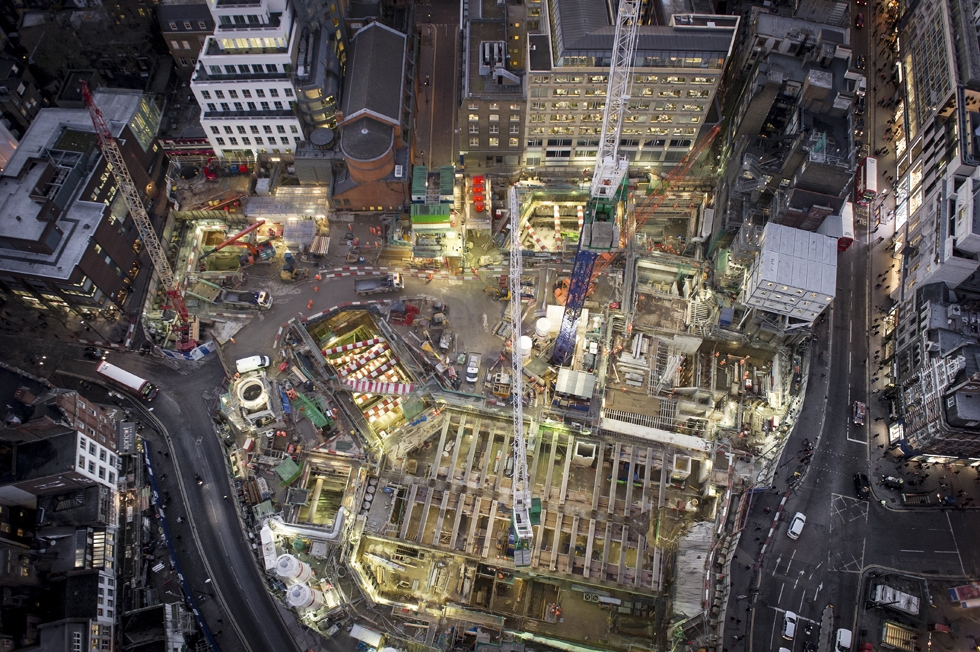 A major upgrade of the London underground system is currently taking place with compressed air and shotcreting equipment from Atlas Copco playing a key role in the construction work. M&C reports from Tottenham Court Road.

Tottenham Court Road is one of the busiest subway stations on the London Underground system, used by more than 150 000 passengers every single day.

That figure is soon expected to double, which is why this famous transit hub in the heart of London’s West End is now undergoing a complete makeover at a cost of more than EUR 500 million.

The project is being carried out for the city’s Transport for London (TfL) organiza­tion by the joint venture contractors Taylor Woodrow and BAM Nuttall.  It in­cludes:

Atlas Cocpo is supporting the contractors and playing an important role in the production process, both on the surface and below ground.

Two Atlas Copco compressors positioned on the surface of the site provide compressed air for the equipment being used in the tunnels, primarily Atlas Copco MEYCO concrete spraying equipment as well as drilling and chipping tools.

The GA132FF is a single-stage, fully integrated rotary screw compressor that delivers 7 bar of oil-free, dry air at the rate of 400 l/s via a built-in refrigerant dryer, a three-stage air/oil separator and oil filters housed within the compressor canopy.

This high quality, oil-free air is essential to the delivery of uncontaminated, fibre-reinforced liquid shotcrete to the walls and roofs of the new subway tunnels. It is introduced at the delivery nozzle to spray the concrete mix onto the receiving surface. This so-called wet-gun procedure produces less rebound and waste with the added advantage that larger volumes can be applied in a shorter time. By installing the compressors, Taylor Woodrow BAM Nuttall benefited from two completely fit-for-purpose machines, incorporating all the drying and filtration equipment needed to provide the required level of air.

As Ben Thomson, Tunneling Engineer at Taylor Woodrow BAM Nuttall, explains: “We felt it was the right decision to go with Atlas Copco who provided us with two new compressors and the reassurance of continuous, reliable performance, which is vital to our below-ground operations. Guaranteed air quality was the primary deciding factor – oil and concrete are not a good mix!”

Once the shotcreting phase is complete, the two compressors will be transferred to another well known London subway – Victoria Station – where the joint venture partners will also carry out a major upgrade of the facilities there.

As many as eight MEYCO spraying units have been  used at the Tottenham Court Road site for a range of different applications. These include three Suprema units

for shotcrete pumping, three Oruga units for general spraying works, and two Piccola units for dry spraying applications as well as the application of a Masterseal, waterproof membrane.

According to Jamie Hart, who manages  Sales and Technical Support at MEYCO in the UK, the contractors chose the equipment because Atlas Copco MEYCO is the market leader in shotcreting technology.

Explains Hart: “The MEYCO equipment working on the Tottenham Court Road station transformation is known for its robust quality, ease of operation and versatility. The very fact that it was chosen for such a prestigious and time-sensitive job is testament to the market leading MEYCO brand.

“The equipment worked in conjunction with air provided by the ever reliable Atlas Copco compressors and proved to be a great working relationship.”