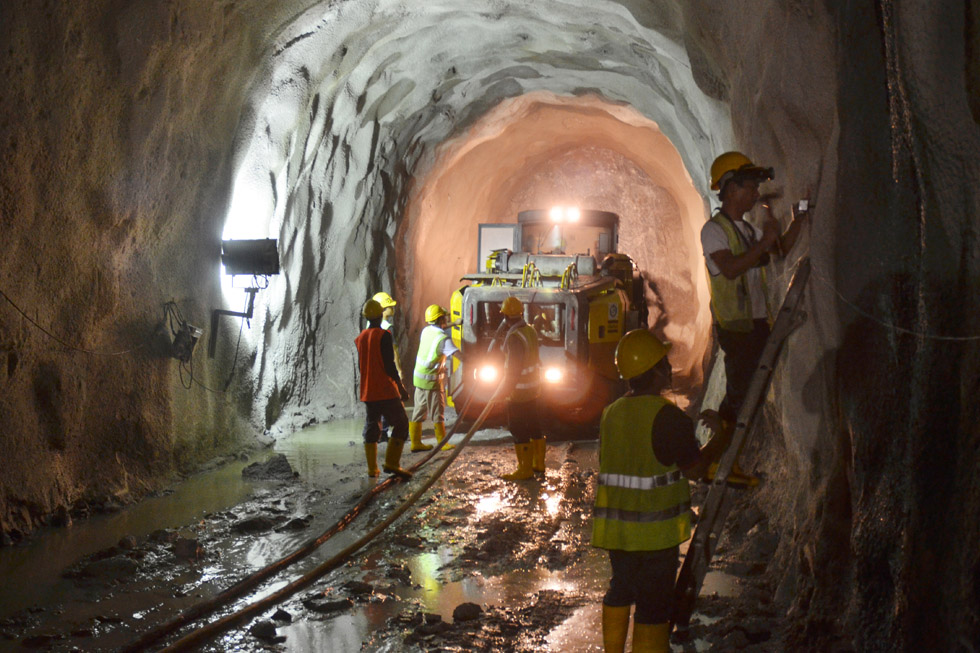 Conquering the Mountains of Malaysia

A project to boost water supplies for the Malaysian capital Kuala Lumpur is on schedule despite complex tunneling in mountain terrain and difficult ground.

The seven million citizens of the ultra modern Malaysian capital of Kuala Lumpur will probably never notice that their water supplies have been increased. But some won’t easily forget the difficulties of conveying raw water from the mountains to the city.

The project, known as the Pahang Selangor Raw Water Tunnel, was started in 2008 with the construction of the Kelau Dam on the Semantan River, northeast of the capital, by the Ministry of Energy, Green Technology and Water.

The project includes a 24 km2 reservoir as well as the excavation of a 5.2 m wide, –  44 km long diversion tunnel which will carry the water to a treatment plant on the outskirts of the city center. There the water will be treated for both domestic and industrial purposes.

The excavation work is on track to meet the 2013 completion date but complications and setbacks have frequently threatened progress.

Although the site is not far from the city “as the crow flies”, the  mountainous terrain in between presents major challenges.

NATM, the method of tunneling in softground with the emphasis on ground support, is used here for the four adits totaling 8.6 km, as well as for the 4 m x 4.7 m cut-and-cover culverts at each end, totaling 1 km. The remaining 34.4 km of the main tunnel will be driven by a TBM.

The adits (named NATM 1, 2, 3 & 4) will provide access for equipment and will be equipped with service facilities for drill rig maintenance, concrete mixing and water purification systems.

Besides water ingress, which in many cases can be as much as 10 000 l/min, inconsistencies in the rock formation presents other difficulties. For example, the Lepoh Fault that runs through the center of the project has fractured rock on both sides. At one point, the tunnel crosses under a river with a fractured formation causing even more water ingress and the need for additional stabilization.

The construction is carried out by the SNUI Joint Venture consisting of the four contractors Shimizu and Nishimatsu of Japan and UEMB and IJM of Malaysia.
Atlas Copco has been involved in the project from the start and has four Boomer face drilling rigs on site as well as ground engineering equipment.

About 1 000 people are on the site. One of them is Sudhan Bahadur Shreepali, a Nepalese Boomer operator with eight years of drilling experience. Although familiar with Boomer rigs it is the first time he has used the computerized Boomer L2C.

“The drilling here has mostly been predictable,” he says. “The east side rock is pretty good and the west side is less competent. The only real problem was drilling under the river but this rig made it easy.”

The drillers work two, 12-hr shifts per day and at the time of M&C’s visit, the NATM 3 adit was being advanced at a rate of 8 m per day, taking Shreepali approximately two hours to drill a round.

Three Boomer L2C rigs account for most of the drilling. These are equipped with COP 1838 ME rock drills and and use Secoroc 105 mm bits for the pilot holes and 45 mm bits for the blast holes. A Boomer 352 is also on the site.

SNUI Project Manager Takashi Kawata points out that after nearly two years, the NATM segments are either on schedule or as much as three months ahead of schedule.

NATM 3 was delayed due to its slow progress under the river, but quickly moved back ahead of schedule once it made it beyond the river. NATM 4 was also delayed due to  soft ground conditions, though for the most part, the rock has been consistent granite.

Kawata estimates that advancement with the Boomer L2C is 10 percent better than expected. “We have been getting good results with drilling and blasting,” he says, and adds that in some months, the rigs’  performance far exceeded expectations. For example, the plan for the NATM 2 adit was 138.3 m per month but actual drilling averaged 149.4 m  month.

NATM 1 was the only section that had fallen behind schedule due to heavy water ingress. Once the problem area was passed, excavation again outperformed forecasts for two consecutive months.

In addition to the drill rigs, an Atlas Copco COP 1838  ME rock drill is used for drilling 76 mm probe holes in advance of the TBM while all rock tools used on site are also from Atlas Copco.

With the high productivity of the equipment and the well trained drilling crews, the citizens of Kuala Lumpur may well be receiving their new water supply sooner than they expected.