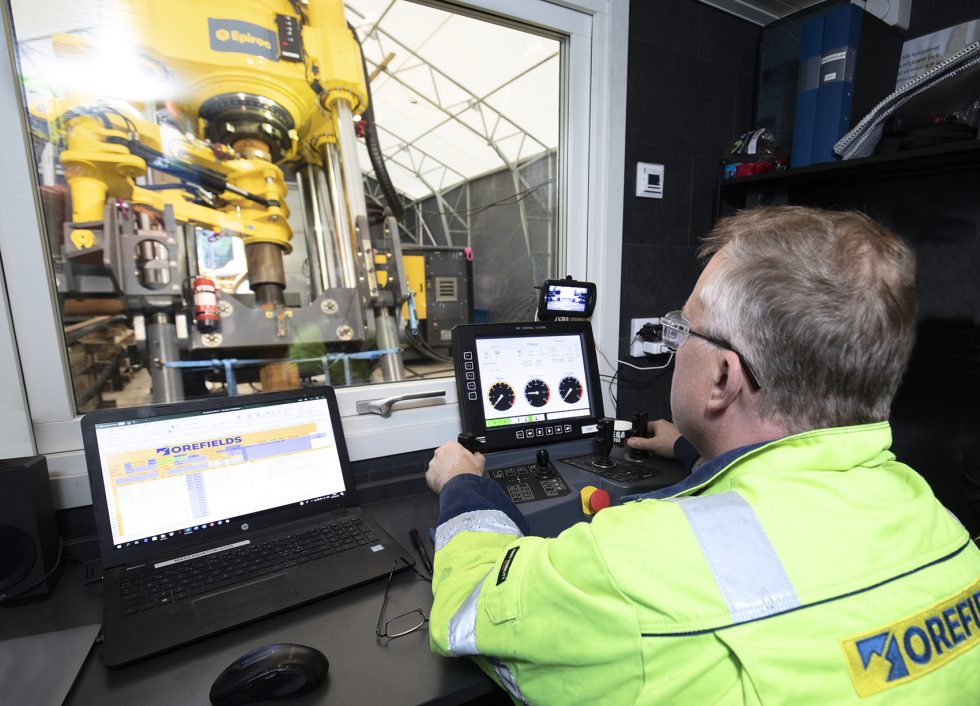 6 000 meters of ventilation shafts are being drilled into very hard rock in the Kemi Mine in Northern Finland. The conditions have been even harder than expected, but with Epiroc’s Robbins 123RH rig, Orefields Raise Boring AB has been able to meet the rigorous demands of their client.

Martins are spinning above the Kemi Mine in northern Finland. They enter and exit a tent, which is put up close to the main entrance. Birdsong fills the air, but closer to the tent one can hear a constant, yet moderate rumble.

The sound comes from a Robbins 123RH rig, that is drilling a 560-meter-long ventilation shaft inside the tent into very hard rock, currently 275 meters beneath the ground. The shaft serves Kemi Mine’s next mining level at 1 000 meters.

Senior supervisor Anders Jonsson from Orefields Raise Boring AB sits in a tidy cubicle in front of a 4-meter-high machine, and observes the net force and torque from a computer screen. 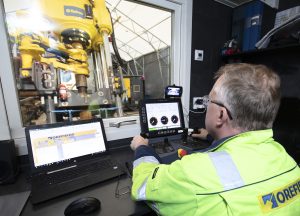 “When everything is going nice and smoothly like this, my work is like watching a painting  dry”, he states smiling. “The machine does its work and all I have to do is to observe and keep my ears open. If the rig gets a bit nervous and the sound gets rougher, I know the reamer has hit a harder layer. I then have to adjust the torque remotely.”

The reamer advances steadily 40 centimeters per hour. When Jonsson sees from his monitor that the drill has risen another 1,5 meters, it’s time to stop the rig and remove one more drill pipe. About every three to four hours, Jonsson loosens the top drill pipe adapter remotely from his cubicle. When the 1,5-meter-long drill pipe has been removed from the rig, it’s driven to the bench close by.

Jonsson adjusts his earmuff just before a loud thump fills the air for a short moment. He then steps out of his cubicle, climbs up a few stairs and adds some grease to the thread.

The process is now 1,5 meters closer to destination, but there are still tons of drill pipes working their way up underground.

Orefields took in the assignment at the Kemi Mine a bit over eight months ago. They knew from the beginning, that conditions were going to be challenging.

It was clear that Epiroc’s Robbins 123RH was the right choice for the commission.

“We got some information about the site beforehand, but conditions have been even harder than expected”, admits the CEO of Orefields, Johan Tingström.

He picks up a piece of quartz from the ground behind the tent. That white stone is one of the hardest they have encountered in Kemi Mine. 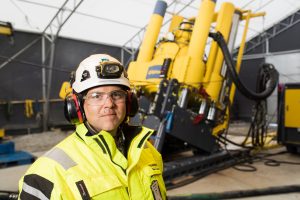 “There can be a 20-meter layer of this, and then 20 meters of softer soil. The Robbins 123RH rig is by far the most powerful machine for these conditions and capable of doing large shafts like this one. We find the drill’s advancement speed very good considering the conditions.”

The effectiveness is based on the combination of torque and force.

“It first drills a smaller pilot hole all the way from surface down to the tunnel. A large reamer then replaces the pilot bit at the bottom end of the drill string and is then pulled upwards with great force and rotation. The method creates a smooth wall surface which allows better air flow in the ventilation shaft when it’s in use. As it doesn’t involve explosives, it is a safer and more predictable method”, Hansen explains.

Jonsson and Tingström are also happy about the smooth operation allowed by the hydraulic drive motor system. The 67 degree-angle allows the rig to be placed far from the actual exit hole, which adds up on security. 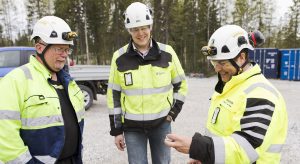 “The mine allows 2,5% margin of error in the final angle of the shaft. In this particular shaft the result has been far above the requirements. We have a 0,95% deviation, which is not a lot for a 560-meter-long shaft”, Tingström says proudly.

Orefields’ 3-year-contract at Kemi Mine is its biggest so far. All in all the company will drill 20 shafts, which adds up to almost 6 000 meters.

For a small, constantly growing company such as Orefields, it is essential to meet all the requirements perfectly. Experienced staff, clean and safe working environment and reliability are crucial for building up the reputation.

“Robbins 123RH has met our standards and is performing well for our needs. We have been able to keep up the schedule and conduct even the most challenging tasks. With the Robbins 123RH we continue to be in the front of technology within raise boring machinery”, Tingström says.

Tingström is also happy with the collaboration with both Kemi Mine and Epiroc.

”Epiroc has an office in Kemi, which is close to the mines in the Northern region. As well as delivering us a machine that fulfills our needs, support is always close too if needed.”