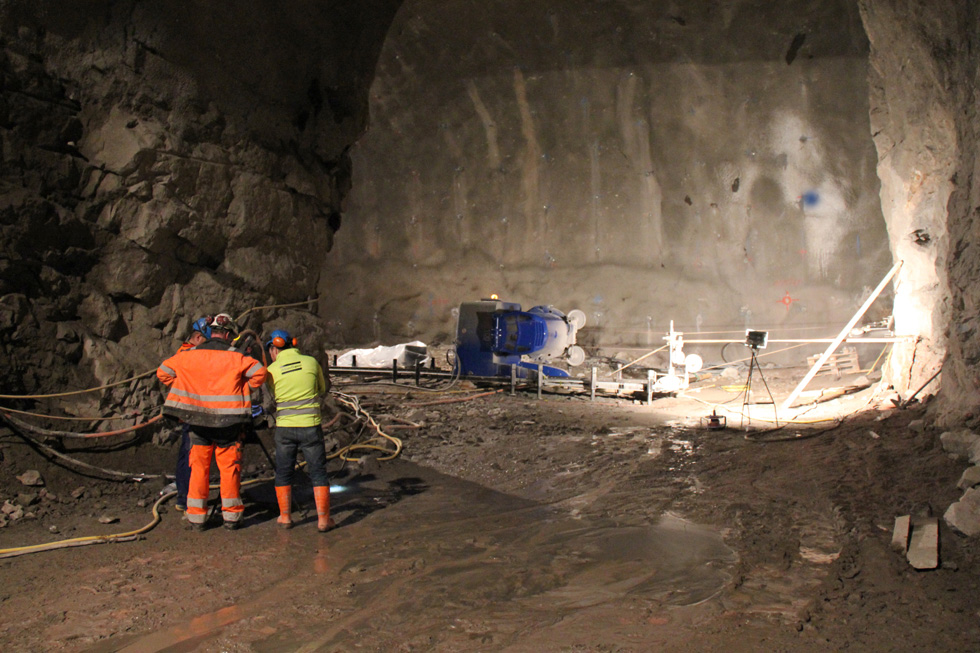 Dimension stone
Keeping the peace in Stockholm: The SpeedCut saws out the rock to make way for a new subway tunnel without creating disturbing vibrations.

On the cutting edge

Atlas Copco’s diamond wire saw is causing a buzz as it migrates from dimension stone quarries to urban development applications. The latest generation SpeedCut is proving to be the world’s fastest, most versatile rock cutter.

When the diamond wire saw was first introduced in the 1980s, it rapidly gained popularity in the dimension stone industry (DSI) and in surface quarries. Production levels increased and the technology continued to be improved. Now SpeedCut is migrating into new areas.

With the acquisition of Perfora of Italy in January 2012, Atlas Copco provides a wide range of rock cutting equipment. The jewel in the crown is SpeedCut – the world’s fastes-t rock cutter which saws at a speed of 120 km/h under average conditions.

As more and more infrastructure projects get underway in urban areas that are sensitive to vibration and noise, the ability to carefully cut and remove large slabs of rock is becoming a popular alternative to drilling and blasting. A case in point is the City Line project in Stockholm, Sweden, which is built on 14 islands and steeped in history.

Here, underground operations are taking on a new dimension as the city is under-going a major upgrade of its commuter transport system. Scheduled to open in 2017, City Line will double the passenger capacity and improve the overall flow of Stockholm’s public transport system.

The project involves the construction of a 6 km tunnel, some sections under water, with a number of adjoining stations. Moreover, it will run through the heart of the city just meters away from existing subway lines and directly below historical buildings,
many of which are listed as heritage sites.

On the island of Riddarholmen, 3–6 m below ground, large sections of rock had to be removed to make way for the new tunnel. As a rule, drilling and blasting is the method of choice in the hard Swedish granite, but the risk of endangering the foundations of nearby structures was too great.

The answer came in the form of SpeedCut and the latest generation diamond wire saw operated by Norrbottens Bergteknik AB, a drill and blast company that also specializes in cutting rock.

“Wherever vibrations are a problem, this diamond wire machine is the perfect solution,” says Leif Arvidsson, Project Manager for Norrbottens Bergteknik. “We were very happy with the way the machine performed, we didn’t break any wires and downtime was minimal.”

Slicing through the rock at a rate of 7–8 square meters per hour, the SpeedCut completed the delicate task within two weeks and without damaging buildings or installations.

“Perfora has a great range and with Atlas Copco we know that we can rely on getting complete support wherever we are working,” he says.

At another site, north of the city center and in a densely populated area, SpeedCut was used for horizontal cutting of so-called “blind cuts” by sawing through a series of tightly positioned drill holes, only a few meters away from the 113 year-old church of St Matthew.

Here too, Norrbottens Bergteknik was engaged to apply its expertise to help build the foundations for a new station that will connect to City Line through a 60 m long tunnel at an incline of 30 degrees. With vibration restrictions set at 22 mm for the church compared with 70 mm for other nearby buildings, wire cutting proved to be the ideal solution.

Andreas Christoffersson, Managing Director of Norrbottens Bergteknik, points out that the flexibility which the technique brings makes it an invaluable resource for contractors. “It’s a smooth job that can be performed even during the night time as the  noise  stays well within decibel limits,” he says.

Christoffersson adds: “The wire makes a buzzing sound during the first incision but as it works its way through the rock, you barely notice any noise or vibration. Furthermor-e, the machine is powered by electricity so there are no diesel engines running.”

Under normal conditions, a wire lasts for approximately one week, or 200–300 m before it has to be replaced. The most commonl-y used wire is 11.2 mm in dia-meter and equipped with 35 diamonds per meter.

With a cutting speed of up to 45 m2/h, SpeedCut is the fastest diamond wire cutting machine on the market. Its unique, patented wire tensioning system makes it possible to combine high cutting speed with low wire consumption.

This enables constant tension to be placed on the wire irrespective of a surge in water flow, a drop in electricity supply, non-homogeneous material and other variable conditions. The Panel Machine Interface and connection cable are easy to handle and allow the machine to be controlled from a safe distance.

SpeedCut can cut both vertically and horizontally and close to ground level. Furthermore, its main flywheel can be rotated 320°. As a result, it can make parallel cuts with a maximum distance of two meters without repositioning.

Optimal performance is ensured with full documentation and control of the cutting parameters and cutting processes. Working parameters such as cutting time, wire performance and error code lists can be easily downloaded to a computer via a USB memory stick. The Speedcut will be rebranded with Atlas Copco colors (yellow and grey) from September 1, 2012.