Palin Granit’s granite quarry in Ylämaa, Finland is an amazing sight to see. The smooth, sparkling boulders of Baltic Brown granite are lined up, the drillrig drills new blocks for removal, and the diamond wire cutting machine works it into smaller parts. A customer from Italy ambles between the rocks, selecting the right choice.

From the start, Palin Granit has been a family-run, Loimaa-based Finnish company. Its story begins in 1921, when the itinerant stonemason Antti Palin established a stoneworks facility in the town. The crude stone was transported to the stoneworks facility by train and horse carriage, and was formed by hand into cemetery headstones by Antti Palin. The company’s current domicile is Lappeenranta, and Heikki, its CEO, represents the third generation of Palins. A great deal has occurred in almost a hundred years: machines have replaced the work by hand, and Palin Granit’s business operations have changed from that of a stone refinery to raw stone production. The largest export nation is China with a 60% share, followed by Italy, Spain and Egypt. Finland’s share is also increasing. 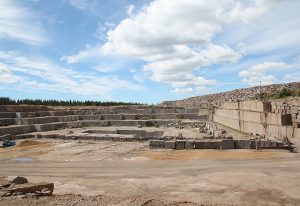 The demand for Finnish granite has declined from its peak years, but the belief in stone as a raw material on the part of fourth-generation representative, Business Developer Kira Palin, is solid. “Stone is an ecological material with a perpetual lifecycle and minimal maintenance requirement,” Kira emphasises.

Baltic Brown, which is mined in Ylämaa, usually goes to large projects, such as skyscrapers, facades and indoor spaces. The sector is heavily cyclical and dependent on cycles and trends; and recently, ceramics and artificial stone, for example, have taken the place of real stone. As a producer of raw material, Palin Granit does not always have information on where the end products finally go, and a familiar type of stone may, surprisingly enough, be occasionally encountered in, for instance, the floor of a building in Shanghai.

Stone is a natural material, and its character includes the element of surprise. Only intact blocks are valid for export, and because of the fragmentation of the stone, its efficiency is low: the goal is that 20% of the stone can be utilised. Attempts are being made with waste rock to develop its practical use in, for example, the form of crushed rock, or larger chunks for embankments or surrounding walls.

It has been possible to raise the efficiency of stone production acceptable for processing by developing methods for the purpose. In 2014, Norwegian partner Lundhs introduced Palin Granit to diamond wire cutting and slot drilling, formerly used, has now been completely replaced by cutting, which has brought many benefits. “In addition to better quality, cutting is cheaper and faster, less dust is generated, and there are savings in the costs of explosives,” Pauli Salmela, Technical Director, says, listing the benefits of cutting. Mr Salmela anticipates that the amount of cutting will increase all the time, and new operations are being planned that could be replaced by cutting.

Their first diamond wire cutting machines were the Italian Pellegrini brand, but in 2016 the brand was changed to Epiroc (Atlas Copco). The change of brand was decided by Epiroc’s close-at-hand maintenance, even if diamond wire cutting machines are relatively service-free. At the moment, there are two Epiroc SpeedCut machines in use which can cut both vertically and horizontally. 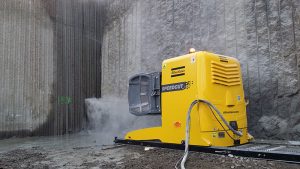 In June of this year, the Epiroc SpeedROC D30 drill rig was introduced. SpeedROC is used to drill vertical and horizontal pilot holes for SpeedCut, and it is designed to increase the use of cutting also at new work stages. The horizontal holes to be drilled are 30 metres long, which corresponds to a dimension of four granite blocks and a diameter of 72 mm.

The work methods have been revised over the last few years, and according to Pauli Salmela, this development certainly has not ended. “After a few years, the methods will surely be different again,” Mr Salmela forecasts.