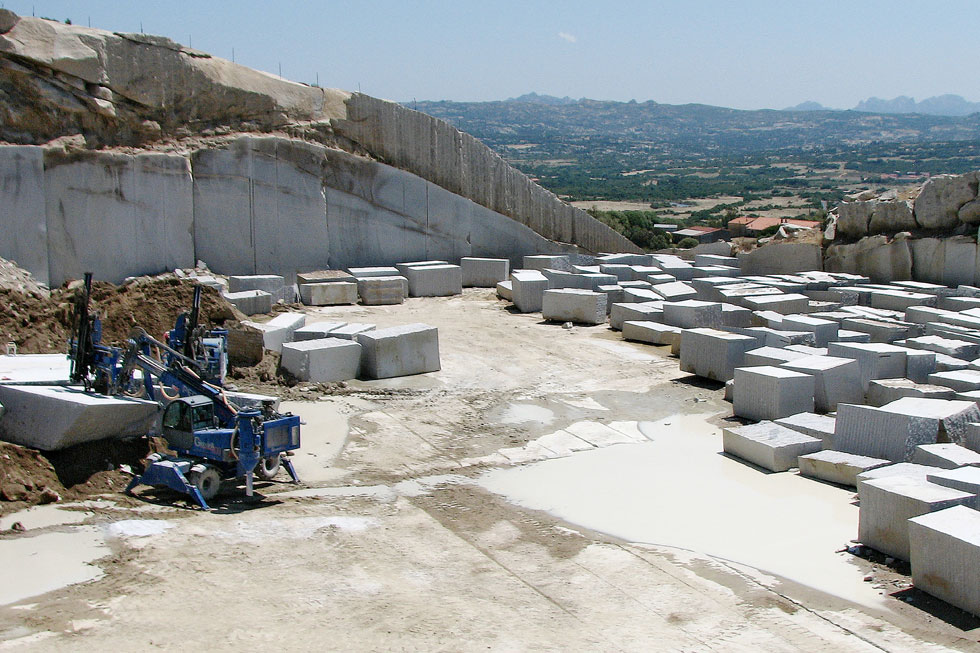 Dimension stone
Perfora offers various types of products for the dimension stone industry, like block splitting tools such as here at the Comita quarry in Sardinia.

The recent acquisition of Perfora S.p.A of Italy marks a renewed commitment to the global dimension stone industry, giving specialists in this field access to Atlas Copco’s drilling and product development knowhow.

Atlas Copco has now made a major new commitment to the dimension stone industry (DSI) with the acquisition earlier this year of the Italian specialist Perfora, a company that manufactures and sells DS cutting and drilling equipment.

Bob Fassl, Business Area President of Atlas Copco Mining and Rock Excavation Technique says: “Perfora is a leading supplier in this segment, with a strong customer focus and high quality products. As part of the Atlas Copco Group, Perfora now becomes a unique, global supplier of tailor made equipment for dimension stone producers.”

Despite global economic difficulties, the dimension stone industry is growing and natural stone materials are in demand for building and decoration whenever it is economically viable. In addition, dimension stone quarries are now shifting from pneumatic to hydraulically driven and automated equipment.

“The acquisition of Perfora is therefore good timing,” he explains. “Together we will be able to offer modern equipment to a growing worldwide market. Our goal is to become the No. 1 global player of tailor-made DSI quarrying equipment.”

Prior to the acquisition, Perfora was a privately owned company based in Bagnolo, northern Italy, with some 43 employees and annual revenues of about EUR 10 million.

The company’s products, which include diamond wire saws and drill rigs specially designed for dimension stone applications, are distributed through direct sales and local distributors in selected countries.

Perfora is no stranger to the Atlas Copco Group. The two companies have cooperated for the past two years in the production of the FlexiROC T20 R surface drill rig. This has been a highly successful joint venture.

Piergiorgio Picotto, Managing Director of Perfora, told M&C: “Atlas Copco has a widespread distribution network in key markets and an organization that can offer improved services to our customers.

“We also see potential synergies in product development that will allow us to maintain and strengthen our position in the DSI segment.”

Perfora’s legal name will be changed to Atlas Copco Stonetec but it will continue to be known by its customers as Perfora for the foreseeable future.

Perfora hydraulic mobile drilling units are highly successful in Italy and among the company’s many satisfied customers are Virginio SRL at the Comiti quarry in Sardinia and the Augelli family, which runs the Augelli Marmi quarry in Puglia.

The Comiti quarry is worked on four levels using three Perfora Girodrill 200 rigs, a Rock Buggy and two Speed Cut 100 cutters. The process starts with horizontal and vertical drilling with a Rock Buggy. The bank is subsequently wire cut using the Speed Cut 100. Finally the Girodrill is used to square off the granite blocks.

Antonello Lucianu, Virginio’s owner, says: “We have been working in this sector for more than 25 years, extracting granite blocks and selling them throughout the world. Our objective has always been to produce quality. Since I took charge 12 years ago we have aimed to use the best available technology, and the real turning point for us came when we stopped working with ‘our hands’ and started to drill and cut with Perfora machines,”

The arrival of Perfora products was also a defining moment for the Augelli Marmi quarry. Owned by Michele Augelli and his son Leonardo, the company’s continuous investment in technology at its various deposits across the country has made it an  industry leader in decorative stone, marble, granite, traver­tine and onyx.

“Most of the time we use the Perfora hydraulic drill for the initial squaring of the marble block,” explains Michele Augelli. “After that, a second squaring is carried out with a single blade or disc, followed by the cutting of slabs with a gang saw. We also rely on the Handdrill 100 for horizontal drilling of blast holes to remove the material from the face. Up until 2001, we carried out the first squaring with helical diamond wire.”

He continues: “Perfora’s hydraulic drilling units have revolutionized our operations. We put down our jackhammers and diamond wires and let the blue units take their place. Previously, in order to drill a series of holes on a 10-meter bank, we needed four people for two days. Now it takes only one person one day to do the same job. These machines have also increased our mobi­lity in the quarry and make it possible to work the rock mass from any point.”