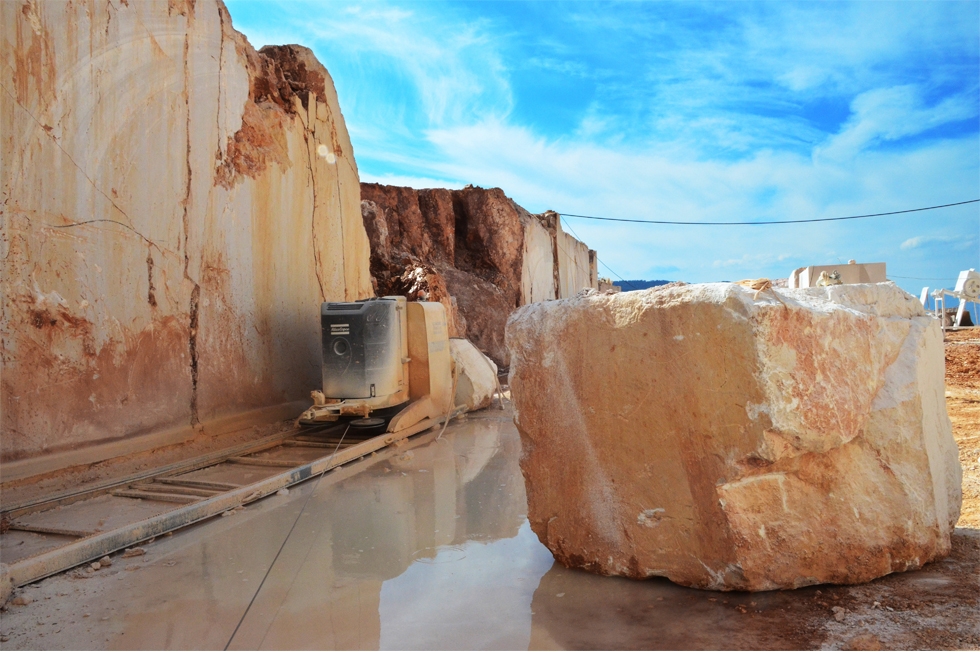 Speed and safety, as in many industries, are essential to the production of fine marble. In Turkey, leading supplier Karmersan gets the perfect balance. In the marble industry, speed and safety are key issues. On the one hand, companies increase their production in order not to fall behind their competition. On the other, they have to prioritize safety and quality.

In this sense, the cutting speed and qualit­y of wire saw cutting machines in the quarries are significant factors in helping to minimize production costs.

Turkey is the world’s fourth largest exporter of natural stone and Karmersan is a leading supplier. Established in 1993, the company owns and operates several quarries and plants across the country. These include the Harmankaya quarry, near the town of Burdur, which has been in operation since 1997, and the Sütçüler quarry in the southern region of Isparta, which has been operating since 2010.

During a recent visit to the Sütçüler quarr­y, Salih Kaya, Executive Board Chairman of Karmersan, explained that the beige marble produced here is in high demand, especially in China. The Karmersan quarries employ 400–500 people, depending on its needs, and have a production capacity of 1.2 million m2. At the time of writing, the company operated a fleet of some 50 machines, including 12 SpeedCut wire cutting machines from Atlas Copco which have the biggest influence on productivity and production costs.

The SpeedCut machine was introduced to Karmersan about two years ago and has since had a major impact on the success of the business. Kaya explained that speed and safety were the two most important reasons for choosing the SpeedCut and that it soon proved to have many other benefits, too.

“It’s easy to handle, it can make parallel cuts with a distance of two meters without repositioning, it has an aesthetic and functional design and it is easy to set up as the tracks can be lifted together with the machine,” he said. Another important advantage, says Kaya, is that the operation menu on the SpeedCut’s remote control unit has a Turkish language selection, making it easier for the operators.

The machine’s rotation torque also makes the work easy. “With conventional cutting machines it is often necessary to stand on the wire in order to get it moving,” he explains. “This isn’t necessary at all with the SpeedCut due to its excellent rotation torque. Added to this, the sensors recognize when the wire is broken and the machine automatically stops in order to protect itself and the workers, and when it reaches the end of the track it automatically stops again.”

Production up, costs down

The SpeedCut quickly proved that it could work three times as fast as any other cutting machine on the site. It cuts an average of 25–30 m2/h in cuts of 150–200 m2, and in two years has helped to increase the quarry’s production from 1 500 to about 10 000 tonnes per month.

Although the initial investment was a little higher than for similar machines on the market, Kaya says he is convinced that the payback time will be short. “This machine has increased our production and also reduced the cost of items such as labor, electricity and water, as we do  more work with fewer machines,” he says. In addition, cuts that previously took 28 hours, now take 8–9 hours to complete.

Continues Kaya: “I was certain that it would be a good investment, so I followed up personally and saw that on average it does three times more work than any other machine we have used before.

“Not only has production increased, but so has the quality of our product because the SpeedCut achieves consistently clean and smooth surfaces. We now do almost all of our stone cutting with the SpeedCut, and I believe that many other quarries in Turkey will also start using these machines soon.”

From the safety perspective, Kaya says the SpeedCut is “well equipped”, noting that the air filters keep the inside of the machine clean. “It’s important in the quarry to keep the electronic equipment dust-free, and SpeedCut does that by itself.”

With conventional machines, cavitation, or so-called “dishing”, may occur due wire sagging, particularly with large-size, horizontal cuts. This requires extra cutting, and also disrupts the working edge of the lever-type chain cutters.

Kaya continues: “The biggest problem is wire breaking, but the SpeedCut’s system is protected against this. Since it works depending on the load on the wire, it automatically stops if there is a risk.”

Atlas Copco Stonetec products’ Eagean dealer, Esisan Company, is providing the service and maintenance and also trains the operators. Kaya says he is satisfied with Esisan’s work, adding: “It’s important that the operators know the machine well, and training is not just carried out once. Esisan comes and trains us whenever we ask for it.”

Gürkan Burak Buyurgan, Atlas Copco’s Surface and Exploration Drilling Business Line Manager, notes that Turkey has almost 40 percent of the world’s reserves and that the quarrying of marble, travertine and granite is a major industry.

“Modern equipment is essential in this business,” he says. “In addition to our SpeedCut wire saw machine and the new SpeedROC drilling machine, which is specially developed for marble quarries, we aim to provide our customers with the lowest total cost of ownership in the industry as well as maintain the highest level of custome­r satisfaction.”