The A3 is one of the most frequented motorways in Germany and suffers from growing traffic volume. As part of the extension to six lanes, the 540 m long bridge crossing the river Main near Randersacker was blown up. The demolition material was removed in record time.

Company Ruppert from Frickenhausen used their fleet of Atlas Copco attachments: Eight Atlas Copco medium to heavy hydraulic breakers with service weights of 1200-7000 kg demolished the material. Another six hydraulic pulverisers were crushing the fragments on the spot. On the other side of the Main a railway track intersects with the old bridge, where blasting is prohibited. Two CombiCutters CC 2500 U and CC 3300 U have been purchased for the use on longfront excavators in this section.

The B13 was already cleared after only 36 hours, so that the road could be opened to traffic 25% ahead of schedule. “With these attachments we will also be able to cope with the rest of the 22.500 m3” says Florian Ruppert, Manager of the company. “We expect to complete the job within four months.” 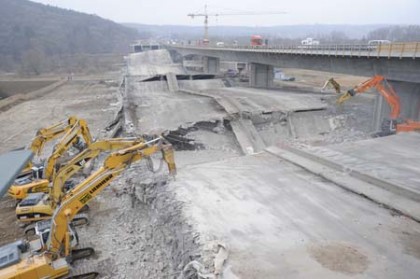