Founded in 1965 by Richard Mancini, Ric-Man Construction Inc. has specialized in heavy underground and tunnel construction. Recently, the company has ventured into caisson work with construction of a combined sewer overflow facility in Dearborn, Michigan. Designed to hold 13,2 billion litres, this facility is one of the larger ones currently under construction in the region.

“The facility we’re constructing is designed to handle combination sewage when there is a wet weather event and the system backs up,” explained Duane Mullica, COO with Ric-Man Construction. “Prior to overflowing, there’s an internal structure within the system that releases the flow into this facility, which will store, pretreat and screen the solids. Once the water treatment plant can handle the additional flow, it’s pumped out of this facility, back into the system and into the treatment plant.”

The project began in January 2008 with a substantial rock grouting and stabilization program. The water elevation is actually higher than the ground elevation in this area, so this phase was necessary to eliminate any water infiltration during excavation and construction of the caisson, which began in January 2009. The self-sinking caisson was poured in eight separate vertical lifts. Ric-Man used six Atlas Copco BBC 34W pusher leg mounted rock drills from Stockdale Mine Supply to drill more than 400 holes for bolt installation in the vertical face of the rock during construction of the caisson wall. The rock bolts were used to secure wire mesh to the face. Ric-Man than sprayed 15 cm of shotcrete to seal off the rock, and then the final concrete was poured.

Lift 8 of the caisson was on bedrock at – 42 meters. To pour the caisson’s bowl-shaped slab, Ric-Man would have to remove and excavate 11.000 cubic meters of bedrock, or an additional 15 metres of material.

At this point, the construction team had to decide whether to drill and blast the bedrock for excavation, or bring in hydraulic breakers to accomplish the task. They went with the breakers.

“Our real challenge with drilling and blasting at this site was the fact that it’s a residential area,” said Mullica. “The cost and logistics of trying to blast, reassuring the residents and making them comfortable that there will be no damage to their homes and the infrastructure – the complications grew as we talked about it. It’s also a safety issue. You need to have so much training and more insurance. We felt there had to be a way to do this besides blasting.”

Most projects in the Dearborn region depend on drilling and blasting to remove bedrock, so there was very little history to refer to regarding mechanical removal or excavation. So, Ric-Man began extensively researching hydraulic breakers and reached the decision to contact Atlas Copco distributor AIS Construction Equipment, which pointed them in the direction of Scott Hendricks, Area Sales Manager for Atlas Copco.

“AIS and General Manager Dave Pytlowany have done a great job,” said Steve Mancini, president and CEO of Ric-Man Construction. “You pick up the phone and they are right on it, even helping us set up the hydraulics.The availability (of the breakers) and the historical data supported our challenge,” added Mullica. “We were extremely comfortable when we finally committed to Atlas Copco.”

To begin the process, Ric-Man lowered two Atlas Copco ECM 590 drill rigs into the caisson to predrill 600 relief holes into the bedrock. The 5 cm and 7,5 cm holes were drilled to a depth of 14 meters on 1,2 meter centers. Relief holes make it easier for the hydraulic breakers to break the material by giving the impact energy somewhere to go, increasing productivity. Without the relief holes, the solid bedrock would just absorb the impact energy.

Once the relief holes were drilled, Ric-Man brought in a 77 tonnes Koehring 1066 excavator to handle first the HB 7000 and then the HB 10000 hydraulic breakers.

“About five years ago we dismantled the entire excavator and went through its pumps and drive motors, and installed a new four-stroke Detroit diesel in it. It’s really an upgraded unit,” said Mancini. “The benefit of this excavator model is that it has about five different pumps so it’s not too difficult to mount any attachment.”

Ric-Man initially started using the HB 7000, but then opted to bring in the HB 10000 to increase productivity on the bedrock. “Working with the HB 7000 and the HB 10000 has gone extremely well,” said Mullica. “In fact, it is as good as, or even better, than we anticipated. We’re able to break, muck out and dispose of material as fast as we can.”

Added Mancini, “We have been extremely impressed. It’s been working well, and we’ve gotten into a couple of really hard layers. We are on schedule and Atlas Copco’s support of the HB 10000 has been very helpful to us.”

The inside diameter of the caisson is 32 meters, and Ric-Man had to remove bedrock to a depth of approximately 13 meters. The layers of bedrock have varied in hardness, though at some levels it has exceeded 12,000 psi. Ric-Man has averaged 170-260 cubic meters a day, and about 5 feet per week horizontally, although in the extremely hard material it took eight days to do a 1,2 meter section.

Mancini points out that they could have drilled and blasted the center core had they not achieved the production rates with the breakers. “We would still have had to break the outer ‘donut’, and we would still have had to deal with logistics and time delays to survey all the homes, survey all the utilities, etc. It just made more sense to stick to our breaking schedule. “Furthermore, Gene Bowers, our general superintendent, has spent almost his entire career dealing with rock removal. His experience brought a lot to the table and enabled us to drill it correctly.”

Ric-Man completed excavation of the bedrock by December 2009 and then poured the base slab of the caisson. The final lift, lift 9, was the caisson’s cap, which sits at ground level. Caisson construction was completed in April. Following that, Ric-Man completed all of the sewer connections, bringing the interceptors to the structure. They also built the control building on site. The final phase of the project will be landscaping the site; the entire project was scheduled for completion by July 2010.

“The quality, experience and method we chose to complete this project puts us in the running for others of this type,” Duane Mullica said. “We were able to foresee some of the challenges because of what our competitors had gone through. We looked at them early on and tried to figure out what our challenges would be and how they would be addressed.” 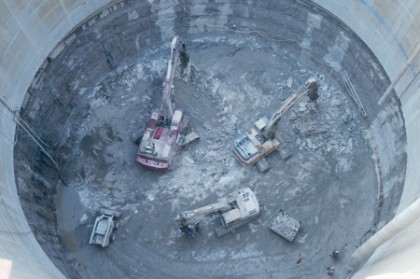