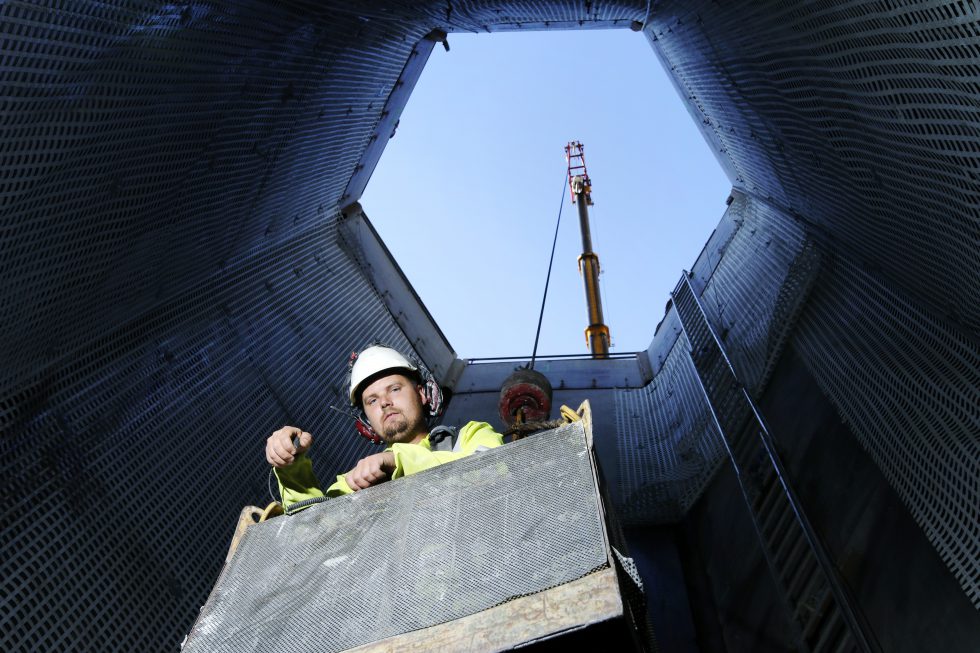 Bohus Bergsprängning has created a 22-meter deep shaft and a 7-meter long cross tunnel in Röda Sten in Gothenburg. The shaft was made entirely without blasting, instead using a wire saw from Atlas Copco.

When regional company Gryaab needed an evacuation tunnel from its existing tunnel in Röda Sten in Gothenburg, the job went to Bohus Bergsprängning.

The shaft was 22 meters deep. A seven-meter long cross tunnel, measuring 2.5 by 2.8 meters was cut between the shaft and Gryaab’s tunnel. All with no blasting at all.

“The cross tunnel could not be blasted. Vibrations could have damaged sensitive equipment in the existing tunnel. For this reason, and taking the surroundings into consideration, because there is a quayside here that is popular in summer , we proposed to the customer than the entire job should be completed using a blasting-free method,” says Andreas Haugerud, who is Bohus Bergsprängning’s site manager at Röda Sten.

This project is unlike anything that Bohus Bergsprängning has done before.

“Cutting down beside a tunnel and then creating a sideways tunnel, just with a saw – as far as we know nobody has ever done that before,” says Andreas Haugerud. Roger Johansson, Managing Director of Bohus Bergsprängning, is happy with the way the project has gone.

“We have cut many shafts out before, but we have always blasted. So this has been a very unusual job for us. The work took about six months to complete and it has gone well throughout. We had to make a lot of narrow cuts and it took care and concentration, but it went very well.”

The only problem during the course of the work was that the rock did not hold together as expected when the pieces were to be lifted out. This meant that more – smaller – pieces had to be lifted, which took longer than planned.

Bohus Bergsprängning used a SpeedCut 100 wire saw from Atlas Copco for this project. The company has two wire saws of this type among its equipment.

Facts about the SpeedCut 100 The fastest diamond wire cutting machine on the market. It creates a perfectly smooth face on the block and is capable of cutting both vertical and horizontal and close to ground level so as to produce an even bottom.