Five Atlas Copco attachments are involved in the construction of Leipzigs City Tunnel, providing the much-longed-for north-south link right through the city. Below the future Central Station and Bayerischer Bahnhof auxiliary structures set up for the tunnelling operation are being demolished.

Atlas Copco customer Kafril GmbH from Großzschepa, 40 km east of Leipzig, had to remove the auxiliary structures under the Leipzig Market Square after completion of the tunnelling job. The company uses three Atlas Copco hydraulic breakers, two HB 2500 and one HB 2200.

Some 20 meters below the surface more than 4,000 m3 rebar concrete were demolished. These structures were temporarily erected as the station’s entrance and exit for the tunnelling machine. Another two Atlas Copco CC 3300 hydraulic CombiCutters were used to cut the concrete and rebar in one go.

The tunnel is a century project, tunnel solutions and elevated railway lines have been checked and rejected several times. In January 2007 the tunnelling machine „Leonie“ started to dig its 22 m deep way through the city of Leipzig. In the meantime the tunnel is 4,010 meters long. The two single-track tunnel pipes with a diameter of 9 meters are designed for speeds of up to 80 km/h.

The finishing line is almost reached: the official tunnel inauguration is planned for 2012. Then passengers will be able to reach their destination inside Leipzig up to 20 minutes faster – and protect the environment while not using their cars. 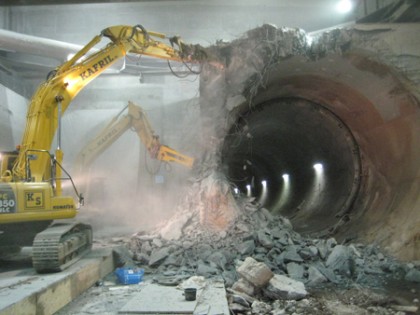